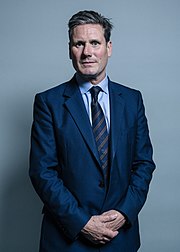 Keir Rodney Starmer (1962–) is a former barrister and a British Labour Party MP. He's been the Labour Party leader since April 2020, replacing Jeremy Corbyn. Prior to becoming leader, he had served as the party's Shadow Brexit Secretary and was a strong advocate for the ultimately unsuccessful cause to hold a "People's Vote" (referendum) on the agreement reached with the European Union. Despite initially running as a broad "unity candidate" in the leadership contest, this was ultimately a hope voided with a party who are in a constant, factional cold war. As of now, he is now largely favoured by the party's "soft left" faction, and somewhat by the centrists. Many of the more hardcore lefters really do not like him.

Prior to entering politics, Starmer was a human rights barrister, a career defender before becoming Director of Public Prosecutions. He has been involved in high profile human rights cases all over the world, with pro-bono work in challenging the death penalty, with significant contributions to efforts throughout Africa, Asia and the Caribbean. He was a founding director of charity 'the Death penalty Project'.[2] Of note, he helped in winning appeal against the government for two environmental activists at the ECHR as part of the McLibel trial, the longest running libel case in British history.[3] He was Director of Public Prosecutions for England and Wales, which is the head of the Crown Prosecution Service from 2008 to 2013. In the 2014 honours, he was awarded the honour of Knight Commander of the Order of Bath,

one of the highest orders of chivalry, for his legal work. From this, he is often referred to in the British press as Sir Keir Starmer, though he prefers not to use the title.

Starmer was appointed Shadow Brexit Secretary in 2016. His legal expertise empowered him to scrutinise the finer points on the government's plans with trade agreements and the adoption of various EU laws post-Brexit.

Following the results of the December 2019 election, Corbyn announced his intention to resign. Starmer was elected as Labour’s new leader on 4 April 2020.[6] Starmer (and his competitors, Rebecca Long-Bailey and Lisa Nandy, whom he tried to stand between ideologically) learned of the results via email; the conference where the results were due to be announced was cancelled due to the coronavirus outbreak. Long-Bailey (endorsed by the leftmost wing of the party) and Nandy (endorsed by the right) had also served in Corbyn's shadow cabinet. Starmer initially retained them in different roles, but in June he sacked Long-Bailey after accusations of anti-Semitism, after the latter reposted an article by Maxine Peake talking about a conspiracy theory about Israel, in relation to the recent murder of George Floyd. It's as bizarre as it sounds.[7]

Starmer gave himself a stupidly hard job becoming leader of the Labour Party, and it has been a very rocky road in the last several months. Said party he inherited has lost four elections in a row, contains deep enmity between the "soft left" and "hard left" wings of the party and is widely distrusted on the economy. Boris Johnson's Conservative Party has a majority of 80 seats in the House of Commons. When Starmer took over the party, the Conservatives were also leading the Labour Party by approximately 20% in the polls. Fast-forward a few months, Starmer has closed the gap considerably.[8]

During the first peak of the COVID-19 pandemic, and onto now, Starmer became notorious for roasting Boris Johnson into burnt turkey in every single PMQ during the pandemic, as he easily picked apart Johnson's frankly terrible response negligence. This probably didn't mean much for polling as not many people care about PMQs, but it certainly made some minor headlines given nothing else was happening (pandemic). Still, it's a good laugh seeing Johnson looking like a complete wally, as Starmer's previous work made it rather easy to take down any bollocks that BoJo stirred, making him look goofy and clueless. Which is, obviously, Johnson's actual character.

In his September 2020 Party Conference speech, Starmer distanced himself from Corbyn by saying the party "deserved" to lose the 2019 election, under the general pretext that Labour did not fully appeal to all voters,[note 2] and Labour is now under "new leadership".[9] Also in September, he expelled three MPs from his shadow cabinet after they defied the party whip by voting against a bill which would introduce a "presumption against prosecution", protecting British soldiers accused of comitting crimes while serving overseas, which critics described as "legalizing torture".[10] A weird reverse clock smash for Starmer, who at the same time opposes the death penalty to the very end.

While these events were not controversial at first, a flame war would begin when the party suspended Corbyn the following month, citing his unrepentance on the long standing Labour anti-Semitism controversy, after an investigation surfaced on the matter.[11] This was met with heavy backlash from the left-wing of the party which blamed Starmer for it, painting him as a figure similar to Neil Kinnock (the man who started pulling Labour to the center in the 80s, which the left in turn blames for recent failures, moreso than Blair oddly enough).[note 3] Corbyn was then reinstated, but Starmer refused to restore Corbyn's whip, and then promptly suspended a Jewish member of the party for defending Corbyn.

Oh, and around this period Diane Abbott decided to virtually border on harassing Starmer, attacking his mother.[12] Classic Abbott manoeuvre, but exceptional rudeness for her.

In 2021, Johnson and the Conservative government saw a boost in popularity - largely due to the UK's successful vaccination rollout.[13] In the May 2021 local elections (Starmer's first electoral test as leader) , Labour performed poorly across England, losing hundreds of council seats [note 4]. Labour also lost the Brexit-voting town of Hartlepool to the Conservatives in a parliamentary by-election[14] - the first time Labour has ever lost this seat. The only ray of light was in the Welsh Parliament, where Labour increased its vote share and seats against expectations. Starmer did a forbidden action for a politician correctly admitted that Labour has lost the voters trust and held the responsibility on his shoulders,[15] vowing to come back with an all-new manifesto for Labour.[16] At the very least, it is nice to see some admittance to the serious crisis Labour faces, ignited by factional in-fighting.

In September 2021, after over a year of ignoring Labour MP Rosie Duffield's transphobia, Starmer went mask-off and advocated excluding trans women from some "women-only spaces".[17]

Starmer's fortunes began to turn around in December 2021/January 2022. The 'Partygate' scandal did significant harm to Boris Johnson's personal approval rating, and the Conservative Party as a whole. As a result the 'vaccine bounce' poll lead for the Conservatives has been reversed, with Labour averaging a lead of between 5% - 10%.

Starmer himself was accused of breaking lockdown rules after video footage showed him and his staff eating curry and drinking beer whilst campaigning for an upcoming by-election, in what was creatively called 'Beergate'. Starmer was subsequently investigated by police and cleared of any wrongdoing. [18] In the same week, Boris Johnson announced he would be resigning as Prime Minister, meaning Starmer will be facing new Conservative leader Liz Truss in 2024.

Keir Starmer believes in renationalising the rail network and giving trade unions more power, as well as abolishing the universal credit benefits system both things he has now backed off from.[19] In August 2020, he supported the government re-opening of schools the following month in an editorial for the Daily Mail, in spite of the still-ongoing pandemic,[20] a mistake many other usually sensible people keep making for some reason.