John Enoch Powell (1912–1998) better known as "Enoch Powell" was a British politician, classical scholar, philologist and poet, who is perhaps best known for his xenophobic views on immigration (especially with regard to non-white immigrants) that bordered on caricature, and for travelling by pogo stick.[2] His attitudes were epitomised by a notorious speech he made, which later became known as the "Rivers of Blood"[3] speech. To the shame of many rock guitar fans, Eric Clapton has on a number of occasions spoken out in support of Powell's desire to curtail the immigration of melanin-enriched people into Great Britain.[4]

He pioneered Friedmanite free-market economics in the UK, opposed the peace process in Northern Ireland, and claimed the Jews killed Jesus. Also noted for his "mad eyes"[5] (to quote Harold MacMillan), distinctive diction, and being one of the few British politicians who is best known by his forename (though to be fair it's not exactly a common one). 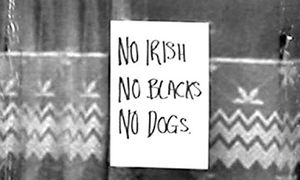 The banning of signs like these gave support for Powell.

Powell's "Rivers of Blood" speech was delivered "to a Conservative Association meeting in Birmingham"[6] on 20 April 1968. In essence, it was about "the threat to the native white British population of immigrants taking over their communities."[7] In it, he railed against immigration and the anti-discrimination Race Relations Act of 1968. The Act was significant at the time in that it advanced discrimination from public places to the workplace. One of the main focuses in public opinion was housing. At the time it wasn't uncommon for hotels to refuse tenancy to African or Irish migrants. To many, banning this practice was seen as a personal attack on a person's privacy. For businesses, it was feared that the Act would actually be discriminatory towards British workers and would favour migrants rather than equalise their chances of success. Powell's speech didn't actually contain the phrase "rivers of blood";[8] however, he did make a reference to Vergil's Aeneid, which features a "doom-laden prophecy"[9] about Rome's River Tiber "foaming with much blood"[10] (Powell had a passion for "Latin and Ancient Greek"[11] literature, which dated back to his days as a student at Cambridge University). Powell's speech also featured emotional anecdotes, making references to a landlady from Wolverhampton who was accused of racial prejudice after an incident where she refused to let two black men into her home to use her telephone. The woman was also reluctant to rent her rooms out to black people (the white lodgers had left once they discovered black people living on the street, which highlights just how prevalent xenophobia was at the time).

One of the best known sections, and the source of the speech's name, is as follows:

Of course, there is a certain irony in using a quote from a story about a group of refugees to criticize immigration (although this may have been an intentional and overly clever reference on Powell's part).[12]

Following the speech, there were numerous strikes supporting Powell, particularly by dockworkers, and polls showed that a significant majority of the population agreed with him; however, in Parliament cooler heads prevailed, and he was sacked from all party and parliamentary posts and relegated to the fringes of the Conservative Party by its leader, Ted Heath. Several years later, after endorsing the Labour Party at the general election of February 1974, he defected from the Conservative Party to the Ulster Unionist Party, before being re-elected to a different constituency at the second general election held in October that same year. His days as a powerful political figure were over at this point, although he remained as an Ulster Unionist MP until he retired from politics after being defeated in the general election of 1987.[13]

For a long time, the woman who was the main subject of the speech was considered to be fictional. It was later determined that she was a real person named Druscilla Cotterill, the wife of Harry Cotterill, who was killed in action during World War II.[14] Cotterill himself was the second cousin of Mark Cotterill, who was active in far-right politics.[15] Mrs. Cotterill lived at Brighton Place, Wolverhampton, which was dominated in the 1960s by immigrant families; not wishing to rent her spare room to West Indians, she stopped taking in lodgers after the Race Relations Act of 1968 was passed.[14] The local children in the community regarded her as a figure of fun and regularly taunted her.[14]

Although the woman in Powell's speech turned out to be real, another speech he gave on the same subject later that year contained numerous "falsehoods".[16]

Racists still whine about his relegation by the "PC police" to this day. Despite being shunned by his own party, in 1971, Heath (who was now prime minister) and the Conservative government passed the Immigration Act "to control and restrict this perceived large-scale immigration into the UK. In particular, the Act was enacted to prevent citizens from Commonwealth countries settling permanently in the UK. It took away any special rights Commonwealth citizens had once enjoyed, and the Act classed all alien immigrants as one."[17] The phrase "Enoch was Right" has been espoused by many far-right figures over the years, not least by "pound shop"[18] Powell imitator Nigel Farage.[19] This conveniently ignores some of Powell's more absurd predictions, such as his claim that "[i]n this country in 15 or 20 years' time the black man will have the whip hand over the white man",[6] or that there would be a literal "race war".[20] They also seem to be unaware that Powell's main targets were black or West Indian migrants; he "never mentioned Islam or Muslims in particular in his now infamous speech".[21]

Powell was not always opposed to immigration. In fact, as Minister of Health from 1960 to 1963, he encouraged Caribbean and Asian immigrants to work for the understaffed National Health Service; they were even paid bursaries![22]

He also spoke against British colonial mistreatment of the Kenyan Mau Mau.[23]

Powell was a man of very firm ideas that were often far from the mainstream, sometimes ahead of his time, sometimes behind, sometimes just odd. He was a passionate patriot and nationalist, who once claimed that he would fight and die for Britain even if it had a communist government. Powell even said he voted Labour at the 1945 general election, which Labour won by a landslide. He was also somewhat suspicious of the influence wielded by the United States, and generally disliked the country. He was a pioneer of free-market economics in the UK, even before Margaret Thatcher or Keith Joseph (he was the only MP to vote against the nationalisation of Rolls Royce's aerospace division in the early 1970s). In the 1980s, he argued against Britain keeping a nuclear deterrent because he felt it was useless for any conflict the UK would be likely to fight, and favoured a massive buildup of conventional weapons. He was also deeply involved with Ulster Unionism from the late-1960s, favouring making Northern Ireland an integral part of the UK rather than a province with its own parliament, although the more fundamentalist Loyalists like Ian Paisley hated Powell for being a high-church Anglican rather than a Presbyterian.

Surprisingly, Powell was one of only "a handful of Conservative MPs"[24] who voted to legalise homosexuality in England in 1967 (Thatcher was another). This was not because Powell, "a devoted Anglican and traditionalist, viewed the act as by any means morally acceptable, but because he did not believe that “it [was] a proper area for the criminal law to operate”."[25]

Powell was also a renowned Eurosceptic, and actually "urged Tories to vote Labour to keep Britain out of the EEC [European Economic Community]"[26] (which would eventually become what we now know as the European Union). In 1974, he "cast his vote for Labour, believing that Harold Wilson’s promise to renegotiate Britain’s terms of membership and offer a referendum made a vote for Labour the only viable option for opponents of the Common Market."[27]

In the 1990s, a young Nigel Farage (who has described Powell as his "political hero")[26] asked the old man to help him win a seat in parliament, and even to stand as a UKIP candidate for election to the European Parliament.[28] Powell refused both requests, although he apparently did endorse a few UKIP candidates shortly before his death.[29]

Powell had a thorough knowledge of ancient Greek, which he felt empowered him to write his own interpretation of the Bible, which he conveniently shaped to fit his political beliefs. One of his dissents from tradition were to argue that rather than being crucified by the Romans, Jesus was stoned to death by Jews. Whether this represents antisemitism or just the contradictions in the traditional crucifixion story is for you to decide. He also argued that Jesus didn't really mean to bless the poor, but was speaking metaphorically and meant gentiles. He based this on a rejection of the mainstream theory that the Gospel of Mark was the first written; he argued that the original was the Gospel of Matthew, which went through several revisions to become the version we have today.[30]