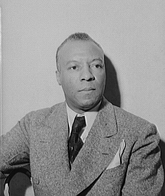 Asa Philip Randolph (1889–1979) was an American atheist and leader in the African-American Civil Rights Movement, the American labor movement, and socialist political parties.

He headed the March on Washington in 1963, where Reverend Martin Luther King, Jr. delivered his famous "I Have a Dream" speech.

Randolph was born in Florida, but moved to New York City in 1911, where he was first introduced to socialist ideals. He met economist Chandler Owen, student of Columbia University Law, and they developed mixed economic and social views. In 1917, Randolph and Owen founded The Messenger magazine in New York City with the help of the Socialist Party.[1]

Randolph ran on the Socialist Party ticket for New York State Comptroller in 1920, and for Secretary of State of New York in 1922. Both times he was unsuccessful.

In 1947, Randolph, along with colleague Grant Reynolds, formed the Committee Against Jim Crow in Military Service, later renamed the League for Non-Violent Civil Disobedience.

In 1950, Randolph founded the Leadership Conference on Civil Rights (LCCR), along with Roy Wilkins, Executive Secretary of the NAACP, and Arnold Aronson, a leader of the National Jewish Community Relations Advisory Council. LCCR has since become the nation's premier civil rights coalition, and has coordinated the national legislative campaign on behalf of every major civil rights law since 1957.

In 1963, Randolph was the head of the March on Washington, leading thousands of Americans to the steps of the Lincoln Memorial, at which Reverend Martin Luther King, Jr. delivered his famous "I Have a Dream" speech.

In 1917, Randolph organized a labor union of elevator operators in New York City.

Randolph formed the first predominantly African American labor union, the Brotherhood of Sleeping Car Porters (BSCP), which he served as president and led a 10-year drive.

Randolph also served as vice president of the AFL-CIO in 1955.[2]

While raised by his father, Rev. James William Randolph, Randolph's religious views evolved over time until Randolph identified himself as an atheist.[3] In 1973, he signed the Humanist Manifesto II.[4]

In the November 1917 issue of the The Messenger magazine (which Randolph founded), Randolph expressed the following atheistic values:[5]