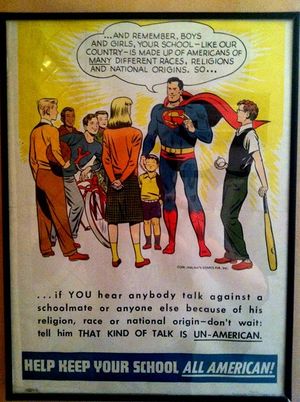 Patriotism is a love and/or devotion to one's own country or to one's nation.[3] As a form of collectivism at a national level, it shares close similarities to nationalism and may contrast with cosmopolitanism[4] or with internationalism.[5] A patriot, therefore, is someone who supports their country; sometimes unquestioningly, possibly ignoring their country's faults while doing so. As you can pick a fault or two with pretty much any country, those who describe themselves as patriots usually use emotion rather than logic when defending their positions. According to Samuel Johnson, "Patriotism is the last refuge of a scoundrel."

Annoyingly, on the Internet, patriotic fervor frequently results in pointless arguments between people of different citizenships/nationalities. Common themes involved are about whose country is better, would win in a war, invented more stuff, etc. With the latter it is a convenient way of giving one a feeling of pride despite not actually doing anything.

A more sinister form of patriotism can become jingoism, a warlike nationalism.

It can be argued that true patriotism means concentrating on the faults of your country in order to improve them. Someone who truly loves their country will not turn a blind eye to the actions of the national government. As was the case with the ironically-named PATRIOT Act, the word "patriot" can often be applied in contexts that are the antithesis of love and respect for national traditions: in a country ostensibly founded on revolution against tyranny, a true patriot might well be someone who would speak up against the actions of the government. If one is a patriot of a democratic country, then that person will not condone their country doing such things as launching coups in other democratic nations, invading other countries on trumped-up charges, or ignoring problems such as global warming and world hunger.

A patriot is likely to define anyone who disagrees with them on any point of their definition of patriotism as a traitor who wants to sell the country to the highest (lowest?) bidder.

While some tend to conflate patriotism with nationalism as if they mean the same thing, George Orwell offered one particular difference patriots have from nationalists: a "devotion to a particular place and a particular way of life, which one believes to be the best in the world but has no wish to force upon other people".[6]

American patriots are notable due to the yellow magnets on their SUVs,[7] and their support of whoever seems to be the most anti-terrorist. Also, they believe, reflecting Michael Savage's motto "borders, language, [and] culture," are important to preserve a nation.