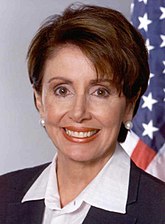 Nancy Pelosi (1940–) is the current Speaker of the United States House of Representatives, elected on January 3, 2019. She previously served as Speaker of the House from January 2007 to January 2011, and then as the House Minority Leader from January 2011 to January 2019. She is one of the most prominent members of a long list of liberal boogey(wo)men. She is a Catholic Democrat from San Francisco, representing the district that encompasses the city, and you know what that means.

She self-describes as a "liberal Democrat" and has a generally left-leaning voting record. The ever-trustworthy National Journal has given her liberal scores of 86, 90, 92.3, and 83 for the 108th, 109th, 110th, and 111th Congresses respectively.[1] She has been specifically singled out by the principled conservative opposition for her spreading of San Francisco Values. While she does have a highly favorable rating from the Human Rights Campaign (along with 176 other politicians[2]), she has no significant record of pursuing social causes of any kind, let alone gay issues.

Like virtually all politicians, she has a history of partisan pontificating. In 2008, at the conclusion of the hearings for the original bailout bill, she gave a speech one could expect (but wouldn't necessarily get) from a Democrat on the need for accountability from the banskters and financial elites -- Republicans used Pelosi's common-sense words as an excuse to go forward with the bail-out, a rescue of their pals they were going to do no matter what.[3] But then again, Democrats, including Pelosi, were pretty much all talk and also never intended to do much, if anything, to rein in Wall Street.[4]

However, much like Chuck Schumer, her stance on Israel is not exactly a good one. She has clashed with then-newly elected Congresswoman Ilhan Omar over Omar's stance being for Boycott, Divestment and Sanctions

In 2013 an image of a "Miss Lube Rack of 1959" supposedly resembling Pelosi was spread around the Internet in "a bit of political tomfoolery,"[6] despite the fact that Pelosi would have been 11 at the time, as the photo was actually taken in 1951. It makes you wonder why wingnuts were so... adamant to find a picture of her in her twenties.

This politicians-related article is a stub.
You can help RationalWiki by expanding it.
Retrieved from "https://rationalwiki.org/w/index.php?title=Nancy_Pelosi&oldid=2447471"
Categories:
Hidden categories: