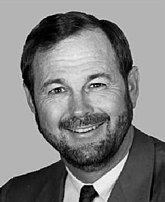 Dana Rohrabacher (1947–) was a long-term California Republican Congressional Representative who finally lost an election in 2018. He is a long-haired hippie who dresses in black jeans and turtlenecks to symbolize anarchy, burns draft cards at YAF conventions, travels around the U.S. west coast singing radical folk songs about laissez-faire and smashing the state, lives in an anarcho-village of science fiction fans and underground economy advocates, doesn't vote, and spreads the anarcho-pacifist gospel of Bob Lefevre.

Or so we still wish. What a sellout.

Obviously, an old libertarian like that would never run for Congress as a Republican, formulate the Reagan Doctrine, play second fiddle only to Tom Tancredo as an anti-illegal immigration hardliner, or campaign against gay marriage.

However, he is not a doctrinaire Republican. He supports medical marijuana and voting rights for DC (though with a bizarre plan to make them part of Maryland).

He's also been connected to Jack Abramoff and was one of the few Congresspeople to publicly defend him.

Rohrabacher has made some astute observations on climate science:

Rohrabacher claimed to have been in the Ambassador Hotel on June 5, 1968, at the time that Robert F. Kennedy was assassinated by Sirhan Sirhan.[6] Rohrabacher is a believer in the conspiracy theory that others were involved in the assassination, and he went so far as to visit Sirhan in prison while dressed as a woman and badgered him about the assassination.[6]

Rohrabacher has actually suggested that the United States should support ISIS when they attack other terrorist groups after they attacked the shrine of Ayatollah Khomeini (of Iran, which supports Lebanese terrorists Hezbollah).

In 2018, American warlord Erik Prince, co-owner of Blackwater, announced that he would host a fundraiser for his longtime friend Rohrabacher.[8] At the time, Prince had been under investigation by the FBI over whether he tried to establish an illegal backchannel of communication between Russia and the Trump transition team.[9] As a member of the House Foreign Affairs Committee, Rohrabacher was an unusually robust supporter of Russia and Wikileaks.[8] Rohrabacher has also been tied to Robert Mueller's FBI investigation when Rick Gates admitted to lying about a meeting between Rohrabacher, Paul Manafort and a lobbyist on Ukraine.[10] In 2016, House Majority Leader Kevin McCarthy "told other Republicans that he thought Rohrabacher and President Trump were on the Russian payroll."[10]