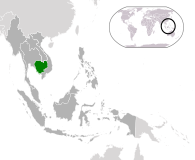 Cambodia is a country in Southeast Asia, notable mostly for being the home of some spectacular ruins (Angkor Wat) and some bloodthirsty assholes (Pol Pot and the Khmer Rouge) who killed an estimated 1.5–2.25 million people in less than five years (roughly 17-25% of the population).[1]

The Khmer Empire was the dominant power in the region until its fall in the 15th century. Cambodia was then colonized by the French in the 19th century, and was granted independence in 1954. There followed a gradual decline until the 1970s, when Lon Nol's right-wing, Western-backed junta disposed of King Norodom Sihanouk. This unpleasant episode was followed by the Khmer Rouge regime of mass murder which likely killed between one in six and one in four Cambodians. Finally Vietnam invaded and drove Pol Pot and his forces out of the capital and into the jungle. Gradually the Vietnamese left the country and order was restored, and in 1993, a democratic general election was held for the first time in decades. Following this, most of the Khmer Rouge leadership (with the notable exception of Pol Pot) were tried by an international tribunal which dragged on for more than a decade, eventually failing to convict all but one of the defendants.[2]

The current Prime Minister of Cambodia is Hun Sen, who has held the position since 1998. He was a former Khmer Rouge cadre who defected to the Vietnamese, and rose to power under the Vietnamese installed government. He refused to relinquish power after losing the 1993 election, resulting in a joint prime ministership with Norodom Ranariddh, the person who actually won the election. Hun Sen is also known for his authoritarian antics, and in a bid to consolidate his personal power, created a personal "praetorian guard" to prevent the military from overthrowing him.[3] And that's not mention his attempt to sell 45% of the country to foreign investors and forcibly evict thousands, as well as his party's total domination of the country's media.

Complicity in the killing fields[edit]

Multiple states, decision-makers and ideologies were complicit in the genocide.[4]

First, the example of ethnic cleansing and genocide was provided by the rightist Lon Nol military regime which was placed in power by the United States and Thailand. It expelled some 320,000 of the 400,000 ethnic Vietnamese living in Cambodia and conducted massacres of tens of thousands of others, all before the Khmer Rouge took power.

Second, the Khmer Rouge were initially armed by North Vietnam, whose leaders and government professed an orthodox Soviet style Marxism-Leninism. They sought to influence events in Cambodia for the same geopolitical reasons that they supported an orthodox Marxist-Leninist insurgency in Laos. The North Vietnamese ultimately redeemed themselves somewhat by putting an end to the Khmer Rouge regime in 1979, although this was less over humanitarian concerns than it was an attempt to install an obedient client state in the region. You see, Vietnam was allied with the USSR, while Pol Pot's Kampuchea was allied with China, and since the Sino-Soviet split the two main camps of the communist world had been involved in their own cold war.

Third, the United States conducted massive aerial bombardment of western Cambodia during the Vietnam War, where North Vietnam's supply line, the Ho Chi Minh trail, was located, killing many Cambodian peasants and driving the angry survivors into the waiting arms of the Khmer Rouge. For 1973 alone, 257,465 tons of explosives were dropped. That is approximately one-half the amount dropped on Japan by the U.S. during its entire aerial bombardment in the entire Second World War. In effect, the United States created the essential pool of political supporters and military recruits without whom the Khmer Rouge could not have committed genocide on such a large scale. More recent analyses have argued, though, that this point is somewhat overstated and that the bombings probably staved off the Khmer Rouge advance for some time.

Fourth, the Khmer Rouge leaders were motivated by a mixture of Khmer nationalism (a strong dislike to hatred of the Vietnamese and Thai/Siamese goes back over a thousand years, but this brand was largely a French colonial construct), agrarian socialism, and Marxism-Leninism-Maoism Thought, itself the vehicle for Chinese nationalism. Khmer Rouge propaganda harked back to the glory days of the Khmer Empire, the supposed racial purity of the Khmer race, and a desire to abolish urban industries and replace them with a purely agrarian society.

Fifth, as part of its schism with the Vietnamese communists, the People's Republic of China supported the Khmer Rouge with arms and economic aid after they took power in 1976. Even following the Vietnamese invasion in 1979, the Khmer Rouge entered a coalition with Cambodian royalists as party of the Coalition Government of Democratic Kampuchea (CGDP) alliance, which was recognized as the legitimate government of Cambodia by most countries.

So the list of states, leaders and ideas that may be blamed for the Cambodian Genocide is long.

Since the adoption of Human Rights Council resolution 30/23 [5] on 2 October 2015, the Cambodian Government has taken steps to further restrict the rights to freedom of expression, peaceful assembly and association, limit the political opposition’s ability to meaningfully engage in policy-­making and campai­gning, and prevent civil society organizations from operating freely and independently. Legislation that unduly restricts human rights and fundamental freedoms continues to be in force, including the Law on Association and NGOs (LANGO), which the Office of the UN High Commissioner for Human Rights (OHCHR) has described as falling “significantly short of international human rights laws and norms” and as “threatening the existence of a free and independent civil society in Cambodia,” [6] with increasing concerns that the government is prepared to use it to arbitrarily de­register civil society organizations it labels as violating the concept of “political neutrality.” A Trade Union Law imposing new restrictions on the right to freedom of association has also come into force, marking a further downward slide for labor rights in the country. [7] Security forces continue to suppress peaceful protests, and in recent months, instances of judicial harassment and unwarranted legal attacks against human rights defenders, community activists, trade union­ists and political opposition members and their supporters have multiplied, with no end in sight.

On November 21, 2016, the WGAD ruled that the ongoing detention of Mr. Ny Chakrya, Deputy Secretary-General of the National Election Committee (NEC), and four staff members of the Cambodian Human Rights and Development Association (ADHOC), Messrs. Ny Sokha , Yi Soksan, Nay Vanda, and Ms. Lim Mony, was “arbitrary.” [8] They highlighted the case of the Cambodian Human Rights and Development Association (ADHOC), one of Cambodia’s oldest, largest, and most­ respected human rights NGOs, whose four senior staff members have been targeted along with a former staff member, now Deputy Secretary-­General of the National Election Committee (NEC). They have been subjected to a judicial investigation and arbitrary detention on charges that have all the hall­ marks of being politically-­motivated of “bribing a witness” in connection with the provision of advice and legitimate reimbursement of food and transportation costs to a woman alleged to have had an extra­marital relationship with the deputy opposition leader, Kem Sokha. The continued detention of the five defenders, as well as the threats and intimidation of those who have spoken out in their defense, including through a campaign on social media, has led to an increasingly repressive environment for freedom of expression and sent a chilling message to the critics of the government.

On 12 May 2016, four UN Special Rapporteurs jointly called on the Government of Cambodia to “stop targeting civil society, human rights defenders, parliamentarians and UN personnel and to take effective measures to protect civil society and respect fundamental freedoms in the country.” Following a submission made by the Observatory for the Protection of Human Rights Defenders (OMCT-FIDH partnership), the Cambodian Center for Human Rights (CCHR) and the Cambodian League for the Promotion and Defense of Human Rights (LICADHO) in June 2016, the WGAD’s Opinion No. 45/2016 ruled that the five human rights defenders (HRDs) “have been discriminated against based on their status as human rights defenders, and in violation of their right to equality before the law and equal protection of the law under article 26 of the ICCPR.” This is the first time ever that the WGAD - or any other UN mechanism receiving individual complaints - has referred to HRDs as a protected group that is entitled to equal legal protection under Article 26 of the International Covenant on Civil and Political Rights (ICCPR). The ruling also recognised the violation of the five HRDs’ “rights to offer and provide professionally qualified legal assistance and other relevant advice and assistance in defending human rights.” [9] [10]

One of Cambodia's regional delicacies is deep-fried spiders. They use a species of tarantula that has long been known as the "edible spider

". —Oh, if you have a deep-seated, visceral fear of spiders, you probably shouldn't have read that.

As evidence that humans and dinosaurs existed simultaneously, and that therefore the earth could be young, creationists present a carving found among the ruins near Siem Reap in Cambodia that they claim is of a stegosaurus, and the kids there call it their approximation of a dinosaur, dee no soo. Answers in Genesis has concluded, "That means that only a little over 800 years ago, some dinosaurs were likely still living in the region of Cambodia!" They also assert that "we know from Genesis 1 that land animals (such as dinosaurs) and humans were living together in the beginning, and that representatives of the land animals (e.g., dinosaurs) were saved on the Ark to repopulate the earth after the Flood only 4,300 years ago."[14] The drawing, of course, depicts something else entirely: among other things, the "stegosaurus" is shown as having long ears. In reality, it is either a drawing of a modern animal such as a rhinoceros, or a modern hoax.[15]