Orientalism is the concept that the Orient (Asia, including the Middle East) is inherently different from the so-called Western world or Occident, and moreover inferior to it. It can also mean a somewhat related sort of art or literature. In the first sense, it is a sort of racism that makes use of assumptions, exaggerations, and fabrications in order to portray non-Western cultures as uncivilized (but "raw" and "pure" from contemporary society), mysterious, and dangerous. In the second, it is art or literature that espouses such tendencies. Both are tied to politically expedient justifications formerly given for colonizing the non-European world.

The roots of orientalism probably date back to the classical antiquity. Even as far back as the fifth century BCE, Herodotus based much of his famous work on the idea that east and west were in some sort of eternal conflict. Strange ideas about foreign lands can be found in Pliny the Elder's Natural History, which includes a wide variety of rumour, speculation, and probably sheer fiction about the unknown parts of the world — which for the Roman Pliny principally meant Africa and Asia beyond the Roman provinces, although he also included some tales about the distant barbarian north.

In the Medieval period there was general ignorance about what lay to the south or east of Europe: the various Islamic caliphates, the Ottoman Empire, and the Mongols all put a brake on western travel, while exotic myths proliferated, such as that of the paradise ruled over by Prester John.

From the late 18th century, there was widespread interest from western Europe in the exotic lands of the Middle East, with a general supposition that such lands were full of slave girls and ruthless tyrants cutting the heads off said slave girls. There was little attempt to distinguish between the varieties of pre-Arab, Arab, and the Persian cultures, or even those further East. This was popularised by the One Thousand and One Nights,

a collection of folk tales, which attracted in the West a wide variety of bowdlerised or sensationalised translations and several imitations or fakes. The British decadent William Beckford

set his elaborate fantasies of sex and destruction in a highly fictionalised version of the Middle East in his novel Vathek (1786). 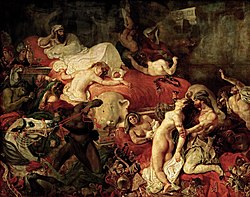 The Death of Sardanapalus, 1827 oil painting by Eugêne Delacroix.

Through the 19th century, at the height of the Romanticism art movement, paintings of harem scenes and the imagined courtly life of Middle Eastern monarchs were very popular, such as by Jean-Auguste-Dominique Ingres and Eugène Delacroix. The latter's The Death of Sardanapalus

displays the Assyrian monarch's demise surrounded by naked women. Other portrayals of the "Orient" or Middle East as associated with sex and death can be found in Flaubert's Salammbo

These indicate a lack of concern with historical specificity that could run from the Old Kingdom of Egypt via Flaubert's Carthage to the contemporary Ottoman Empire with essentially the same stereotypes. But historical accuracy was never a priority in Romantic styled paintings compared to nostalgia, emotion, and the idea that the Orient was closer to medieval times.

The interrelation between scholarship, war, and popular literature can be seen in Jean-Joseph Marcel,

who accompanied Napoleon on his military operations to Egypt in 1798. At the same time, Marcel picked up the Rosetta Stone and made it an object of study by western philologists, and wrote fake Arabian folk tales which he pretended were translated from the Arabic of al-Shaykh Muhammad al-Mahdi.

Interest in Chinese and Japanese art and culture flourished through the 19th century. Chinese porcelain was enormously popular from the 17th century, and often manufactured by cynical Chinese companies with an eye for the western market, whether including a mish-mash of Oriental imagery or western subjects such as German folk scenes or commissions with coats of arms for European nobles.[1] Japanese visual arts were highly acclaimed and fashionable in Europe from the late 19th century, and greatly influenced Post-impressionist art and Art Nouveau. Although this appears fairly benign, at the same time, the American navy was opening up Japanese ports to Western imports, and European armies intervened in Chinese politics such as in the Opium Wars and Boxer rebellion.

This racism-related article is a stub.
You can help RationalWiki by expanding it.
Retrieved from "https://rationalwiki.org/w/index.php?title=Orientalism&oldid=2410839"
Categories:
Hidden category: