Assim al-Hakeem (23 November 1962–) is an Islamic scholar living in Jeddah, Saudi Arabia and a prodigious propagator of Islamic material in English on the Internet.[1]

He obtained his B.A in linguistics from King Abdul-Aziz University in Jeddah in 1987, and later on he had a High diploma in Islamic studies from Umm Al Qura University in Makkah in 1998 as part of his Da'wah activities. Sheikh Assim started his Work Experience in 1988 by working as an English teacher in High school, and then changed his career to take different positions in the field of Human Resources & Public Relations. He is working now as HR & PR Director at one of the leading companies in Saudi Arabia in the fields of rock cutting, earth moving and mining.

He advocates the execution of ex-Muslims, comparing apostasy to grand treason.[2] In an Islamic state, he says, Christians and Jews should be forced to pay a special tax[3] and killed if they criticise Muhammed.[4] What's more, Muslims should be careful not to get too friendly with followers of these religions.[5]

Unsurprisingly, he is also homophobic:

Homosexuality is an illness and something that Allah despises. The Prophet salla Allahu alaihi wa sallam

has cursed those who have intercourse with their wives through the anus. The punishment and the consequences of having it with another man is even greater.

You have to fight these feelings as you don’t have any excuse for not doing so. It is something that is not natural. Trying to legitimize it by saying that you were abused when you were a child doesn’t change a thing.[6] 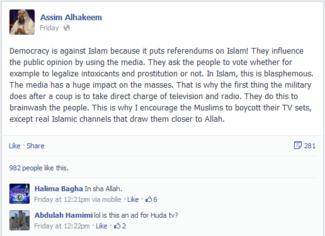 Al-Hakeem has some rather dubious views on conduct during warfare. For one, he supports the usage of torture to extract information.[7] He also believes that it is acceptable to take prisoners of war as slaves: "In Islam, we don’t have personas of war who are put in concentration camps. We have slavery which is a humane way of treating these prisoners", he says. According to him, female slaves can be used for sex: "As for the female slave, Islam secured her freedom if she bore a child from her master. Once she does that, she can’t be sold or given away as her child frees her. She remains a concubine until her master dies and then automatically she is freed."[8]

Al-Hakeem is certainly not a feminist. He argues that women shouldn't be allowed to become political leaders,[9] don't have the right to reject their husbands' advances;[10] he also supports female genital mutilation.[11]

He has suggested that 9/11 was a false flag operation.[12] Other subjects he has commented on include methods for curing jinn possession and the evil eye,[13] and his belief that people who don't prevent urine from splashing back on themselves while going to the toilet will be punished in the afterlife.[14]

In June 2013, Al-Hakeem was invited to deliver a Friday sermon at the East London Mosque. The following Monday, the mosque held a "no place for hate" meeting denouncing bigotry.[15]