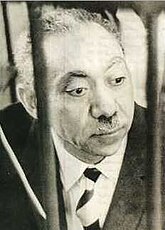 Sayyid Qutb (pron. koo-tuhb; 1906-1966) was an Egyptian poet, educator and writer and revivalist of the concept of a Sunni Islamic state governed by Shariah law. He was from a remote village in central Egypt and was educated in schools based upon the Western model. He chose a career in education and got a job in Egypt's Ministry of Education.

Qutb went through a period of "wastage" and apostasy for 15 years studying the works of Karl Marx[2] and others. Qutb "gulped down" Western ideals such as individualism and independent thinking, abandoning the guidance of traditional Islamic scholarship.[3] After a two-year stint in the United States to study its educational system Qutb converted to radical Islam. Upon his return to Egypt he published several radical texts including the seminal Islamist tract, Milestones on the Road[4].

with jihadism to overthrow regimes installed by Western imperialists.[5] He was arrested and charged with plotting a Marxist coup, a charge which media and public opinion deemed entirely plausible, but today appears ludicrous.[6] It was in fact Nassar's Soviet allies, and not the NATO Western powers, who urged Nassar to deal harshly with resistance movements.

Ayman al-Zawahiri, the founder of the Al-Qaeda movement of Osama bin Laden fame, was a protege of Qutb.

Sayyid was hanged in Egypt in 1966, which only strengthened the radical Islamists he was leading. His death is seen by extremists as the first Shahid (or martyr) in the global jihad and his writings (mostly from jail) are now the central texts (guides) outside the Qur'an in Islamism. "A Child From the Village" is a great read on the early life and times of Sayyid, while also covering his conversion to extremism.

He is the author of a 15 volume Commentary on the Qur'an often quoted by Salafis, In the Shade of the Qur'an.[7]

A staunch anti-Semite, Qutb published a book titled Our Struggle against the Jews.[8]

Following the brief presidency (2012-2013) of Mohammed Morsi of the Muslim Brotherhood in Egypt and their relationship with Hamas, it was actually worthwhile to understand what Qutb was in the pantheon of Islamic thought. Sam Harris insists that Islam is inherently violent, but the reality is that Qutb informs more modern Muslim radical ethos than the Prophet. His idea is that Arabs will unite and collapse the despot regimes that embraced secular ethos of the revisionist Baath Party or Nasser-ism. Nobody remembers that Qutb was killed for opposing the Nasser regime, not because he was a Muslim, and understanding this power-relationship is important in understanding the new relationship the West will have with Egypt (For those of you who weren't keeping track, Egyptian relations with Israel are pretty important). Qutb was nice enough to leave behind a concise yet phantasmagorical vision of the future where everyone mass-converts (kinda like Moonies), titled Ma'alim fi al-Tariq' ("Signposts" or "Millstones on the Road") that is just utopian enough to allow any alleged Qutbist party to bring about either a certain kind of economic re-construction not seen since the end of the Roman Empire in regards to the Middle East and the Arabic Peninsula, or, on the contrast, wreak all sorts of fucking untold misery, stupidity, despotism, and paranoia.

Quintan Wiktorowitcz claims modern Salafists "focus on several Qur’anic verses related to God’s right to rule, including Qur’an 5:44,86 and build on Sayyid Qutb’s understanding of tawhid hakamiyya (the right of God alone to rule). Terms related to hakamiyya in the Qur’an are used to mean wisdom, judgment, and reconciliation, rather than authority, but Qutb expanded their meaning to incorporate governance and rule."[9] These ideas have been used to condemn democratic elections, parliamentary democracy, and Islamic rulers who embrace such or make peace accords with Infidel powers.