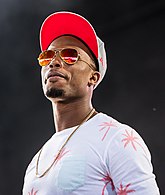 He is mostly known for his 2016 Twitter brainfart wherein he endorsed the flat Earth hypothesis.

In January 2016, B.o.B decided to share his insights that the Earth is flat based on extremely old and unscientific arguments. Astrophysicist Neil deGrasse Tyson responded to B.o.B's statements, countering them with science.[1] B.o.B did to Tyson what rappers usually do to other rappers, and he released a diss track

aimed at Tyson called "Flatline" (though what the "n" is doing in the name is an open question, since he never pronounces it). The song further expresses B.o.B's bogus opinions, and is sprinkled here and there with some other conspiracies, mostly those revolving around NASA:

However, Neil deGrasse Tyson's nephew Stephen is also a rapper, and the two collaborated together to release a song aimed back at B.o.B, titled "Flat to Fact",[2] in which Tyson hilariously stated at the end, "To be clear, being five centuries regressed in your reasoning, doesn't mean we all still can't like your music."

Tyson then appeared on The Nightly Show on Comedy Central, where he stated, "It's a fundamental fact of calculus and non-Euclidean geometry. Small sections of large curved surfaces will always look flat to little creatures that crawl upon it... And by the way, this is called gravity [literally drops the microphone]."[3]

One would think that, as a wealthy entertainer, B.o.B could afford to simply charter a flight to the edge of the Earth in order to prove his doubters wrong.

The first image showing the Earth's curvature, from 1933

On September 21, 2017, B.o.B. launched a GoFundMe campaign to try to raise US $1 million to purchase and launch 1 or more satellites to "research" the curvature of the Earth.[4][5] Unlike Kickstarter and Indiegogo, GoFundMe is exceedingly lax with regard to the ability of people to scam donors; GoFundMe doesn't actually require recipients to do anything with money received.[5] Nonetheless, on September 26, 2017, GoFundMe felt compelled to temporarily suspend B.o.B.'s campaign even though it did not violate the terms of service.[5] Subsequently, the goal of the campaign mysteriously changed to "purchase and launch multiple weather balloons and satellites into space, for experimental exploration."[6] The experiment can be and has been conducted nowadays for just a few hundred dollars: buy a weather balloon, a helium cannister, and a GoPro camera with the fisheye lens effect removed.[5] The earliest photographic proof of the curvature of the Earth from a balloon was in 1933.[7] B.o.B. is still fishing for $1 million though.

See the main article on this topic: Crank magnetism

If the flat Earth thing wasn't enough, B.o.B is also a Holocaust denier, urging his own fans to "do their research" on David Irving.[8][9] In his song "Flatline", he declares that science is a cult. Adding to this soup of delusion, he believes that celebrities are being cloned pretty much every damn second.[10] And to make things even crazier, he believes reptilians control the universe.