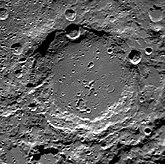 The Zeeman crater is the supposed location of all kinds of alien stuff on the Moon. According to Richard C. Hoagland.

In 1994, the DOD and NASA's Clementine probe (a.k.a. Deep Space Program Science Experiment) was sent around the far side of the Moon before hurtling off into deep space. The probe's name is reportedly a reference to the lyric "lost and gone forever" in the American folk ballad "Oh My Darling, Clementine."

While cruising the back side of the Moon, Clementine beamed a series of topographic photos back to Earth. According to conspiracy buffs they show "anomalies" that can only be evidence of a former extraterrestrial civilization:

As you may have guessed, that irrepressible interpreter of visual blobs Richard C. Hoagland is behind the majority of this crackpot nonsense.[1]

Since it's located on the far side of the Moon and not directly visible from the Earth, nobody except a small circle of government insiders knows about it and intend on keeping it hidden from the public. But luckily, a brave anonymous whistleblower has revealed this awesome secret. Rather than spell it out in plain English, they have hidden clues to the conspiracy in the Clementine mission's official logo patch! Yes indeed, stare closely at the patch and you will see, among other things, a poorly-drawn US flag, which everyone knows is the symbol for a false flag operation.[2]