Do your own research 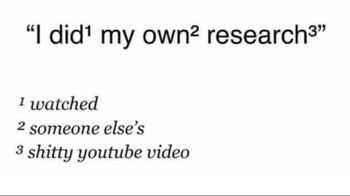 "Do your own research!" is a common phrase used by conspiracy theorists and pseudoscience promoters of various creeds in response to people who are skeptical of their claims. This phrase is a form of the escape hatch (Argumentum ad googlam) used by a charlatan who wants to win the argument but does not want to bear the burden of proof. Typically by this, they tend not to be suggesting you actually read through papers in peer-reviewed scientific journals—nah, they're evil, big government shills—nor are they suggesting you conduct original research; Professor Google provides all the info needed. Some specify YouTube is the key to all your "research" (Argumentum ad YouTube).

If you must have recourse to some actual books (how elitist!), stick with the likes of Kevin Trudeau and Alex Jones. Many "research" websites are merely copied from each other, making finding true "original" sources very difficult. Ultimately, the "argument" boils down to "do your own research, from my list of self-approved sources."

Ironically, conducting actual, thorough research from vetted and reliable sources is the best way to debunk conspiracy theories; this goes largely unnoticed by their advocates. It's commonly used when evidence is debunked too, as some people aren't mature enough to admit that they're wrong.[2]

Use in civil rights movements[edit]

Some activists in the modern social justice movement do ask or advise people to educate themselves (often in the form of saying "It isn't my job to educate you.")[3] — but for a very different and more legitimate reason. In this case, it is used as a reminder that a member of a marginalized group is under no obligation to educate someone about social justice issues if they choose not to (barring cases of paid or volunteer activists, for whom this literally is their job.) There are very good reasons why someone might say this: for example, detailing the effects of marginalization may involve the telling of very personal or painful memories or experiences that one may be uncomfortable expressing to a complete stranger, let alone a group of strangers.[3] This can be further complicated by the way in which the internet allows for massive bombardments, including the times when social media postings go viral: someone who might have time and willingness to discuss questions from a few close people may not have the physical or mental energy, free time, or patience to deliver personal tuition to every single one of the hundred and fifty people suddenly interrogating them in their Twitter mentions.

That being said, there may be times when asking someone to educate themselves is not an ideal response to questioning, with systemic and psychological phenomena such as Pariser's Filter Bubble

and confirmation bias potentially interfering with the quality of self-research. In addition, someone who has allegedly said something politically incorrect but is repeatedly told "it's not my job to educate you" by critics when he or she asks what exactly they are supposed to have done wrong and how they could have expressed themselves in a better way is not going to develop a positive impression of the social justice movement. Although nobody owes an explanation to this person, it may be in the best interests of all concerned to give them one.

Of course, this all assumes that the asker is asking in good faith, rather than not.