Pastor Ernest a.k.a. Brother Ernest (Ernest Perce) is the living embodiment of everything wrong with Christian Fundamentalism. He supports a flat earth, a literal Bible, 9/11 conspiracy theories, and is an antisemitic sovereign citizen who believes in a global Jewish conspiracy.[2] His webshites reek of green ink. He is known for initiating spurious legal actions, including harassing a teacher in his local school district for wearing a Star of David necklace.[3] He may be a Poe.

In 2012 Perce was the Pennsylvania state director of the American Atheists and Nonbelievers, and as such, was involved in the acquisition of an inflammatory billboard that presented the image of a shackled slave along with an accompanying Bible verse.[4] Perce was also known as the "Zombie Mohammed"[5] whose legal case further demonstrated his bizarre incoherence and ignorance.[6]

Perce "proves" a flat Earth by showing that both the moon and sun are visible at the same time, a total impossibility for a spherical Earth.[8] He cites Isaiah 66:1, which reads "Thus saith the LORD, The heaven is my throne, and the earth is my footstool", and notes that "Flootstools are flat, not round!"[1] He says, "[the] Sun is not 96 million miles away, it's actually within our atmosphere, and even under the clouds". Perce even argues that Google admits that "the earth [sic] is covered by a dome"[9] because of their Snow Globe Google Doodle.[10]

Perce used the flat Earth as proof that God exists.[11] However, in 2019 it appears that Perce disavowed his flat earth beliefs and is now promoting a "concave earth" conspiracy theory.[12]

Perce thinks the moon landings were fake and involved aliens.

Perce tells us that the Jews and/or Israel did 9/11 and he has irrefutably debunked what he calls the "Official 9/11 Jewry Report." Ad nauseam.[14][13] 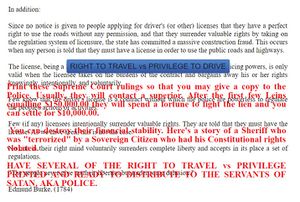 Pastor Ernest's support documentation for claiming he is a sovereign citizen comes up a little...confusing.

Perce also subscribes to typical sovereign citizen nonsense. He proves his point by crudely photoshopping a picture of the United States Supreme Court justices with Jewish stars in an infantile manner. He believes that one can sue police for harassment, stalking, terrorizing and violating the constitution upon any contact. He includes guidance on how to use freeman on the land gibberish when pulled over for a traffic stop.[15]

Perce savagely attacks homosexuals and justifies homophobia based on a twisted interpretation of the Bible. He believes that Caitlyn Jenner

are one and the same, and links this to an international Jewish conspiracy complete with a crude caricature of an Evil Jew.[16] He is also a Holocaust denier, using a whole bunch of green ink copypasted from internet hate sites as proof.[17][18]