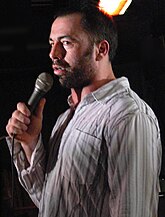 Joseph James Rogan (1967–), known professionally as Joe Rogan, is an American comedian, podcaster, martial artist, and actor. He is best known for hosting Fear Factor, being a commentator for the UFC, and his podcast, The Joe Rogan Experience (JRE).[1] The JRE is one of the most listened to podcasts in the world and features conversations with a wide variety of well known people. There is no set theme for topics discussed, nor an archetype for guests. The people that have appeared on his show range from weed smoking CEOs, through left-wing politicians, to famous atheists and the occasional madman.[2] Though he has been described as 'libertarian-leaning' by CNN,[3] with the exception of Bernie Sanders,[note 1] he has only supported libertarian candidates for president (Ron Paul, Gary Johnson, and Jo Jorgensen.

He is somewhat known for his fringe views, which include New Age ideas. Raised Catholic, his spiritual views are now derived from experiences he's had using psychedelic drugs.[4][5] He has promoted numerous conspiracy theories, and is notable in part because of that.[6] One of his more prominent traits is his willingness to repeat anything he heard anyone say in the last five minutes and then adopt those beliefs for a time, often without any consideration of the validity of said beliefs. Rogan is also a personal friend of Alex Jones[7] and has been featured several times on InfoWars together with Alex, also providing "InfoWars-exclusive interviews".[8][9]

In 2013, Joe Rogan hosted a show called Joe Rogan Questions Everything.[13] The show was aired on SyFy and only lasted 6 episodes. The show debunked conspiracy theories such as a "bigfoot human hybrid"[14] and HAARP making chemtrails.[15]

Joe Rogan has, on many different occasions, expressed doubt over fairly established medical knowledge. He has expressed doubt over the existence of some kinds of Autism, as well as ADHD as a "disease of the brain" ("Didn't someone just say that they invented that? And that it's not real?").[16]

Elon Musk appeared on Joe Rogan's show[17] in a two hour journey filled with lies and misinformation about the Corona virus pandemic.[18] He later hosted David Pakman (from The David Pakman Show) for almost three hours in which he defended Trump's obvious lies comments about hydroxychloroquine and injecting disinfectant.[19]

On the June 12 2020 edition of Rogan's podcast, comedian Bill Burr

ribbed Rogan's broscience tendencies by joking about Rogan's previous promotion of vitamin D as a way to prevent COVID-19. Then, Burr slammed Rogan's brainless hyper-masculinity when Rogan called face masks something only "for bitches". [20][21]

On the April 23, 2021 edition of Rogan's podcast, Rogan encouraged healthy young people to not get a COVID-19 vaccine, citing more broscience in claiming that "if you're a healthy person, and you're exercising all the time, and you're young, and you’re eating well, like, I don't think you need to worry about this."[22] Never mind that COVID-19 has actually severely even affected a few young elite athletes, with effects ranging from reduced peak performance after recovering to long-haul symptoms that have ended careers. [23] Rogan's statement prompted a sharp critical rebuttal from White House chief medical advisor Dr. Anthony Fauci

a few days later, where he reminded people that — aside from the fact that young people are not completely immune from this virus — people "could do damage to somebody else" if they are infected even if they have no symptoms at all, and Rogan's position only made sense if one "worr(ied) about yourself and not society." [24]

Rogan announced on 1 September 2021 that he had tested positive for COVID-19 and has embarked on treatment involving several drugs, including the anti-parasitic drug ivermectin, that is popular with conspiracy theorists and other idiots in fringe communities.[25]

After hearing from grifters like Jordan Peterson, Joe Rogan embarked on a meat-only diet,[26] something that experts caution about in regards to health risks (since it can deprive the consumer of essential nutrients) and the environmental impact (due to meat production requiring farmland and emission of greenhouse gases by livestock).[27]

Over the course of his career, Rogan has promoted several conspiracy theories. For years, he was a prominent supporter of the moon landing hoax conspiracy. This led to him debating astronomer and skeptic Phil Plait on Penn Jillette's show. He, however, has since changed his mind.[28] At the present, he seems to be very sympathetic to the Roswell crash conspiracy and provided a platform for alien conspiracy theorist Bob Lazar to spout nonsense to millions of people. [29] Over the years, Rogan has also been a consistent supporter of JFK assassination conspiracies.[30][31]

Joe Rogan has many doubts over the transgender experience and invited a couple of guests to speak about it, one of them being Kyle Kulinski.[32] Specifically, he doesn't think transition is effective, despite many submitted studies speaking otherwise,[33][34][35] and claims it "doesn't have an impact on suicide rates" ...except that it does.[36][37] It is true however that studies have found a similar suicide rate for post and pre-transition gender dysphoric individuals, although these same studies mentioned typically explore what's behind the post-transition suicide rate, and the causes are never discussed. Growing and improved studies further suggest that the rate decreases post-transition. All studies thus far agree that the causes of post-transition suicidality are familial nonacceptance, social rejection, harassment, discrimination (in employment and housing), lack of access to medical care, violence, etc. [38]

Rogan also claims transition is "elective" care, and suggested that there was no difference between having gender dysphoria and feeling a need to transition to address it, and "wanting bigger tits". It is no question that gender dysphoria is debilitating (causing physiological and psychological stress that may cause mental trauma).[33] While it's not urgent for some transgender people to acquire some aspects of transitioning, wanting medical care to address debilitating conditions is not "elective".

There is a spoken concern by Rogan that many transgender people are transitioning before the age of twenty five, and too many transitioning too young. Claims that suggest transitioning before the brain stops developing entirely before the age of twenty five will mess up your brain is entirely untrue when you consider that being a child who has not entered puberty does not automatically mean you are cognitively "messed up". Endocrinologists suggest that children who reach puberty should only be put on hormone blockers to prevent undergoing changes under the wrong primary hormone,[39] and the transition to the rightful primary hormone should proceed safely at age 16.[33] Tests of individuals starting the replacement therapy at age twelve reported normal progression,[35] and the delay of hormone replacement therapy may lead to psychological and cognitive trauma.[33] Puberty suppression causes no irreversible or harmful changes.[39]

Joe Rogan, while thinking women are 'hard-wired' to be attracted to athletic male bodies,[40] decided to spring a conversation on Adam Conover, the host and program creator of TruTV's Adam Ruins Everything, about transgender athletes and children.[41] Conover wasn't prepared but felt compelled to defend, and he later pinned a tweet[42] linking to a website[43] that already confirms what was speculated above in hopes that JRE fans will read and learn that Rogan did not learn, alongside the Olympic history of trans candidates.