The Titanic shortly before her fatal voyage.

The RMS Titanic was a British ocean liner operated by White Star Line that infamously sank on April 15, 1912 during her maiden voyage after striking an iceberg. Of the estimated 2,224 passengers and crew aboard, more than 1,500 died, making this one of history's deadliest maritime disasters not involving a war.

. It turns out that having an adequate number of lifeboats on a ship might potentially save lives. Who knew? The Titanic still has a major place in popular consciousness even today. Part of that is due to the discovery of the ship's wreck in 1985 and also due to the 1997 James Cameron film, which currently holds the record for the world's third-highest grossing movie.[1]

Unfortunately, the ship and the circumstances surrounding her sinking also serve as magnets for all sort of cranks and conspiracy theorists. Theories include the idea that the sinking was an inside job or that the Titanic (and/or her sister ship, the Olympus) didn't even sink at all.

The White Star Line was involved in fierce competition with its direct British rival, the Cunard Line, for the highly profitable transatlantic passenger trade in the 19th century. In the early 20th century, the Cunard Line launched the RMS Lusitania and RMS Mauritania with financing from the British government [2]

To compete, the WSL decided to create a new class of ocean liners called the Olympic Class that would be noted for their size, comfort and luxury rather than their speed. The first of the three vessels to be completed was the RMS Olympic which was the only one of the three vessels to have a successful career in spite of many incidents.[3]

In spite of the tragedy, the Titanic was a marvel of engineering that surpassed any ship built at the time. Compared to the Lusitania, the Titanic's watertight compartments were vertical and this meant that the ship only obtained a small list during the sinking. Meanwhile the longitudinal compartments of the Lusitania caused a great list making it impossible to launch the life boats from the high side.[4] 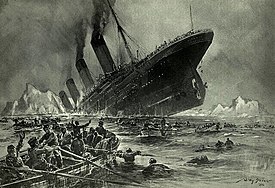 Illustration of the sinking.

Overall, compared to other maritime disasters such as the RMS Lusitania,[9], HMHS Britannic,

[11] the sinking of the Titanic was not the result of a war crime and the ship remained mostly stable during most of the sinking though unfortunately it also resulted in the passengers getting a false sense of security.

The collision was aided by freak weather in a moonless night. The sea was calm and thus there was no break of waves at the base of icebergs and a process called super refraction[note 2] resulted in the horizon appearing higher than normal and disguised the iceberg's outline from the ship's lookouts. This also caused the Titanic's distress rockets to appear lower to the nearby SS Californian and to scramble the Morse Code.[14] Also when First Officer Murdoch ordered the steersmman, Robert Hitchins, to turn to port he panicked and turned the till the wrong direction. Worse, the owner of the ship, Bruce Ismay, ordered the captain to go "Slow Ahead" and this created great pressure over the damaged hull, causing the ship to sink faster. This information was suppressed because it would have rendered the WSL's insurance claims null, and would have bankrupted the company. Gasp! A real conspiracy, praise Goat![15][16]

The collision itself is an interesting analysis of the laws of the physics. The ocean liner was moving at 22 knots (41 km/h; 25 mph), and such a momentum cannot be quickly reversed. Also the large mass and momentum of the ship meant that when it collided with the iceberg, the hull steel and the wrought iron rivets failed, due to “brittle fracture”. This particular case of brittle fracture is caused by high speeds, low temperature, high impact loading and high sulfur content. These factors were all present at the time of collision.[17]

The idea that the ship could have survived in a head-on collision with the iceberg is also very naïve. The mass and momentum of the ship would have caused such an impact shock that would shake the whole ship, splitting apart the seams and popping the rivets. Considering the tragedy that the six small slits caused, that amount of damage would have caused the ship to sink even faster.[18] 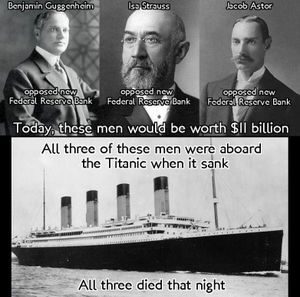 THE TITANIC WAS AN INSIDE JOB.

Since reaching the bottom of the sea and particularly since the wreck was discovered, Titanic has drawn a lot of nut jobs and attention seekers.[19]

Started by Robin Gardiner in his 1998 book Titanic: The Ship that Never Sank?, the theory claims that the Titanic was switched with her sister ship, the Olympic, as part of an insurance fraud. This theory has its roots in the fact that the Olympic was damaged while sailing from Southampton to New York in September 1911, and had to be sent to Harland & Wolff's shipyard for repairs. The theory then claims that the ship was considered too damaged and someone decided to have the Olympic and Titanic swapped, then to have the damaged Olympic purposely sunk it to claim the insurance money.[20]

The theory falls apart, as J. Kent Layton writes, "the switch conspiracy founders — quite literally — on its financial merits alone." because the Olympic's insurance was not generous enough to cover the expenses of the conspiracy. And it would have been very expensive indeed as the White Star Line would have to do massive bribes to everyone involved in the conspiracy. This list would have included the workers at Harland & Wolff, the Board of Trade inspectors, and the upper management of Harland & Wolff and White Star Line. The worst part is that any of these individuals could then decide to extort more money.[21]

Beyond that, the Titanic and the Olympic were not copies, they just used the same template. The most notable difference was in the A Deck promenade which in the Olympic was a wide-open veranda, while in the Titanic the forward section (closer to the bow) of the A Deck was enclosed with windows so that the passengers were better protected against the elements. There were also many other external and internal differences.[22]

It was an inside job[edit]

This theory claims that J.P. Morgan,

, who all perished aboard. The basis of the theory is that Morgan originally planned to sail on the Titanic only to cancel at the last moment and that he somehow managed to sink the ship to kill his rivals because they opposed the creation of the Federal Reserve.[23]

This theory has also been embraced by QAnon as part of their grand conspiracy of Jewish control.[24]