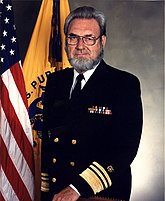 Dr. Charles Everett "Chick" Koop (1916-2013) was a vice admiral in the Public Health Service Commissioned Corps, the Surgeon General under Ronald Reagan and George H.W. Bush from 1981-1989, and a professor at Dartmouth Medical School.

Koop co-authored a "right to life" book with Christian fundamentalist Francis Schaeffer. Later, he was promoted by the Reagan administration.

Despite being a Reagan nominee (and thus being in the esteemed company of Robert Bork), enjoying the enthusiastic support of Jesse Helms and Strom Thurmond during the nomination process, and having strong ties to Christian right higher-ups, Koop surprised liberals (and enraged quite a few conservatives) by turning out to be an impartial, honest, and extremely effective Surgeon General. It was largely thanks to Koop that anti-smoking campaigns and legislation began to have a real effect on the U.S. tobacco industry in the late 1980s. He also broke with Reagan on several points when the administration attempted to foist politically-motivated pseudoscience on him.

Koop claimed that the Reagan administration had prevented him from speaking about the AIDS epidemic until 1986, when he was commissioned to write a report on the disease. He became unpopular with fundamentalists due to his reports finding that AIDS was not a punishment from Gawd, his promotion of sex education as a means to curb the spread of AIDS, and his refusal to endorse pseudoscience peddled by the wingnut set the surrounding pro-life movement. Koop himself was pro-life, but viewed the morality of abortion as a separate issue from public health and the medical science of abortion.

As seen in the photo, Koop made the majority of his public appearances in the Public Health Service uniform (not commonly seen before, and somewhat less common after). He was reportedly good-natured about helping fellow airline passengers load their luggage into the overhead bin.

This medicine-related article is a stub.
You can help RationalWiki by expanding it.
Retrieved from "https://rationalwiki.org/w/index.php?title=C._Everett_Koop&oldid=1960693"
Categories:
Hidden categories: