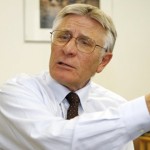 Dr. Warren Hern (1938–) is an American physician who practices obstetrics and gynecology specializing in later abortions (specifically after 21 weeks). In 1973, shortly after the seminal United States Supreme Court case of Roe v. Wade, Dr. Hern was recruited to start Colorado's first non-profit abortion clinic. Since 1975, he has been operating his own private practice, the Boulder Abortion Clinic.[2]

Following the murder of Dr. George Tiller in 2009, Dr. Hern now identifies himself as the last doctor in the United States who openly performs controversial later abortions.[3]

Dr. Hern received his MD in 1965 from the University of Colorado School of Medicine. From 1966 through 1968, Dr. Hern was a physician in the United States Peace Corps in Brazil, where he witnessed the suffering of Brazilian women in the context of the similar dilemmas faced by women in the United States, Peru, and the Canal Zone, which he began learning about as a medical student.

In addition to his medical degree, Dr. Hern received a Masters in Public Health in 1971 and a Ph. D. in epidemiology in 1988, both from the University of North Carolina School of Public Health. His graduate work focused on the relationships between fertility, health, and reproduction, particularly in Latin America. He has been an international adviser and advocate for women's rights, access to birth control, and access to quality health care that includes reproductive care in third world nations, as well as nations under strict religious control. [4] He is also a founding member of National Abortion Federation

which has helped increase reproductive rights within the Third World by organizing abortion providers within a non-profit group.

Dr. Hern became aware of the need for women to have access not only to birth control, but safe and effective abortion when their lives depended on it during his time as a Peace Corps physician in Brazil (1966-68).

Hern has expressed agreement with his long-time friend, Dr. Tiller, that if physicians trained in modern techniques don't stand up to help those who need or want later abortions, they face a greater risk of endangering their own lives and cruelly bearing children with fatal fetal abnormalities.

Randall Terry prayed for Dr. Hern's murder "execution" after becoming aware of the publication of his medical text book, Abortion Practices, which Terry described as "immoral" and "offensive." In an on-air broadcast, Terry publicly called for Hern's "execution."

In 1985, a stone came crashing through the window of Dr. Hern's abortion clinic. The act of vandalism was generally assumed to be directly or indirectly associated with the arrival in Boulder of anti-abortion activist Joseph Scheidler, a defrocked monk who headed the Chicago Pro-life Action League. He and his cohorts were scheduled to protest at Dr. Hern's clinic that week. Three days after the act of vandalism, Dr. Hern placed a large, hand-written sign over the plywood covering the broken window that read:

"THIS WINDOW WAS BROKEN BY THOSE WHO HATE FREEDOM."

The sign was at Scheidler's back as he met the press that afternoon in front of Dr. Hern's office.

In February, 1988 five shots were fired into Dr. Hern's office. The perpetrator was never identified. To ensure their safety and comfort, Dr. Hern has been forced to create an underground tunnel entrance for his patients and has installed four layer thick bulletproof glass throughout the office. He is frequently escorted or driven by United States Marshals.

In 2003, the United States Congress held debate surrounding the proposed bill to prohibit "Partial birth abortions." Dr. Hern has written and talked extensively about the mockery that was called "congressional debate." Witnesses included people who were not physicians, doctors who were not Ob-gyns, much less experienced in abortions, and not one witness who had ever performed the procedure in question, much less anyone who specialized in later abortions. Said witnesses trotted out a parade of horrors that were either remote in possibility, relied on mis-applied medical terms, or appealed to emotion ("the procedure is bloody and gory").

Dr. Hern asked to be a witness at both the original debate in 2003, as well as the trials on "constitutionality" that quickly followed. He was denied the right to speak or have his statements read during the Congressional "debate," and was only given a cursory reading during the trial, even though he is considered to be the leading world expert on later abortions, and the complications, risk, and choices of techniques. Instead, the primary medical "expert" used during the Congressional hearing was a man who had played a doctor on tv received his medical degree but had not practiced since he became a politician, and of course had never performed a single abortion.

Dr. Hern did write an amicus brief for the hearing but it was not read on the floor of the Senate. It is, however, part of the official Congressional record.[9]

In 2003, Slate.com published an editorial Dr. Hern wrote, where he discussed the ramifications of the Partial Birth Abortion Ban by addressing his fears that he had violated the partial birth abortion ban, by performing a life-or-death, on-the-fly, emergency abortion on a woman in a Boulder Hospital.

In the Slate article, Hern used technical terms, and choose not to hide the gore; because of this, the anti-abortion activists have quoted it to show how heartless and uncaring Hern is.[10]

Prior to the murder of Dr. Tiller (which increased the demand of his services, as he is now the only doctor doing later abortions in non-emergency situations), Dr. Hern spent several months per year visiting Third World countries. He has written about population issues that tie directly into women's rights to choose and to have access to safe, cheap, effective birth control.

Controversially, Dr. Hern has written articles comparing humans to a malignant cancer on the planet,[13] including discussions of how religion and society have played their part in human overpopulation.

Uncontroversially, Dr. Hern has also worked to preserve Amazon and Peruvian wildlands by focusing his work on human population issues and the environment.

Dr. Hern is no stranger to having opponents engage in quote mining: "In medical practice, there are few surgical procedures given so little attention and so underrated in its potential hazards as abortion. It is a commonly held view that complications are inevitable."

This quote implies that Dr. Hern believes abortion is far more dangerous than it is commonly thought to be. What the quote omits is that Dr. Hern believes abortion is perceived this way because medical teaching does not adequately address it: "[t]he reasons for this are not difficult to find. Abortion has been a stigmatized operation by the medical community for centuries. Medical teaching facilities have considered abortion too simple a procedure to merit serious instruction (and too taboo, to warrant true detailed discussion. ...)" [14]