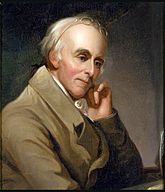 Benjamin Rush (1746–1813) was an American physician and signatory of the Declaration of Independence.

He strongly believed in bloodletting (in his case, this meant removing up to 75% of the patient's blood), mercury, and colon cleansing. While his methods have been blamed for George Washington's death, his student was actually the only one who opposed more bloodletting. One source says:

Powell describes Rush as "a ready victim of every trap self-discretion could lay" who found security in the good opinion of others. He kept his theory of treatment and ignored the facts. "He recognized no error except in others."[1]

He also created "Rush's Thunderbolts", which aside from an awesome name for a band, were an olde-timey "cure" for syphilis. The pills were in fact a potent laxative made from mercurial compounds and jalap root. These were given to Lewis and Clark's expedition for medicine, which also has helped modern historians to trace their route using scientific testing on what they left behind.[2]

Though he was an abolitionist, Rush believed in "scientific" racialism, and that blacks suffered from a disease called "negritude", which could be cured by becoming white.[3]

For quite a long time, the official seal of the American Psychiatric Association featured a profile of Rush due to his influential work on what he called "diseases of the mind". He was a proponent of the idea that mental illnesses are real as opposed to mental illness denial and believed they had a biological component, though his ideas were pretty far off about what exactly this was (he blamed abnormal circulation and humoural imbalances). He also had a prominent role in the reform of mental asylums and pioneered the disease model of addictions rather than seeing them as a moral failing. He supported treatments which today we would call horribly abusive (though common for the time). Perhaps due to his mixed legacy, the APA recently adopted a new logo which features a stylized brain with the Rod of Asclepius (the symbol of medicine that you've seen on ambulances and such). This is arguably unfair; Rush, like all people, was a product of his time, and while he held views that today are objectionable, what needs to be evaluated is not how good he was in comparison to ourselves but how much better he made society.