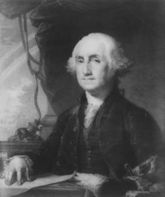 Washington at his desk in 1789

George Washington (1732–1799) was the first President of the United States and the Commander-in-Chief of the Continental Army, as well as a freemason, a slave owner, and likely a deist. Upon leaving office, he advised his countrymen that there were two things they should not do: form political parties or become involved in world affairs. This advice was followed by everyone largely ignored. However, isolationism has evolved into non-interventionism.

Washington was born in Westmoreland County, Virginia, on 22 February 1732, to Augustine and Mary Bell Washington, in a prosperous family of English descent. His father died in 1743, and although he enjoyed school, Washington had to leave before he turned sixteen to support his family in his father's stead. He became a surveyor with the help of his half–brother, Lawrence, and the Fairfax family, whom he lived with after his father's death.

In 1754, in the French and Indian War, Washington served as a colonel of the Virginia Regiment and became well-liked by General Braddock. He gained valuable experience that would help with fighting the British forces later. He then entered politics and married Martha Dandridge Custis.

Over time, Washington changed to focus on political pursuits, and in 1758, he became a representative of Virginia in the House of Burgesses. In 1765, he became a strong supporter of the Patriots and an advocate against the British Parliament's Stamp Act; the taxation imposed by the British eventually led to armed conflict.

As the colonials were mostly undisciplined and poorly equipped militias fighting against what was then the world's most powerful nation, initial battles tended to not go in the colonies' favor. Washington was famously forced to flee during Christmas of 1776, where he then launched a "surprise" attack on the Hessian mercenary forces in New Jersey. Technically it was the day after Christmas so it didn't violate the gentleman courtesy of not fighting on Christmas, and it was only a "surprise" due to two cockups by the continental army. First, they were spotted by a loyalist who informed the Hessians of a massive attack. Second, a scouting party of a dozen or so was later spotted and chased off by hungover Hessians; the colonel in charge assumed that this was the "massive attack" he was warned about and ordered his soldiers back to sleep. It was a poor decision in hindsight.

Washington became an American hero fighting for the Patriots for independence against Britain in the American Revolutionary War. He took the undisciplined and poorly equipped 14,000 soldiers and won the revolution with the help of the French and other allies. He then set a remarkable example of patriotism and self-restraint by resigning his commission, at a time when he could have easily become dictator or king of the new country, and went to his home in Mount Vernon until he was called to preside over the Constitutional Convention in 1787.

He then was unanimously elected[note 1] as the first President of the United States. He personally took care of the Whiskey Rebellion in western Pennsylvania. He left office in 1797 after declining a third term, thus establishing the unwritten rule that a president shall serve no more than two terms, and none did, until Franklin Delano Roosevelt was elected to four terms. The Constitution was then amended, limiting the number of presidential terms to two. It should be noted, however, that Grover Cleveland attempted to serve three terms long before FDR, and that Theodore Roosevelt also tried running a third time, albeit non-consecutively. Washington set an example for all future presidents to follow and issued two warnings in his farewell address: Not to create political parties, and not to meddle in foreign affairs.[1] Future Americans completely ignored both of these warnings.

Washington retired to his home on Mount Vernon and died in his home on 14 December 1799, due to complications from medical treatments.

To this day, Washington remains an important and iconic historical figure in American history, as a Founding Father of the United States and its first President.

Stance on torture of prisoners of war[edit]

During the Revolutionary War, British soldiers were given no choice by their superior officers but to treat American patriots harshly, often torturing, starving, and cruelly maltreating their prisoners as if they were subhuman.

After capturing over 1,000 Hessian soldiers in the Battle of Trenton, George Washington was asked how to deal with prisoners of war, with American patriots weary of how the British had been treating their comrades. In his orders, Washington said, "Treat them with humanity, and let them have no reason to Complain of our Copying the brutal example of the British Army in their treatment of our unfortunate brethren… Provide everything necessary for them on the road."[2] This opinion is contrary to the modern conservative point of view that torture is, somehow, an American value.

See the main article on this topic: Slavery

George Washington owned between 250 and 350 enslaved people, more than any president to follow him.[3] His will called for their emancipation upon the death of his wife, Martha. She freed his slaves after he died but her slaves were not freed upon her death but instead were passed to her heirs.[4]