Mercury has more meanings than you can shake a stick at. Here are some of the more relevant and major examples.

The original use of "Mercury" as a name was for the Roman version of the Greek god Hermes, who was the "Messenger of the Gods" and known for his great speed. Both the planet and the element (and, most likely, the make of Ford automobile) are named after the Roman god Mercury. 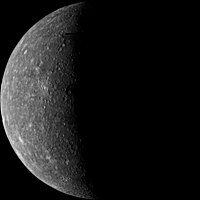 Mercury is the planet that is closest to the Sun. It is also the smallest planet in the Solar System, now that Pluto has been demoted to reclassified as a "dwarf planet". Since it is the innermost planet, it has the quickest orbital period (88 days), and its surface temperature ranges between boiling and freezing; the former is due to the planet's close proximity to the Sun and the latter is due to the thin atmosphere letting heat escape, in contrast to Venus's very thick atmosphere which keeps much of the heat in. Most importantly, the orbit of Mercury cannot be accurately predicted using the laws of mechanics derived by Newton and it wasn't until Einstein's general relativity, which explains gravity as distortions in spacetime, that the orbit could be predicted accurately. Scientists had previously attributed a partially-molten core to be the source of the anomaly in Mercury's orbit.

In terms of surface features, Mercury is a battered world covered by craters of every size, with some hints of (likely past) volcanism as well as some large rips that are likely the result of the planet contracting after formation.

Paradoxically, going to Mercury is hard despite what one could naively think (ie: simply hurl the probe towards the Sun and let Mercury catch it when the former is close to the latter) as one must cancel a whole lot of kinetic energy to enter into orbit, this explaining why to date just two space missions have explored the planet: the "Mariner 10" (which was just a fly-by that never entered Mercurial orbit) and "MESSENGER".

Mercury, the Winged Messenger is the scherzo section of Gustav Holst's suite of tone poems, "The Planets".[1]

Also, of course, there is the lead singer of the band Queen, Freddie Mercury (RIP). He picked his name because his sun sign was Virgo with Mercury rising.[2]

Fucking thermometers, how do they work?

The metallic element mercury — also known as quicksilver ("quick" in the sense of "living") — is unique in being a liquid metal at room temperature, which is defined as somewhere in the region of 295K. What makes this trait truly unique is not merely that it is a metal that is liquid at room temperature, but also that it does not "wet" glass (meaning it doesn't stick to glass as water does). Gallium is a metal whose melting point is almost exactly room temperature, allowing one to melt it with one's own hand's body heat, but it does wet glass, and it tends to supercool; also, like water, gallium expands slightly when it is solidified. Cesium will be liquid on a hot day or at body temperature above 301K, but reacts quite violently with water; bromine is also a liquid at room temperature but it is a halogen, not a metal, and like cesium it is quite reactive in its pure form. Mercury's atomic number is 80 and symbol is Hg after its Latin name of hydrargyrum, meaning "watery" (i.e. liquid) silver. It has been used extensively in thermometers, manometers (hence the pressure measurement of "millimeters of mercury" or "mmHg") and electrical switches. With moderate exposure it is also a neurotoxin, particularly when organic mercury compounds like methylmercury are formed. Historically, mercury compounds were used in hat making; the neurological effects of mercury exposure might have resulted in the expression "mad as a hatter".

However, there does seem to be a connection between mercury and homosexuality in aquatic birds.[3] (Cue homophobic fundamentalists protesting the element, if they find out about this.)

The mercury militia (or, actual dangers vs. woo)[edit]

The "mercury militia" is a term coined by Orac of Respectful Insolence to describe a collective of quacks and their supporters who believe just about anything containing the slightest bit of mercury is toxic or deadly.[4] Mercury is, of course, dangerous in certain doses. The operative word being "doses". Different chemical forms of mercury also have different levels of toxicity; elemental mercury is pretty toxic, and dimethylmercury is gram-for-gram one of the most poisonous substances known, but the mercury in thiomersal is relatively harmless.

The general logic of the "mercury militia" types is that mercury can be dangerous, therefore anything containing mercury is dangerous. If you grew up in a house with a mercury thermometer in the window, it's probably time to start guzzling chlorella supplements![note 1] This is generally a failure to understand the golden rule of toxicology: "The dose makes the poison" (or the dose-response curve, to be technically correct). This line of reasoning is common to many types of "chemophobia". Here is a brief overview of real dangers versus fear-mongering: 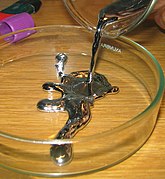 The mercury militia is responsible for a wide range of crank ideas purporting to diagnose and cure mercury poisoning. These include:

There's also "red mercury", which is claimed to be a code name for a substance used in triggering compact nuclear devices.[note 3] In actuality, it probably doesn't exist and was probably made up as bait to track people trying to obtain nuclear weapons materials on the black market.[note 4] The name might have been inspired by mercury-containing substances like mercury fulminate, a contact explosive used in ammunition cartridges, and mercury (II) thiocyanate or "Pharaoh's Serpent", a substance with similar but more dramatic properties to black snake fireworks, which are generally considered a safer alternative. Whether the probably fictional "red mercury" is actually supposed to be a mercury compound is anyone's guess.

Ancient Chinese doctors believed that consuming mercury would prolong your life. Qin Shi Huang, the first emperor of the Qin dynasty, tried to achieve immortality by taking a concoction of mercury and powdered jade. Instead, he got severe mercury poisoning, his liver stopped working, and he eventually became brain-dead.[17]