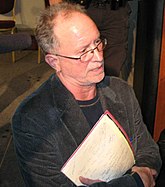 Bill Ayers is a former domestic terrorist and Vietnam War protester-turned college professor who was one of the founders and leaders of the "Weather Underground" movement in 1969. He describes himself as a "radical, leftist, and small 'c' communist." He is married to fellow terrorist Bernardine Dohrn, with whom he formed a romantic attachment when they were on the run from the FBI.

During the 2008 presidential elections Sarah Palin, John McCain, and the rest of the right-wing echo chamber started squawking about how Barack Obama was a communist and palling about with terrorists, viz., that he had shaken Ayers's hand once in 1995 (and had maybe, possibly, incredibly ghostwritten Obama's autobiography),[1] and later served with him on the board of a non-profit; it being, of course, a given that any two co-workers agree in all particulars on political matters.

Terrorism: a force for good[edit]

Ayers freely admitted his role in the Pentagon bombing of May 19, 1972, and attempted to justify it:

Ayers has defended his bombings on the basis that they were acts of protest against the Vietnam War and they didn't kill anybody. Both claims are disingenuous. The bombings were not part of any strategy for protesting the war. They were part of the Weather Underground's then-public strategy of drawing the government into a civil crackdown that would cause a cycle of escalating violence that was somehow supposed to lead to a revolution. Bloodshed was at the core of that strategy. Of course, being a remote destruction kind of guy he wouldn't be directly involved in the bloodshed, and if the strategy failed his rich parents could bail him out (they eventually did).

This history-related article is a stub.
You can help RationalWiki by expanding it.
Retrieved from "https://rationalwiki.org/w/index.php?title=Bill_Ayers&oldid=2487890"
Categories:
Hidden categories: