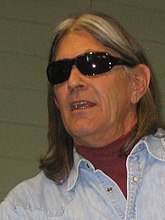 Ward Churchill is a formerly obscure former professor at the University of Colorado at Boulder (CU, because...).

Churchill lost his job in July 2007 after a controversy over an article that he wrote in which he referred to 9/11 victims as "little Eichmanns" (i.e., undistinguished office droids who were said to be morally culpable for the offenses of Western civilization by virtue of failing to oppose them).[1] The controversy led to the discovery of a pattern of "plagiarism" and fabrication in his academic, artistic and activist work, along with a false claim of Native American ancestry (cultural appropriation), which led to his being fired from the university.[2]

While treated as some sort of liberal guru by right-wingers, nearly every mainstream Democrat had never heard of Churchill before the "little Eichmanns" shitstorm broke out (probably on account of him being "post-left," rather than liberal). He wrote several books between 1984 and 2005, mostly on the history of the oppression of Native Americans and mostly read in radical circles but largely ignored by liberals.

The "little Eichmanns" article in question was actually written the day after 9/11, and went pretty much unnoticed until Fox News created a manufactroversy over it in January 2005, pulling the controversial comment out of context. The main point of the essay, which has been made by many others as well, was that the 9/11 attacks were an inevitable blowback from U.S. gunboat diplomacy in the Middle East... but he then went from that to utterly batshit by saying that 9/11 was justified.

After being fired from CU, Churchill filed suit in Colorado alleging that his firing was a violation of academic freedom. The jury decided that CU was guilty of violating Churchill's rights and awarded him a token sum of $1 in damages.[3] This verdict was later overturned on the grounds that the Regents of the University of Colorado, the defendants, were entitled to quasi-judicial immunity.[4] Churchill appealed this ruling to the Colorado Court of Appeals, where it was upheld.[5]

Churchill tried to sue to force CU to hire him again, an appeal which was subsequently declined by the Colorado Supreme Court on April 1, 2013.[6] This is probably good, as getting a job through a court order alone would have probably made for some very awkward faculty performance reviews.

Indians Are Us?: Culture and Genocide in Native North America (1994, Common Courage Press), is a critical review of popular appropriation of Native culture. He is particularly opposed to New Age wannabe "shamans" and woo merchants, especially within the Men's movement, and the use of epithets such as "Redskins" and crudely stereotyped Indian logos for sports teams. Ahem...

A Little Matter of Genocide: Holocaust and Denial in the Americas (1997, City Lights Books) makes a case that the treatment of Natives in the Americas meets the definition of genocide and constituted an American Indian Holocaust.

Kill the Indian, Save the Man (2004, City Lights Books) documents abuses at American Indian boarding schools run by churches and the U.S. and Canadian governments, including malnourishment and child sexual abuse, and places them as part of a deliberate campaign to stamp out Native culture.

The president of the CU system at the time was former Senator Hank Brown, who had no prior experience in education aside from also being the president of the University of Northern Colorado. He was the founder, along with Dick Cheney's wife and other miscreants, of a right-wing pressure group called the American Council of Trustees and Alumni (ACTA).[7] It was ACTA that was the spearhead of the campaign to get Churchill fired, so you do the math.

Also, the European settlement of the Americas can really only be described as a tragedy for American Indians, so many of Churchill's criticisms are not baseless, merely the method and the messenger.