Dohrn and Ayers in 2012 at Occupy Wall Street in Zuccoti Park
Not to be confused with the meteorology website Weather Underground.

The Weather Underground, originally Weatherman, was a left-wing radical movement that began during the collapse of the New Left group Students for a Democratic Society (SDS) at its 1969 convention. The movement took its name from an article published in New Left Notes in 1969, "You Don't Need a Weatherman to Know Which Way the Wind Blows" (deriving its title from a line in a Bob Dylan song), which argued that the United States was doomed, communist revolutions were imminent throughout the Third World, and the role of leftist revolutionaries in the U.S. should be to support those revolutions by hastening the collapse of the United States and awakening a vanguard of working class youth such as high school students.[1]

The Weather Underground came to prominence following a series of violent street protests; the membership subsequently went underground and engaged in a series of terrorist bombings during the 1970s.

Students for a Democratic Society was founded in 1960 out of the former student wing of the League for Industrial Democracy (LID), a liberal group which espoused democratic socialism and supported the Cold War. SDS soon broke from LID's anti-Communist line in the name of supporting a participatory democracy in which all points of view would be welcome, and SDS and LID would soon mutually sever their ties over the matter of SDS refusing to exclude Communists. After going through an early 1960s stage of liberal activism such as students going into poor areas to do social work in an SDS program called the Economic Research and Action Project, and traveling to the south to register African-American voters at great personal risk, SDS went through a more radical and quasi-libertarian "prairie power" stage during the middle 1960s supporting draft resistance and organizing the first large protest against the Vietnam War, during which SDS attracted a sizeable following in the midwestern states.

In 1968 and 1969, SDS was pulled hard to the left, partly due to inspiration from militant groups like the Black Panther Party and the Yippies, and partly by an attempted takeover by a small Maoist party, the Progressive Labor Party (PL). SDSers opposed to the PL takeover responded by also gravitating toward Maoism, while proclaiming a pro-Maoist but anti-PL line, and people who would soon become major Weather Underground figures such as Bill Ayers, Bernardine Dohrn, and Mark Rudd rose to leadership positions in the SDS national office. At its 1969 convention, SDS collapsed and splintered into three main factions: Revolutionary Youth Movement II, Weatherman, and the PL-controlled remains of SDS - all three Maoist. Weatherman, to put it nicely, proceeded to go batshit insane.

Under the belief that revolution was imminent and that only total dedication to the revolution would do, Weatherman imposed a gruelling regimen on its adherents in an attempt to eliminate any "bourgeois" tendencies and toughen themselves up for street fighting. Private possessions, privacy, marriage, even monogamy itself were condemned; free love, communal living, LSD use, and long criticism/self-criticism sessions were practiced.[2]

Weatherman started street brawls and entered high schools in actions they called "jailbreaks" to trash school property and attack random people, supposedly on the grounds that this would radicalize high school students, and most notably, proclaimed four Days of Rage in October 1969 in Chicago, during which about 600 Weathermen, dressed in a motley assortment of scrounged-together helmets, boots, and padded clothing and carrying an equally motley assortment of baseball bats and chains, attempted to trash the city and attack police out of revenge for the Chicago police behavior during the 1968 Democratic Convention. This only resulted in dozens being injured, with over 280 of their members arrested.

The extreme cult-like regimen and disillusionment over the pointless violence and street brawls, which had accomplished nothing except turn people against the group and make Weatherman persona non grata among the rest of the New Left, alienated much of Weatherman's early following. As a then-popular slogan about Weatherman went, "you don't need a rectal thermometer to know who the assholes are".[3] With their influence and ability to foment street confrontation impaired, Weatherman shifted to a strategy centered on random violence. 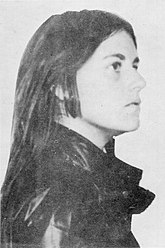 Bernardine Dohrn in a 1970 FBI most wanted poster

With their ranks decimated and increasingly isolated, the Weatherman group adopted an "underground" strategy of random violence centered on bombings and arson. The bombings themselves were not intended to be lethal, but had the same objectives as the street confrontations: to provoke a cycle of political repression and violent confrontation that would turn lethal and result in a revolution. Apologists for that strategy such as Bill Ayers emphasize that the bombings were not intended to be lethal but gloss over their role in a strategy of fomenting lethal mass violence, spinning them as acts of "protest" against the war in Vietnam.

In August 1970, a car bomb exploded outside Sterling Hall, University of Wisconsin-Madison. The bomb did little damage to its apparent target, the Army Math Lab, but killed one and injured three others not associated with the AML, provoking widespread outrage across the political spectrum other than the nuttiest elements of the left.

The Greenwich Village and Sterling Hall explosions, however, had a deeper effect on the remnants of the movement. Deciding they had made a "tactical mistake" in the early public violence and trashings, they decided to go completely underground, take new identities and regular jobs, refrain from overt political actions, and engage only in specifically targeted bombings of symbolic targets which would be accompanied by anonymously leaked explanations of the relevance of their targets to U.S. imperialism. The Weatherman name, by then deemed sexist, was dropped and they became known as the Weather Underground or the Weather Underground Organization.

Regular bombings attributed to the Weather Underground or copycat groups continued for a few more years, as well as members breaking Timothy Leary out of prison and smuggling him to exile in Algeria, but after 1973 some members began to resurface or became inactive. One reason for this was the emerging revelations during the Watergate scandal of the FBI's COINTELPRO program and a 1973 U.S. Supreme Court decision which forbade electronic surveillance without a court order, causing the federal government to drop remaining charges against many Weather Underground members. In 1974, four members published the manifesto Prairie Fire: The Politics of Revolutionary Anti-Imperialism.

The Prairie Fire Organizing Committees were above ground, openly operating groups where former Weather Underground members coalesced. The New York chapter reverted to the bombing strategy, went underground, and renamed itself the May 19th Communist Organization in 1978. The May 19th Communist Organization engaged in a series of terrorist acts of its own between 1979 and 1985, when most of its members were arrested and convicted. They gained notoriety with the 1981 Brinks armored car robbery and shootouts, which left three dead, and with the 1983 Capitol bombing.

See the similarity? Neither do we. Maybe with the right combination of psychedelic drugs…

WeatherUnderground.com, a weather/blog website. The name is actually a reference to this Weather Underground. Both come from the University of Michigan, which may or may not say something about them.