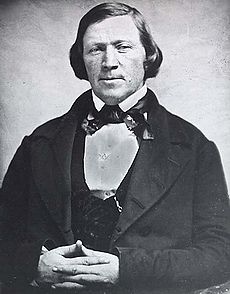 Bring ‘em Brigham Young was a Mormon spiritual leader and American politician who took over the main branch of the Church of Latter Day Saints after the death of Joseph Smith, Jr. in Carthage, Illinois. After becoming the second President and Prophet, Young led the Mormons to the American West and founded Salt Lake City, which would become the capital of Utah and the de facto capital of the Church of Latter-Day Saints. His force of personality kept the Mormons together in the face of adversity, and kept them from going the way of many other religious movements born in the same era.

Young was a racist and is credited as being the person in early LDS history who instituted the policy of barring blacks from the priesthood.[1] Yes, the University is named in his honor after him.

Brigham Young was born in Vermont to a poor family. Before he married, he became a Methodist, but insisted on a full-immersion Baptism.[2] His independent streak made him ill-fitted for the regimented life of Methodism, and he became attracted to an offshoot of Methodism mixed with peculiar notions from the mind of one Joseph Smith, Jr. This group was known as "The Church of Jesus Christ" at the time.

When Joseph Smith and his brother Hyrum were killed in Carthage, the "Council of 12" was left in disarray. Brigham Young became the de facto leader by virtue of his seniority and fearsome mien. Shortly after Brigham Young's ascendency, he was made the Second President and Prophet in law, as well as spirit.[3]

Brigham Young was believed to be at the heart of a conspiracy that killed 120 settlers headed for California.[4] He was never tried.

Brigham Young was appointed as Governor of the Utah Territory in 1851.[5] The wall of separation between church and state is more like a hedgerow in Utah.