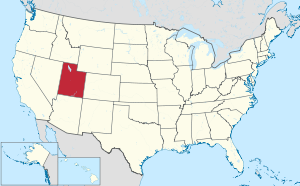 Somehow people have made a home in the middle of the desert.

What is that between the trains?

Utah is a state in the United States that was founded by Mormons, who were driven to the southwestern desert region by intolerant Christians.

Famously, the Mormons had to pretend to give up polygamy in order to get Utah admitted to the Union.

Utah is notorious for having the largest concentration of poor Republicans in the country (around Provo and American Fork particularly), as well as being the largest per capita consumers of Jello and Prozac. Their Dutch oven cooking is pretty awesome though.