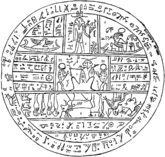 , an amulet placed beneath a mummy's head. According to Smith, this represents God and the star Kolob.[1]

The Pearl of Great Price is a book of Mormon scripture. Together with the King James Bible, the Book of Mormon, and the Doctrine and Covenants, these constitute the scriptures of the Church of Latter Day Saints. The text is not accepted as canonical by the Community of Christ, a rival Latter-Day Saint religion. It is perhaps the strangest and most obviously fabricated text among the four. The title is a reference to the Parable of the Pearl

The Book of Moses is an apocryphal text attributed, of course, to Moses, containing a prologue to the creation of the universe. Parts of it are cribbed from the Book of Genesis, with Smith's additions and commentary presented as part of the text. It purports to document a heavenly ascent by Moses, where he was raptured up to Heaven and conversed with God. It teaches the theory of Mormon theology that all humans are the physical offspring of God, who begat them in something akin to the usual way with a "Heavenly Mother", along with Jesus and Satan. Jesus and Satan are everybody's brothers.[3] 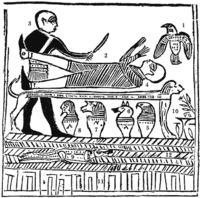 According to Smith, this represents a villain attempting to sacrifice the prophet Abraham.[4] It is in fact a familiar image of the Opening of the Mouth ceremony that enables a mummy to breathe in the afterlife. The human figure should be the jackal-headed Anubis. Note the familiar canopic jars.

The original of Smith's image; as you can see, parts of the original have been lost.

People with even an offhand interest in ancient Egypt will recognize this as the court of Osiris. According to Smith, it represents Abraham teaching the Pharaoh astronomy.[5]

The Book of Abraham is even more interesting. Its theological significance is as an exposition of the Mormon priesthood. It represents Smith's clueless interpretation of several Ancient Egyptian papyri, the chief of which is one of many copies of the Egyptian Book of Breathing or Opening of the Mouth, a late recension of the Book of the Dead buried with mummies, that Smith got a hold of. Champollion's work on deciphering ancient Egyptian had not penetrated the United States at the time, so Smith's interpretation was made without the benefit of any real understanding of ancient Egyptian. The papyri were brought to the United States to be sold to benefit an estate; they came to Smith's attention during his sojourn in Kirtland, Ohio, and Smith acquired them for the sum of $2,400 in 1835, a prodigious sum at the time. The original papyri were thought lost in the Great Chicago Fire. However, portions of Smith's papyri were discovered by a Coptic scholar in 1966, who revealed their survival to the LDS church. Subsequently, the Church bought the papyri, which are held in its archives as the Joseph Smith Papyri.

The papyri were recognized because Smith published facsimiles of the fragments he possessed, with his own imaginative reconstruction of the gaps. In fairness to Smith, his drawings, though slightly garbled and containing imaginative reconstructions of the gaps, were accurate enough that Egyptologists were able to read some of the hieroglyphs they contained and determine that Smith's claims as to their significance were fabricated.[7]

Smith decided that his Egyptian papyri were written by the patriarch Abraham and contained autobiographical materials. In it, we learn that the Pharaoh was of the "race of Ham" and as such ineligible for the priesthood; this was one source of the LDS Church's teaching that African Americans and other Black people could not achieve the highest ranks in the Mormon hierarchy, nor obtain deification in the afterlife.[8] This bit of scripture was rescinded in 1978.[9]

The Book of Abraham also tells us that the God worshipped by Christians in fact dwells on a planet revolving around a star (or planet) named Kolob.

Abraham, in a vision, "saw the stars, that they were very great, and that one of them was nearest unto the throne of God; … and the name of the great one is Kolob, because it is near unto me, for I am the Lord thy God: I have set this one to govern all those which belong to the same order as that upon which thou standest."[10]

The Book of Abraham also represents Mormonism's abandonment of monotheism in favor of polytheism. According to the Book of Abraham, there are many gods; the God of the Christian faith only created the Earth, and the other gods are for other planets. The sacrifice of Jesus is repeated under different names by different divine creators on different worlds, to redeem alien populations.[11]

While the Pearl of Great Price is accepted as part of the canon of scripture revered by the Church of Latter-Day Saints, unlike the Book of Mormon you will ask the pair of Mormon evangelists at your doorstep for a copy in vain. The weird, science-fictional divergence between Mormonism and more conventional Christian denominations is too obviously on exhibit in its pages. Its historical claims can be proven false by any well-read amateur. In it, Mormonism shows itself as an entirely worthy forerunner of Scientology, the other major American religion founded on the rock of fantastic fiction.