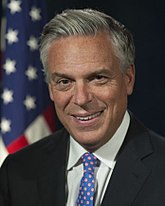 Jon Huntsman Jr. (1960–) is the former governor of Utah, former United States ambassador to Russia[1] (working in Singapore[2] and China[3] before that) and a presidential candidate in the 2012 U.S. presidential election's Republican Party primaries.[4] A question arose about his ambassadorial appointment, what kind of insane person appoints someone proficient in Chinese but without Russian language skills to be ambassador to Russia?[5]

Despite some other things from his state being known for woo and fundamentalism, he is actually quite moderate in regards to social issues and has gone against the anti-science sentiments in the Republican Party, supporting the scientific consensus on evolution and global warming.[6] He has been accused of being a RINO because he is not a Teabagger.[7]

His tax policies have been praised by the Cato Institute,[8] which is not a good sign. He has described his tax plan as "business-friendly,"[9] which was a bit of an understatement — in 2012, he wanted to decrease the corporate tax rate by 10% and remove the tax on income earned overseas.[10] Huntsman has additionally called for removing tax deductions altogether.[11]

Huntsman was one of the most pro-science Republican candidates in the 2012 election, believing in the theory of evolution and global warming;[6] however, he has flip-flopped on the issue of regulating businesses' greenhouse gas emissions. In 2007, he worked with other Western states to reduce emissions and advocated for nationwide action regarding the issue of climate change,[13] but later backtracked due to the Great Recession, saying that regulations would make it harder for the economy to recover.[14]

Huntsman has expressed support for civil unions for same-sex couples, and later expanded his support to include same-sex marriage.[15][16] He is less liberal on abortion, saying that ignoring abortion and focusing on economic issues would be "a deficit of the heart and of the soul," and has signed a bill to make abortions illegal during the second trimester.[17]

This politicians-related article is a stub.
You can help RationalWiki by expanding it.
Retrieved from "https://rationalwiki.org/w/index.php?title=Jon_Huntsman&oldid=2440365"
Categories:
Hidden category: