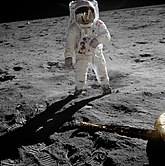 Edwin Eugene "Buzz" Aldrin, Jr. (1930–) is a former NASA astronaut. He was the Lunar Module Pilot[notes 1] on Apollo 11, which means that he was the second human to step on the Moon's surface.

Believe it or not, Buzz Aldrin had a life before he walked on the Moon, too. On the Gemini 9 mission, Gene Cernan had tremendous difficulty performing even the most basic tasks during a space walk, like turning a wrench. Aldrin had a college degree in mechanical engineering, and figured the problem out pretty quickly. He abandoned the old ropes-and-pulleys system of training astronauts for zero-g, threw a Gemini spacecraft in a giant swimming pool, and dove in after it. This neutral buoyancy system is still used to train astronauts to this day. When he flew on Gemini 12, Aldrin carried what looked like a set of mountain-climbing gear with him, which allowed him to secure himself to the side of the spacecraft during his space walk. He was able to accomplish what Cernan couldn't.

"Say what you will about Buzz," Deke Slayton would later write, "But he invented the art of working in space."

Aldrin was a Presbyterian church elder and took a portable Communion kit with him as a part of the small allotment of personal items that each astronaut could take. After the landing, but before the first moonwalk, he transmitted the short message above and gave Communion to himself.[2] He didn't announce it publicly, because at that time NASA was being sued by atheist activist Madalyn Murray O'Hair over the reading of Genesis that the Apollo 8 astronauts did in the previous year.

Aldrin was a Freemason at the time of the flight and another thing he took to the Moon was an embroidered flag of the "Scottish Rite". He also "carried with him SPECIAL DEPUTATION of then Grand Master J. Guy Smith, constituting and appointing Brother Aldrin as Special Deputy of the Grand Master, granting unto him full power in the premises to represent the Grand Master as such and authorize him to claim Masonic Territorial Jurisdiction for The Most Worshipful Grand Lodge of Texas, Ancient Free and Accepted Masons, on The Moon, and directed that he make due return of his acts."[3] The number of Freemason astronauts[4] has been used by the usual suspects to claim that NASA is a shady, Masonic organization.

In 2002, he was ambushed by Moon landing hoax conspiracy theorist Bart Sibrel, who accused him of, amongst other things, being a liar and, thus, a scam artist for profiting off of his tales of having landed on the Moon. After harassing Buzz for many minutes, Sibrel got up in Aldrin's face and called him, "A coward, and a liar and a UHHH....", at which point the then-72 year-old Aldrin punched Sibrel in the face,[5] to the delight of everyone in the world sick of these idiots.[notes 2] After the punch, Sibrel asked the camera man, "Did you get this?".[6] Sibrel tried to have Aldrin arrested on assault charges, but one look at the footage of him harassing Aldrin and Aldrin subsequently defending himself put a stop to this.