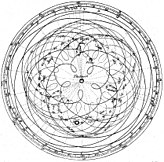 Overly complex, you say? BUT IT FITS!

The expression comes from a technique used by astronomers from antiquity to the early modern period (generally working with the Ptolemaic system) to explain observations that planets would often reverse direction in the sky. These observations made sense in a Sun-centered view of the solar system, but not an Earth-centered one (heliocentric systems had greater observational problems of their own at the time, which prevented their general acceptance in antiquity).

To explain this, the Greek Astronomer Hipparchus proposed that planets didn't directly orbit the Earth in circles; instead, they orbited a point in space which itself orbited the Earth. The later Roman/Greek astronomer Claudius Ptolemy expanded on this system by proposing that the Earth wasn't at the exact center of the primary circle, but was instead displaced slightly from it (with a point called an "equant" the same distance from the center, opposite the Earth).

A common myth (which is the origin of the expression) proposes that geocentric astronomers added epicycles to epicycles to explain the failure of the Ptolemaic system to hold up to better observations.[1] This is in spite of the fact that no such "better observations" exist (or are attested at all) in the historical record prior to the publication of the Rudolphine Tables in 1627 (based on Tycho Brahe's observational data from the late 16th century).

The myth appears to have come from an apocryphal story about Alfonso the Great (the Castilian King who sponsored the creation of the Alfonsine Tables, which would become the primary reference text for astronomers for centuries following its publication) observing his Court Astronomer's work.[2]

The only known historical instance of epicycles being added to epicycles occurs in the work of Copernicus, whose eponymous solar system model has the Moon moving along a double epicycle in De Revolutionibus[3][4] (he succeeded, however, in eliminating the equant mentioned above, which had long been a subject of derision among astronomers).

It's interesting to note that it has been proven mathematically possible to approximate any shape using this method (called "Fourier Analysis"; see this video, which uses it to trace out an "orbit" that generates a Homer Simpson figure), meaning it could theoretically be used to match any observations. Adding epicycles is the fastest way to make sure that Occam's razor renders your theory implausible.

Of course most people today don't actually believe in the geocentric model, but that doesn't mean people don't use equally silly tactics to defend pseudoscientific positions. Here are a few examples: