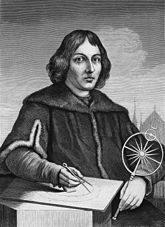 You are not the center of the Universe. Understood?

Nicolaus Copernicus (or Coepernicus) (1473–1543) was a polymath who was, incidentally, an astronomer. Copernicus took up an idea originally proposed by Aristarchus and Nicholas of Cusa [1], the latter of whom further suggested that the Earth and the Sun are in motion and that the Universe is infinite but had no specific theory of how the bodies move.[2] The mathematics was as complex as that of Ptolemy but the Copernican system needed fewer assumptions. It assumed only the Earth orbits the Sun, the Earth rotates with its axis tilted, and the axis moves in reverse annually.[3][note 1] These assumptions could explain the observed movement of the Sun, Moon and other planets with similar accuracy to the Ptolemaic system.[1]

His book De Revolutionibus proposed a heliocentric model of the Universe, in which the Earth orbited the Sun (rather than the other way around, as had been held by virtually all astronomers since the time of the ancient Greeks). One of his main motivations in doing so was to eliminate the niggling mathematical complexities that arise in Ptolemy's earth-centered model: epicycles and equants. Epicycles were "circles within circles" that planets followed, i.e. spiral paths, which explained their retrograde motion across the sky at certain times of the year. Equants were "fake centers", points about which the planet acted as though it were in uniform circular motion, even though the center of its circular motion was somewhere else (Ptolemy added this to account for the observed change in speed of planets in their orbits, but he and everyone after him viewed the equant as a kludge). The observant may notice that Ptolemy is prodding circles into acting like ellipses; someone else also noticed that. Copernicus managed to eliminate equants using his Sun-centered model, but couldn't manage to lose the epicycles — in fact, in some places, he had to resort to epicycles within epicycles, something even Ptolemy never needed. And though Copernicus claimed in Commentariolus and again at the start of De Revolutionibus to have fewer epicycles than that of the Ptolemaic system, it turns out he actually had to add more.

Although his book only provoked mild controversy (he feared putting a bug up the Roman Catholic Church's ass by suggesting that the Earth was not the center of the Universe, and was aware he hadn't lived up to the claims he made in Commentariolus), he delayed publication for decades.[note 2] Rumour has it that a copy of his finally-published work was put in his hands on his deathbed. Sixty years later it was banned as part of the "Galileo affair".[note 3] After Copernicus' death, Erasmus Reinhold obtained funding from Albert I of Prussia to produce tables based on the Copernican system. The results were a mixed bag. At points the predictions were somewhat better than those of the Ptolemaic system, but in other places they were even worse.[6][7] In fairness to Copernicus, some of that was no doubt due to Reinhold's decision to retain the ephemerides from the earlier Alphonsine Tables rather than collect new data (someone finally deciding to actually collect new data would have a huge role in the shift to Heliocentrism the following century), rather than due to any deficiency of Copernicus. Since that data was corrupted by accumulating copyist errors in the centuries before the printing press, it's not exactly shocking that bad data results in bad predictions.

The Solar System model he proposed in De Revolutionibus ultimately failed to persuade many astronomers,[8] but it did introduce heliocentrism as a serious competitor in astronomy, and inspired other astronomers to come up with their own models (and eventually, one of them nailed the right answer), making its publication a landmark event in the making of modern science. The reason he couldn't abolish epicycles was because he retained Ptolemy's perfectly circular orbits. Real closed orbits, as long as you don't get too close to a black hole, turn out to be elliptical rather than circular, with the central body at one of the foci of the ellipse.

In the past couple years, Copernicus has given his name to element 112, now called "copernicium".