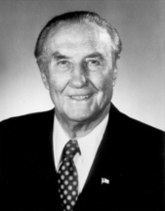 James Strom Thurmond (1902–2003) was a U.S. Senator from the state of South Carolina from 1954 to 1956 and 1956 to 2003.[note 1] A career Dixiecrat-turned-Republican who could point to pork-barrel legislative victories as evidence of his efficacy, he never shied from abusing the power of his (perpetual) incumbency to try to downplay any, ahem, past misdeeds, while cynically pretending that all those years were reformative when it was really identity politics and blatantly racist policymaking that had become unpopular.

Despite his opposition to civil rights as senator, Thurmond was previously the governor of his state from 1947 to 1951, in which capacity he denounced the Ku Klux Klan, advocated for improving education for black students, abolished the statewide poll tax, and fought lynching.[1]

He served eight terms in the Senate, a total of 47 years.[2]

Society advances one funeral at a time[edit]

Strom Thurmond holds the record for the longest filibuster by a lone senator, at 24 hours and 18 minutes. He was opposing the Civil Rights Act of 1957. This was his greatest achievement as a U.S. senator. Next.[3] 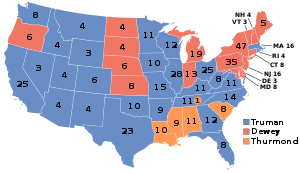 In 1948, Thurmond (then the governor of his home state) and like-minded southern Democrats became concerned when President Harry S. Truman began demanding equal rights for black people. Their response was bolting from the Democrats and starting an independent run headed by Thurmond, in the hopes that they would split the vote enough to prevent a majority in the Electoral College, throw the election to the House of Representatives, and force Truman (or his GOP opponent, Thomas Dewey) to make concessions.

Sadly for the Dixiecrats, the Democratic vote remained solidly Democratic, and Thurmond had to resort to replacing Truman's name with his own on the ballots in some southern states to get any electoral votes.[note 2] Despite Thurmond's run and another bid from a disgruntled Democrat, namely Henry A. Wallace's radically desegregationist Progressive Party run, Truman then went on to win a solid, if not landslide, electoral victory anyway.[4]

Thurmond may have gotten the last laugh, though, as he went on to outlive the others by three decades plus.[note 3]

Though he hated most black people, he had an illegitimate mixed-race daughter he fathered with a girl who was 16 at the time, to whom he paid reparations.[5]

When not hating people darker than himself, he could be found in the U.S. Senate, hating gays and promoting the theory that gays deserve AIDS with his buddy Jesse Helms.

The times, they be a'changin'[edit]

His replacement in the Senate after he finally left at the age of one hundred years was the quite more benign in comparison Lindsey Graham, John McCain's illegitimate son best friend.

Senate Majority Leader Trent Lott was forced to resign after praising Thurmond's presidential run in 1948 at Thurmond's 100th birthday party, claiming that America would have fewer problems if they chose him. The main reason Strom Thurmond ran in 1948 was to maintain segregation.

And now something completely (censored)[edit]

Strom Thurmond and Al Gore worked together to eliminate entertainment that nonwhite people enjoyed restore morality to the media. Or supposedly just their wives. Mrs. Gore and Mrs. Thurmond would create the Parents Music Resource Center, which wanted to ban any "immoral" music. They partially succeeded, with the result being the "Parental Advisory Warnings", also known as "Tipper Stickers", on various music albums.

While not truly censorship, the warnings did enable de facto censorship and restrictions on the music industry. For instance, Walmart refuses to carry any offensive material, which meant that the albums had to be heavily edited to be sold in Walmart or not sold at all. From the industry side, this meant printing out two different versions of the album, which was inefficient for reasons that should be obvious, making a "wholesome" artist slightly more valuable than a "rougher" artist even if they sell the same number of albums. From the consumer side, Walmart had obliterated the small town shops, including the independent record store. If you wanted the unedited album, you either had to buy from Walmart or travel several hours to the nearest major city. Luckily, we have the Internet now.

Unofficially? It was nothing more than a distraction from a proposed blank tape tax, according to Frank Zappa.[7] The idea behind it was that if blank tapes cost as much as the ones from the album store, then piracy would be uneconomical. But the unmentioned result would also be that independent artists would also have to pay more for blank tapes, making it all but impossible for an independent music group to get started, unless of course they signed with the record company.