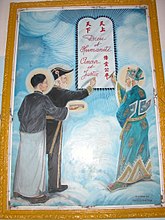 Đạo Cao Đài, or Cao Dai in English (full name Đại Đạo Tam Kỳ Phổ Độ), is a Vietnamese syncretic religion, and the third largest in the country with over 7 million followers.[1] Their god's full name is Cao Đài Tiên Ông Đại Bồ Tát Ma-ha-tát, usually abbreviated Đức Cao Đài. Caodaists believe theirs is the Third Revelation of God: the First being Judaism, Hinduism, and Yi king; and the Second being Buddhism, Confucianism, Christianity, and Taoism (sorry Islam). It is also strongly influenced by Spiritualism (Spiritism) with its belief in seances as a method of communicating religious doctrine.

Their chief prophet is Ngo Van Chieu, a civil servant who was the first to receive messages from Đức Cao Đài, ushering in the period of contact with the divine known as the Third Revelation, in 1926. The religion was formally established as Đại Đạo Tam Kỳ Phổ Độ (The Third Great Universal Religious Amnesty) that year, out of various small groups and sects who had been practising spiritualist techniques and receiving messages. It became popular over succeeding decades, supporting Vietnamese nationalism but generally taking a moderate position about negotiation with the French. Vietnamese communists were hostile to it for many years but have now relaxed their opposition.[2]

Because of their syncretic nature and their belief in the validity of previous revelations, Caodaists pray not only to Đức Cao Đài but also to Buddha, Jesus Christ, Lao Tzu, Confucius, and Khuong Thai Cong, who represents Geniism (a Vietnamese folk religion also incorporated into Cao Dai).

Cao Dai distinguishes different levels of holiness. The top level is God, Buddha, and those who have Buddha-like status. The next level is the Immortals, which includes Confucius. The next level is the saints, among which are William Shakespeare, Victor Hugo, Joan of Arc, Louis Pasteur, Thomas Jefferson, Sun Yat-sen (the revolutionary father of Chinese republicanism),[3] and Lenin (which is ironic, as Caodaists were persecuted by the communist government from 1975-1997[1]).[4] The three most important saints are Victor Hugo, Sun Yat-sen, and Nguyễn Bỉnh Khiêm. Cao Đài has two main sects: exoterists, who simply follow Cao Đài, and esoterists, who are basically monks of Cao Đài.

The syncretism of Cao Đài underlies their belief that all religions teach the same thing, and their goal of promoting religious harmony. Caodaists also believe in reincarnation similar to Buddhism, the existence of a soul which contains both the human soul and part of God's spirit, and the effects of Karma on future lives. Though they claim full equality for men and women,[4] women are not allowed above the rank of cardinal (Cao Đài clergy mimic the Roman Catholic Church in terms of titles).[1]

This religion-related article is a stub.
You can help RationalWiki by expanding it.
Retrieved from "https://rationalwiki.org/w/index.php?title=Cao_Dai&oldid=2440908"
Categories:
Hidden categories: