From RationalWiki
(Redirected from Confucianism)
Jump to navigation Jump to search 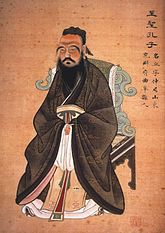 Confucianism is sometimes identified as a religion, and the existence of temples to Confucius in China and other East Asian countries would seem to support this.[1] However, in contrast to conventional Western ideas about religion, Confucianism does not explicitly contain concepts such as supernatural explanations, a specific belief in the afterlife (see Lúnyǔ (论语) 11:11)[2] or holy rituals, and is equally compatible with religious beliefs such as Daoism, Buddhism and Shinto, or with secular world views such as communism; indeed, it could be argued that the five constant virtues of Confucianism, namely: benevolence, righteousness, propriety, wisdom, and loyalty make Confucianism quite compatible with, or even a version of, humanism. Thus it's probably best to think of Confucianism as less a belief system unto itself and more a simple code of behavior that can be added onto any pre-existing beliefs you might have. Maoism is sometimes interpreted as a blend of Marxism and Confucianism.

Traditionally, Confucianism sees practicing religion as beneficial to society. Confucianism exists in the context of a long tradition of Chinese folk religion that regards deceased family members as the most accessible functionaries in a vast celestial bureaucracy, and Confucius himself, as well as later Confucian thinkers, encouraged participation in folk religious practices. The concept of "ritual propriety" (lǐ (礼)), meaning that an individual's interactions are following traditional mores, was cited as the most important virtue by the Confucian thinker Xúnzǐ (荀子) (313-238 BCE). This emphasis causes Confucianism to trend strongly conservative, and so traditional Confucianism greatly encourages religious practice. More modern thinkers who have been heavily influenced by Maoism frequently reject religion, but as Confucianism itself makes no explicitly supernatural claims this rejection is still generally considered orthodox.