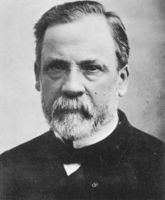 Louis Pasteur (1822–1895) was one of the great French scientists, famous for his work with curing rabies and developing the idea of vaccination. He also championed the radical idea that dirty hands, clothes and instruments in hospitals contributed to the spread of disease, and basically demonstrated the germ theory of disease to be correct, although not in every case.[1]

All in all, he was about as practical a scientist as one could possibly be, a brilliant man to whom millions of people owe their lives and one who it can truly be said made a difference in the lot of nearly all people alive today.[3]

That said, there are still those who consider vaccination and pasteurisation to be the work of the devil (or at least a big agribusiness conspiracy), although these processes have saved countless lives over the years.[note 1] Vaccine denialism and germ theory denialism still flourish today in spite of mountains of scientific evidence as to their efficacy.

Pasteurisation, the process of heating/cooling food to kill germs, was also an idea that began with Pasteur (hence its name). In much of the food industry, particularly the dairy industry, it is considered one of the most important front-line sanitation procedures.

It is not so popular with certain food faddists, who believe that pasteurization destroys the nutrition of milk, honey, and juice. Such is it ever with those with short memories of harder times.

Pasteurization does have the drawback that, as it's a heat treatment, it destroys those vitamins that break down when heated. For that reason, pasteurized milk is usually sold with Vitamin D and vitamin A enrichment. It does not, however, destroy macronutrients — proteins, fats, and carbohydrates. If a food item is heated so hot that its macronutrients are damaged, we don't call it pasteurization, we call it burning.