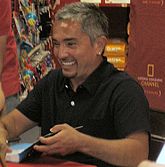 Cesar Millan (1969–) is a Mexican-American dog trainer best known for his 2004-2012 National Geographic TV show Dog Whisperer with Cesar Millan, where he helps dog owners with problematic dogs. This is a fine recipe for an infotainment show; owning a dog can be a difficult responsibility. There are two problems with this particular show, however. Firstly, Millan's methods are simplistic and outdated. Secondly, Millan supports various forms of woo; in a number of episodes he "treats" dogs with homeopathic preparations and acupuncture sessions, and he talks about people's auras a number of times, and almost every episode features Millan babbling about the energy people and dogs give off.

The core of Millan's method is that dogs have three primary needs: exercise, discipline and affection (in that order) and that owners should be "calm-assertive" pack leaders. Millan traces most dog behaviour problems back to a lack of "calm-assertive energy", which is really Millan-speak for lack of discipline or dominance.[5] While it's certainly true that some problems may stem from this, just like in humans, behaviour problems in dogs can have a multitude of sources. In many ways, Millan is a "one-trick dog". Millan's methods seem to be stuck in the 1980s, and are based on a number of misconceptions about dogs.[1]

Millan uses confrontational methods to assert dominance such as jabbing the dog (which he calls a "touch"), choke collars, forcibly holding the dog down, and overwhelming the animal with the thing it fears. While this is not as bad as hitting the dog, using whips or even cattle prods (which some trainers still use!), there is an almost complete lack of positive reinforcement.[6]

If you're thinking "but Millan's methods seem effective enough", then consider that you're only seeing half an hour of the dog in a highly edited TV show and only see the dog over the course of a short period of time. Perhaps more important is the question whether Millan's methods are more or less effective compared to conventional methods?

Millan is self-taught; nothing wrong with this as such. However, as with many autodidacts, after he established his own line of reasoning, he seems rather impervious to criticism of this reasoning. So it seems to have improved little over time. At one point, Millan simply asserted, "some people don't like me. I know I'm doing good."[2] Well, that's a nice way to deflect any criticism.

Malcolm Gladwell, who spent some time with Millan and watched unedited versions of episodes, pointed out that the controversial bits of Millan's methods are only a small part of his methods.[7] This may very well be true, but these methods are still the focus of both the TV show as well as Millan's books; it's still spreading misinformation, and whatever Millan does off-screen changes nothing.