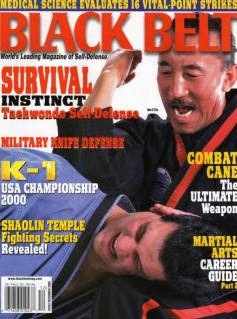 Sadly, it's as sensationalist as it looks...

Black Belt Magazine is a magazine dedicated to covering various martial arts, and, along with Soldier of Fortune, is a mall-ninja favorite. It's infamous for heavy advocacy of martial arts woo, an often highly-unrealistic approach to combat, and oftentimes a complete disregard of the legal ramifications of using many of the techniques they endorse. Their advertising section could accurately be described as a catalog of every McDojo in existence combined with every crank idea in martial arts; looking as if Deepak Chopra and some random Internet tough guy joined forces and published the material.

Started in 1961 by Mitoshi Uyehara, it initially focused mainly on Japanese martial arts, but over the years it expanded its focus to other martial arts, although the major trend was on whatever martial art was popular at the time: kung fu in the 70s, karate in the 80s, and (begrudgingly) mixed-martial arts in the mid 2000s. Several well-known and respected martial artists contributed to the magazine over the years: Bruce Lee, Bill Wallace, Chuck Norris (great martial artist; completely bat-shit on everything else), etc. 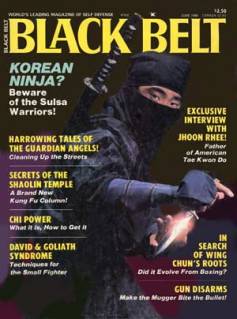 We're sure this is a historically accurate depiction of a ninja

They also have a history of exploiting the crap out of the more sensationalist aspects surrounding martial arts. During the ninja craze of the 70s and 80s, the magazine devoted an obscene amount of space to bad advertisements featuring stereotypical, bad Hollywood ninja supplies[1] that were completely devoid of any historical accuracy. Several contributors, such as Frank Dux[2] and Steven Hayes[3], have made dubious claims that are rather lacking in evidence outside of their personal claims of being true.

To top it off, they give far too much credit to crank martial artists and the theories they espouse. (We're looking at you, George Dillman.[4]) 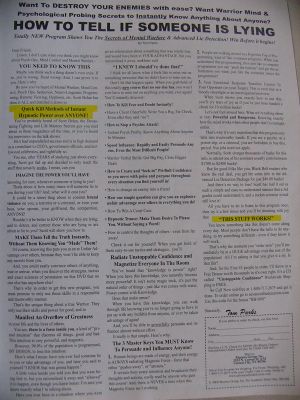 Lie detection... and overpowering folks with the power of your voice?

By far, their biggest crime is the all-out, out-and-out blatant woo and McDojo-peddling the advertisement sections spit out. 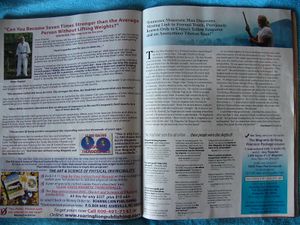 Magnet chi... how does that work?

Literally every known form of woo surrounding the martial arts (including several forms you didn't even know existed) can be found here. There are several ones ranging from bullshit surrounding Qi/chi, to various New Age claims (mixed in with their completely unrelated martial art of choice), to mind control techniques straight out of The Men Who Stare at Goats. There is also a heavy emphasis on bodybuilding woo: broscience is commonplace and claims to be able to gain "better abs than Bruce Lee" in a matter of weeks are sadly the norm. Then there are individuals that crank up their outrageous claims to 11. One such individual is Peter Ragnar,[5] whose claims have to be seen to truly be believed.[6] Claims of superhuman strength achieved by chi, that can only be accessed with his overpriced magnets (how this is possible is never explained), and a unique take on breatharianism set him in a category of his own. Needless to say, Ragnar takes the concept of not even wrong to staggering and frightening new heights.

There also is a disturbing number of McDojos that proceed to advertise their dangerously ineffective martial art "schools." Dubious claims such as the ability to defeat anyone regardless of size, strength, or martial prowess; as well as schools promising to teach moves that can kill people in a street fight (typically with weapons you'll never have in a street fight or techniques that will land you in prison if used in anything other than a life-or-death situation) are rife.

To be fair, however, there are several ads for legitimate schools and martial arts gear, such as gis and protective wear, so not all of it is bogus. 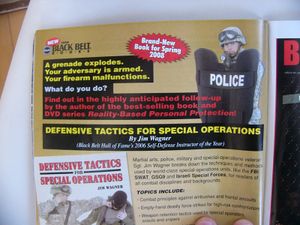 The magazine has been criticized for an unrealistic approach to actual combat by martial artists (although this is highly subjective outside of the context of McDojos). It often shows articles containing situations most people will never be in (gunfight, warzone, etc). This wouldn't be a problem if it was simply being presented as a hypothetical situation, or was presented as just an educational article (which, to their credit, they often do). However, as the advertisement to the left shows, the authors often present said situations as something that is almost a mathematical certainty.

The articles written on "reality based systems" are particularly guilty of this, taking on an almost survivalist tone. Unfortunately, oftentimes the techniques shown in the magazine from these systems are totally useless to anyone who isn't a Navy SEAL or member of a SWAT team. Your typical 16-year-old bullying victim or karate hobbyist will never be in a situation where they'll be forced to disarm a goon wielding a knife or handgun, let alone a fucking assault rifle or hand grenade. In full unintentional irony, the magazine's presentations of reality-based systems have presented the most unrealistic scenarios possible. Unsurprisingly, (especially considering the magazine's history of doing no fact-checking) there are a number of reality-based instructors of ill repute (such as Moni Aizik

[7]) whom Black Belt writes about enthusiastically, continuing the cycle of destroying what little journalistic integrity they still have.

But is it complete garbage?[edit]

Unless you're into buying faux ninja swords; in which case you'll be in heaven.