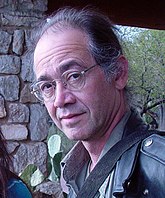 Charles Carreon is a lawyer living in Tucson, Arizona with his wife, Tara. His claim to fame prior to 2012 was as a First Amendment champion in the Sex.com case.[1] In 2012 he has become known for being a frivolous litigant and censorious butthurt nutcake after attempting to shake down Matt Inman, owner of webcomic site TheOatmeal.com, for $20,000 because of complaints Inman made about his work being illegally hosted on FunnyJunk.com, an aggregator of user-submitted "funny" content. Inman told him to fuck off and instead raised 200 grand via crowdfunding to donate to the American Cancer Society and the American Wildlife Federation; Carreon's response was to file suit against Inman, Indiegogo, and both the organizations Inman donated to.

As of September 2013, sanity seems to have prevailed and he's failed to interest Wikipedia editors since.[2][3]

Expert PR skills at work.
The case began in 2011 when Inman made a complaint[4] about image-hosting crap-site FunnyJunk stealing Inman's images - FunnyJunk being a website notorious for that sort of thing. FunnyJunk responded[5] with about as much maturity and decency as one might expect from a site where the entire business model is to slather advertising all over copyrighted content. A brief flame-war between the two sites would have been an end to it until Carreon got involved a year later. Representing FunnyJunk, Carreon threatened to sue Inman for defamation (for not updating his blog post from a full year earlier to reflect that FunnyJunk had taken down the many specific uploads he had listed) and attempted a $20,000 shakedown to make the problem go away. Inman's first response[6] is best summed up as follows:

You want ME to pay YOU $20,000 for hosting MY unlicensed comics on YOUR shitty website for the last three years? No, I've got a better idea. 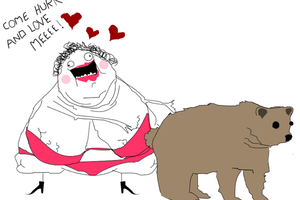 Inman's "Operation Bear-Love Good Cancer Bad" campaign raised the $20,000 in 64 minutes, and had netted over $100,000 by the end of the first day. Despite his earlier experience with the Sex.com case, Charles seems to not have spent much time on the Internet, as he was bewildered by Inman's tactics.[7] Carreon foreshadowed the clusterfuck of hilarity and butthurt that was to come in a quote given to Digital Life:

"I really did not expect that he would marshal an army of people who would besiege my website and send me a string of obscene emails," he says.

"I'm completely unfamiliar really with this style of responding to a legal threat — I've never really seen it before," Carreon explains. "I don't like seeing anyone referring to my mother as a sexual deviant," he added, referencing the drawing Inman posted.

The fact that Inman's letter was clearly directed to FunnyJunk and not Carreon himself is something Charles seems to have missed. He also falsely accused Inman of directing fans to contact Carreon – he seems to have never considered that the Internet might have risen up to smack him in the face on its own initiative without needing to be directed. (In fact, Inman later asked people not to contact or harass Carreon.) Curiously, this is the very tactic that Carreon's client, FunnyJunk, did about a year before.

At this point, the FunnyJunk aspect of the case was almost forgotten, and Carreon went pro se (aka, representing himself) and fucking nuts. Through the course of Carreon's legal complaints, the following were sued in one way or another:[8]

Carreon dropped the case by the beginning of July, declaring "Mission Accomplished" before the judge could actually act on it and determine how many times he'd be hit with the Rule 11 stick (which is to say, fines for knowingly bringing a lawsuit that has no basis in law when he should've known better) and disbarment from the California bar.[10]

The tastefully-named Rapeutation.com is a website started by Carreon and his wife in 2012. The initial post was a bizarre Christmas-themed (in the middle of July) music video called "Psycho Santa." The video[11] is said to be related to the controversy, but the Carreons seem to use the Timecube approach to context, sanity, and relevance in their posts,[12] not to mention the fact that Tara Carreon apparently wants to "get rid of you ALL if I could. I wouldn't leave a one of you," referring to men[13] — except Carreon himself, presumably.

In addition to the strange video, Rapeutation includes calls for substantial expansion of US defamation law for the "social media" era. Carreon defines a new acronym called "Distributed Internet Reputational Attack (DIRA)" and writes a rambling "legal analysis" calling for oppressive, litigious tools to be brought to bear on any criticism issued over the internet.[14] Because when your outrage is irreparable, invent legislation to sue for it instead of ignoring it.

In September 2013 he had a sudden attack of sanity and dropped the remaining lawsuit, calling his entire legal battle "a dumb thing".[2]