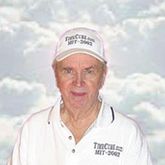 Ray has his head in the clouds. Literally.

Dr.[2] Otis Eugene "Gene" Ray (1927–2015)[3] was a former electrician and inventor who actively promoted the game of marbles.[4] Sometime after losing his own, he created the idea and the website for Time Cube in August 1997. He proclaimed himself a Doctor of Cubism and Wisest Human in December 2002 and careened steadily downhill from then on.

Gene Ray was anti-Semitic,[5] homophobic,[6] racist,[7] and batshit crazy.[citation NOT needed] On this website, he promised $10,000 to Wikipedia, the first academic, or anyone who could refute the Time Cube theory, citing the wager at least 6 times on the main page. He was, of course, the only judge for that particular wager.

He spoke with the same incoherency displayed in his writing.[8] It's entirely possible he had actual medical brain damage, but the Internet has desensitized people to insanity on such a level that this is usually not considered.

Ray's sites went offline over July and August 2015; in 2010, he said he was 82 and had cancer.[9] Ray died in 2015 at the age of 87.[3] However, the domain registration for timecube.com was renewed on 9 September 2015 under the name of a certain "Gene Ray", ensuring—at least at the time—that the world could know the proclamations of The Wisest Man on Earth. The site went down again in early 2016, seemingly for good. It can still be found on the Wayback Machine.

Time Cube is Ray's longest and main site. Both pages repeatedly state his assertions about "cubic time" and how the "educated stupid" are suppressing cubism. It takes a bit to get your head around.

Greatest Thinker espouses Ray's views on God a little more. This site contains perhaps his most coherent sentence to date; "God is the supreme excuse for human adults to absolve themselves of any obligation to preserve natural resources for their own children during their lifetime." As many antitheists could clearly agree on this sentiment, Gene Ray may well be a stopped clock from their point of view. While he doesn't even try to go into depth about this assertion, back it up, or clarify, it's notable for being one of the very few sentences (with more than 4 words) that actually make grammatical sense.

Ray's fourth site, Wisest Human merely states "The Wisest Human to Ever Live on Earth" with a link to Time Cube. Modest, isn't he?