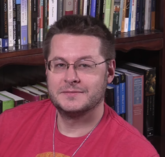 David Wood (1976–) is a Christian apologist, an evangelical missionary, and a loudspeaker against atheism and Islam. He is the head of the Acts 17 Apologetics Ministry, ran the now defunct website, AnsweringInfidels.com[1], and member of the Society of Christian Philosophers

and the Evangelical Philosopher Society

.[2] He claims that he used to be an atheist and was psychotic until he was saved by Jesus himself.

Wood started the now defunct apologetics website, AnsweringInfidels.com that was a response to the writers at Infidels.org. In their own words, they are dedicated to "refuting the arguments of the self-proclaimed "infidels" of the Secular Web."[1]

In 2005, Wood wrote a long and rambling polemic against historian and atheist, Richard Carrier and his book Sense and Goodness Without God, called "Good 'n' Senseless Without God: A Critical Review of Richard Carrier's New Book, Sense & Goodness Without God".[3] Wood's work received massive criticism by Carrier himself in an essay called "On the Deceptions of David Wood", where he slammed Wood for being "a fine example of Christian bigotry" and that his work was "essentially a trash-talking diatribe, filled with open disdain and lack of manners or respect, entirely founded on misrepresenting the facts."[4] David Wood replied to Carrier's criticism in a rather arrogant manner.[5]

Wood, and his wife, Marie, who was an agnostic until she was converted to Christianity, also posted articles on their blogger website.[6]

Wood currently runs a YouTube channel with the same name as his ministry, Acts17apologists, which as of August 2018, has over 250,000 subscribers and over 61 million views.[7] Wood's most popular video on his Acts17Apologetic's YouTube channel is called "Why I am a Christian"[8]

This christianity-related article is a stub.
You can help RationalWiki by expanding it.
Retrieved from "https://rationalwiki.org/w/index.php?title=David_Wood&oldid=2134729"
Categories:
Hidden category: