From RationalWiki
(Redirected from Chick-Fil-A)
Jump to: navigation, search 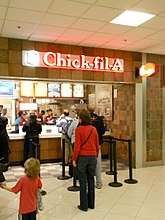 This picture was taken in December 2011, so the people in it are not necessarily opposed to gay marriage.

Chick-fil-A is a American fast food restaurant chain. In July 2012, the company's owners were called out for having close ties to anti-gay organizations throughout the United States.[1] The company was founded by deeply religious Southerners, and the restaurants are closed on Sunday.[2] Their chicken is pretty tasty, as is their lemonade, and their restaurants tend to be well-kept and they provide good pay and benefits to the workers. Chick-fil-A is also known for its silly advertisements featuring cows attempting to convince people to eat more chicken. They're dairy cows so they don't need to worry about becoming burgers, but it's good for them to be showing solidarity with their fellow bovines.

In July 2012 the company's COO, Dan Cathy, went on the record with his and his company's opposition to gay marriage, based on his firm belief in the (probably whitewashed) Biblical definition of marriage and implying that people who refuse to let religious fanatics tell them what to do are "prideful and arrogant".

Municipal politicians in both Chicago and Boston expressed the desire to block the company's expansion in their cities (which, unfortunately, gave ammunition to those trying to frame the issue as "free speech" rather than bigotry).

On 1 August 2012 activists running the gamut of the political spectrum, from "Isn't it nice that we have something that gay people don't?" to "Isn't it too bad that there are laws against beating gays to death?" flooded their local Chick-fil-A to eat a tasty sandwich and to show their support for Cathy's stance in an event which Mike Huckabee dubbed "Chick-Fil-A Appreciation Day". In response, gays and their supporters held a less-popular but relatively uncontroversial "Same Sex Kiss at Chick-fil-A" day on 3 August 2012.[3]

The internet and social media responded to the news quite vigorously, despite attempts from the company to backpedal on Cathy's statements. Image-sharing sites were flooded with photographs of the heavy crowds on 1 August 2012 as well as images of the signature Chick-fil-A billboard cows erroneously defending Cathy's statements as a First Amendment issue[4] or comparing the company to the Westboro Baptist Church.[5]. Blogging sites and forums revealed the misunderstanding of many Americans who believed that calls to boycott the restaurant were because of Cathy's statements when in fact they were responses to the many charitable donations that Chick-fil-A had made to anti-gay/"marriage protection" groups.[6]

One popular meme among forums was that those who supported Chick-fil-A weren't actually engaging in activism, but simply contributing to the company's bottom line as well as their own bottoms. Another observation pointed out that Jesus would have preferred that people feed the needy and the hungry rather than engage in one's own gluttony.

Suddenly the center of attention[edit]

A few days after Cathy's statements, in a fashion reminiscent of Kenneth Lay, Chick-fil-A's PR executive was struck down unexpectedly died of was summoned to the side of the Lord through natural causes.[7] Some grave-dancing occurred, but not in the same volume as occurred when, say, Christopher Hitchens died.

A wrongful-firing suit was filed against Chick-fil-A by a woman who was fired so that she could be a "stay-at-home mother".[8]

In response to Cathy's statements, the Jim Henson Company backed out of an upcoming promotional deal, stating quite unambiguously that they could not continue their relationship with Chick-fil-A based on their anti-gay stance, and donating the money they had received from Chick-fil-A to the gay rights support group GLAAD.[9] Chick-fil-A, however, related to their customers that the cancelled promotion was due to a "safety issue" with their toys.[10]

Additionally, within days of Cathy's statements a Facebook account for one "Abby Farle" began actively defending Chick-fil-A and citing Bible verses on the company's Facebook page. Some savvy users pointed out that the account was only a few days old and that the profile picture was a ShutterStock stock photo. The account later disappeared into Facebook oblivion and accusations of sock puppetry became widespread.[11]

As early as a week after everyone had their fill of homophobic chicken, a majority of individual Americans still regarded Chick-fil-A favorably,[12] despite calls for a boycott. The company's brand index (a metric used by marketing agencies to score popularity and exposure among businesses and consumers), however, did not fare so well, as economists and business experts have come to recognize the financial risks with openly supporting an ideology that alienates a large portion of its potential consumer-base.[13]