Enron Corporation was an energy and commodities trading company that is now synonymous with the words "fraud," "rip-off," "corruption," "epic fail," and "holy shit these guys are crooked!" It may also be used as a verb, as in: "We cooked the books, took our bonuses, and got the hell out of Dodge — you know, Enronned 'em."

Kenneth "Kenny Boy" Lay
In the 1980s, an Omaha-based company called InterNorth merged with Houston Natural Gas to become InterNorth/HNG. InterNorth also dealt in natural gas and owned various subsidiaries that created derivative products used in the production of packaging and plastics. The CEO of InterNorth/HNG retired, allowing Ken Lay to ascend to power in 1985. Lay swiftly broke his first promise to keep InterNorth/HNG based in Omaha and moved it to Houston, where he rebranded the company as "Enteron." When someone notified him that he had inadvertently named his company after a medical term for "intestinal tract," Lay renamed the company to "Enron." "Enrot" or especially "Enrob" would have either been far more appropriate, in view of the subsequent history of the firm.

A confluence of three events laid the groundwork for the mind-boggling web of financial bullshit that Lay and his cronies would weave. Almost immediately, Enron began to tank under Lay, causing him to start selling off a good number of the company's vast network of gas plants and pipelines. While he pawned off his company's assets, the Reagan administration happened to be holding the hearings commissioned by the Task Force on Regulatory Relief, headed by Phil Gramm's wife Wendy. Lay, a Ph.D. in economics, preached the Gospel of Deregulation at the hearings, which ultimately resulted in the government lifting regulations on the energy market. By 1987, the market had begun to work its magic, at least for Enron's Valhalla, New York-based branch. While most Enron subsidiaries were just scraping by or losing money, Valhalla was rolling in the dough.

Two of the top traders, Louis Borget and Tom Mastroeni, were making their money by trading large amounts of gas futures, or gambling in common parlance. They skimmed money off the top of the profits by laundering it through foreign accounts. However, Enron's auditors detected fraud in their actions, and Borget and Mastroeni were summoned to Houston. In Houston, Lay decided to let them continue their trading, as he needed their profits to keep the company afloat. One of the auditors went so far as to track down the traders and make a death threat against them that ultimately resulted in them fessing up by releasing some documents they had sat on. An SEC suit followed and Mastroeni got the boot with a steep fine and Borget ended up in the slammer. Lay denied knowledge of the incident.

The next generation of swindlers[edit] 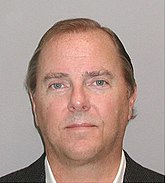 Jeffrey "I'm fucking smart!" Skilling
Lay managed to secure subsidies from the new president George H.W. Bush, whom he had buddied up with during the days of the Task Force on Regulatory Relief while Papa Bush was still VP. However, Enron had taken a severe hit in the wake of losing Borget and Mastroeni, the market crash of 1987, and the ensuing Savings and Loan Crisis. Lay needed "ideas men," so he brought two young guns on board in the early '90s: Jeff Skilling and Andy Fastow.

Skilling's favorite book was The Selfish Gene by Richard Dawkins. He never got the memo that evolution does not equal Social Darwinism. Skilling restructured Enron in the mold of "survival of the fittest," making massive lay-offs of low-performing employees and introducing mark-to-market accounting, which allowed future profits to be booked immediately after a deal was made. Skilling thought this "rank-and-yank" system would motivate employees.

Enron took off. While it secured contracts for power plants in England and India, its big bucks were rolling in from the energy traders. Skilling had essentially replicated the Valhalla branch and turned Enron's financial branch into a sort of stock market for energy speculation. Naturally, a lot of these mark-to-market deals went down in flames. In 1993, Enron created the Joint Energy Development Investment Limited (JEDI), which was a pension fund that bought Enron assets. Fastow came up with a brilliant "innovation" to take the debt off Enron's books: Special Purpose Entities (SPEs, or dummy corporations in non-bullshit-ese). One of the biggest of these was Chewco (named after Chewbacca), which bought up debt from Enron through JEDI. Fastow spun off a huge number of dummy corporations — LJM, the Raptors, Osprey, Whitewing, etc.[1] This network of dummy corporations pawned off Enron's stinky deals on Wall Street investment banks, kept debt off their books, and allowed Enron execs to skim cash off the top. Essentially, all the dummy corps were either dumping grounds for Enron's bullshit or pyramid schemes to keep the investments from Wall Street coming in.

Enron's multi-billion deal in India fell through when the government cancelled the contract, which they had of course booked the profits for years ago. Skilling and Fastow went into overdrive, adding epicycle on epicycle, piling bullshit on bullshit. Skilling decided making new products was for chumps and set up EnronOnline, a virtual stock market for energy and credit derivatives. This market was completely unregulated thanks to Phil Gramm's Commodity Futures Modernization Act of 2000, which contained the "Enron Loophole" allowing energy derivatives to be traded unchecked. Coincidentally, Wendy Gramm had landed a gig at Enron in the late '90s and Enron just happened to be one of Gramm's top campaign contributors. EnronOnline was hailed as a great new "innovation" as it came during the height of the dot com boom. In reality, Enron had completely fucked itself over by this point.

Enron execs realized they had gotten themselves into such deep shit that they would have to pull off a move of epic proportions. Their company's value had gone up 60% every year since 1996 and its stock was skyrocketing. This facade kept credit flowing into the pyramid scheme dummy corporations as well as getting them glowing reviews in business and finance rags to help boost their stock up even more. In the late '90s, Enron had lobbied California to deregulate its power grid, allowing Enron to buy up a number of power plants. The new scheme? Intentionally create blackouts to drive up energy prices! Tapes of phone conversations between Enron employees and plant workers leaked after Enron collapsed. They made some colorful comments...

After rolling blackouts became a common occurrence, California Governor Gray Davis smelled funny business and asked newly elected president George Bush to launch a federal investigation. Dubya blew him off. Due to Lay's connections with Bush the Elder, he happened to be pals with Dubya as well, who referred to him as "Kenny Boy." Lay happened to be on Dubya's shortlist for Secretary of Energy. Dick Cheney's Energy Task Force also helped block regulations that would have applied to Enron.

When it became apparent that even the California screw-job couldn't save them, Skilling cashed out his stocks and jumped ship. Lay and Fastow tried to keep the pyramid schemes feeding into the massive pump and dump scheme going. Lay went into a paranoiac mania after seemingly drinking too much of his own Kool-Aid, hyping Enron stock to employees and outsiders alike, reassuring investors "the fundamentals were sound," writing op-eds extolling the free market as the savior of mankind, and comparing those asking to see the company's balance sheets to 9/11 hijackers. Meanwhile, Lay and Fastow were pawning off their stock and shredding documentation knowing the ship was going down.

Enron finally collapsed under the weight of its debt, greed, and stupidity in December of 2001, making it the biggest bankruptcy in American history at the time. One Enron exec committed suicide to avoid facing charges. Lay was indicted but died before he was sentenced. Fastow was released from prison on December 16, 2011, having served a term of nearly six years, and now works as a document review clerk for a law firm in Houston, Texas.[3] Skilling served 14 years in federal prison before being released in 2019.[4] Arthur Andersen, one of America's prestigious Big Five

accounting firms, lost its CPA license and is barely alive, even after a Supreme Court ruling vacated Anderson's felony conviction.[5] Former Enron employees won multi-million dollar lawsuits to get their pensions repaid, but Enron blew billions of dollars in sum, so tons of people still got screwed. Due to Enron as well as a number of other accounting scandals, like Tyco and Worldcom, the Sarbanes-Oxley Bill was passed to limit this sort of fraud. Apparently it didn't do a whole lot.

Enron also gave out its own worthless award, the Enron Prize for Distinguished Public Service. The honor roll included:[6]

Only two of these men deserved the award.