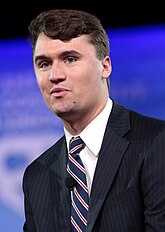 If you don’t like this RationalWiki article, why don’t you move to Venezuela?

Charlie "Chuckles" Kirk (1993–)[2] is an American right-wing grifter, trustfund baby, professional meme maker, and diaper enthusiast. He is the founder and spiritual leader of Toilet Paper USA Talking Points USA Turning Point USA (TPUSA), which organizes bizarre conservative stunts on college campuses and (according to an exposé at the conservative leaning Washington Examiner) has a long history of teen underage drinking and rape at its student conventions.[3] Kirk is also known for cameoing as the spokesperson for the fictional restaurant Li'l Bits in an episode of Rick and Morty.[4]

TPUSA claim that they're a "youth organization that promotes the principles of fiscal responsibility, free markets, and limited government," when in reality, they're just a right-wing echo chamber for dying boomers and edgy white boys that takes any chance they can get to insult socialists and anyone left of Henry Kissinger. Most of their Twitter feed consists of calling out socialists for being "hypocrites"[5] (because apparently using an iPhone and buying things to survive instead of living in a cavemen commune invalidates all your left-leaning arguments), complaining about leftist propaganda in the curriculum,[6] making antisemitic and/or rape jokes,[7] preying on naive first year college students instead of debating professionals, pundits and experts, sharing terrible memes, et cetera.

Charlie Kirk was born into a wealthy Illinois family. His father, Robert W. Kirk, was the project architect manager for Trump Tower in New York. Charlie became politically active after Barack Obama became President. In 2010, he joined the Tea Party and volunteered for the US Senate campaign of Illinois Republican Mark Kirk (no relation). In 2012, he wrote his first piece for Breitbart complaining about "liberal bias" in high school economics textbooks.[11] Despite being promoted as "Trump's man on campus",[12] Kirk actually dropped out of community college; he was allegedly rejected from Vienna's Academy of Fine Arts West Point, and blamed it (without any evidence)[13] on affirmative action.[14] Because of course.

Kirk, who is an evangelical Christian, believes that atheism leads to socialism, as men attempt to fashion themselves into Gods:

For some individuals it's more real than God, which I think is preposterous, but, as a society gets more secular, unfortunately with it goes its moral conduct and behavior. Now, I am a fierce proponent of the separation between church and state, I think it's actually been positive for Christianity in the United States, I think that the less government has endorsed state-run religion, the more the church has been able to succeed, as long as our religious liberties are intact, preserved, and protected. The point being, is that if you try and have a theocracy like some of the European countries did in the 50's and 60's or the 20's and 30's, people inherently try and rebel against it, so for example, Spain had that huge argument, "Should we become a pseudo Roman Catholic state?" and that kind of started a little bit of a conflict, a little bit. Um, the point being is that the protection of the — uh, individual liberties is super important, but looking holistically, you — there, there's a coincidence — there's no coincidence, there's no argument that one of the reasons behind the rampant, um, escalation of I would say immoral behavior in a lot of these countries, in North Korea or China and the former Soviet Union, is that when you remove God and you say there is no God, government replaces that and the reason is, motivational leaders want to create themselves to be a God-king. And that's, that's what Mao tried to do, Mao was revered as, as a God in China, and Stalin was revered as a God, and there's nothing more evil than that, a human being trying to become a deity, in and of itself. So I am a harsh critic against the American atheist movement for a lot of different reasons. Um, mostly because I say, how could you possibly be so certain? Like, like if you're agnostic, I get it. Like, I understand you're searching for answers, you're always open minded. But an atheist, like, they're so committed to knowing that there's no God? You believe in nothing. And so when you have nothing there's all of these questions that automatically come: Where does your moral conduct come from? What is our point of origination? Are we good or bad by nature? So as an Evangelical Christian I'm very, very worried that as [a] society we get more — we get farther and farther away from our, our Judeo-Christian beliefs that really created Western civilization, there's a reason why the USSR, the alcoholism, the infidelity, and the rampant immoral behavior was so widespread, because when you remove God, I would also argue that, uh, with it you remove the core set of morals that helped create the West.[15]

In short, Kirk blames much moral failure in communist countries on atheism. Of course, he excludes the highly-irreligious countries like Japan, Sweden, and the UK that do not appear to have collapsed amidst their own immorality. He also seems to have missed that former communist countries which have embraced religion (particularly Russia) haven't become more moral as a result. Elsewhere, Kirk has separated "secular" from "Western democracies":

There are four competing global philosophies that will determine the 21st century:

This is deeply ironic, given the history of increasing secularism within the West for almost half a millennium, usually by pro-democracy advocates – a history that Kirk himself acknowledges:

The Constitution of the United States of America is the single most important secular document ever written.[17]

Given his love for tired talking points, it is unsurprising that Kirk also really likes the "not enough faith" line of thought, probably because it sounds clever:

I don't have enough faith to be an atheist[15]

Of all the religions, the hardest one for me to believe that people believe is atheism[19]

The amount of blind faith it takes to be an Atheist [sic] never ceases to amaze me.[20]

Like most Christian conservatives, Kirk understands how essential it is for us as a society to understand and accept science. Except when it comes to climate change and religion.[21]

Charlie Kirk made fallacious claims about the family of Candace Owens. Kirk claimed that "both" of Owens' parents were alcoholics and also claimed that "her sisters" were on welfare.[22] Owens later debunked his claims about her family on Twitter.[23] However, instead of calling out Charlie Kirk for his racially charged lies, Owens decided to denounce the "sadistic" journalism that pointed out his blatant dishonesty (so basically she attacked journalists for doing their jobs).[24]

isn't racist[25] for tweeting about Obama aide Valerie Jarrett: "muslim brotherhood & planet of the apes had a baby=vj". Definitely no racism there.

Kirk praised Kanye West for becoming an incoherent Trump fanboy politically active, but later he criticized Taylor Swift for endorsing Tennessee Democrats Phil Bredesen and Jim Cooper, and told her to stay away from politics.[26]

Also, Kirk praised Trump for signing a pardon for someone sentenced for doing drugs, but he attacked Barack Obama for pardoning 330 federal inmates convicted of drug charges.[27]

announced that Charlie had thrown out his back and a had a potential blood clot, and that the hospital made Charlie lay on a bench outside the hospital as they had run out of beds.[29] Ironically, despite getting screwed over by the American healthcare system, Charlie Kirk firmly believes the United States has the best healthcare system in the world[30] and that healthcare isn't a right.[31] Later, Charlie stated that he had visited a chiropractor who he claimed had made "my spine go back into line" by doing "some very targeted treatment right behind my ear with his hands".[32]

Oh, and he also can't spell "socialism" correctly.[34][35] That's what happens when you don't graduate from college![36]

Charlie Kirk has basically lost all credibility at this point.[37]

Kirk (most likely accidentally) stated that it was an injustice for Mack Beggs (a FTM trans boy) to be prevented from competing in the boys' wrestling league because of his birth sex (he was assigned female at birth but underwent gender confirmation surgery to become a man).[69] Charlie Kirk has a definite stopped clock moment in his opposition to the death penalty. He says it is more expensive than life in prison and says innocent people are executed. [70][71]

Obvious Photoshop, his face looks bigger than it actually is

Turning Point USA,[72] Charlie's pet project, is an astroturf nonprofit funded by the Koch brothers in order to make boring old conservatism look cool and appealing to millennials by sharing/posting/reposting cringeworthy memes and image macros. These images consist mostly of inspirational quotes by great conservative thinkers, such as Ronald Reagan, Ben Shapiro, Tomato Larynx, and, obviously, Chairman Kirk himself, but also by filthy commies such as George Orwell and Nelson Mandela (taken wildly out of context, of course). Their other favorite template is Top Panel: Liberal Quote (i.e. "Capitalism is bad." —Bernie Sanders), Bottom Panel: TPUSA's Response ("Then why don't you move to North Korea? Also, socialism has killed 100 billion iPhones"), accompanied by a picture of Charlie Kirk or a smug/confused-looking stock photo model wearing lensless glasses (because that's what dem youngsters wear these days). Along with hashtags such as #BigGovSucks, #SocialismSucks, #iHeartCapitalism, and #iHeartFossilFuels.

Turning Point's attempted launch in the UK (Turning Point UK) has not gotten off to a smooth start, as an immediate influx of parody accounts attributing ludicrous ancap ideas to the organization popped up almost instantly and were often indistinguishable from the real thing. [73]

Bill Montgomery, TPUSA's cofounder and Kirk's mentor, died in July 2020 of COVID-19 after months of downplaying it.[74]

Charlie Kirk loves freedom of speech so much, he came up with the idea of a so-called "free speech ball," an oversized beach ball for grade school college students to write whatever the hell they want to. With hilarious results.[76]

Another totally mature TPUSA stunt was their infamous 2017 "diaper protest," in which they dressed and acted as toddlers in order to protest against safe spaces,[77] at Kent State of all places. Not only did they lose funding and members after the incident,[78] but they also have been relentlessly mocked ever since.[79] Kirk himself, in a desperate attempt of damage control, disavowed the now defunct Kent State chapter of TPUSA.[80]

Of course, Charlie Kirk also believes that free speech should not apply to the left, so he started a very McCarthyist project called Professor Watchlist, whose stated mission is "to expose and document college professors who discriminate against conservative students and advance leftist propaganda in the classroom."[81] In reality, Professor Watchlist has resulted in over 100 cases of harassment (including death threats) against "leftist" professors.[82]

On October 2019, Kirk and Donald Trump, Jr. went to UCLA to promote Junior's latest piece of shit book titled — wait for it: Triggered: How the Left Thrives on Hate and Wants to Silence Us. Expecting to epicly own some easily triggered, blue-haired, antifa SJW communist snowflakes who hate freedom of speech, Don Jr. and Kirk were hilariously heckled off the stage... by a group of Trump supporters.[83] More specifically, by fans of the far-right YouTuber Nick Fuentes (known as "groypers", a reference to a grotesque version of Pepe the Frog). Fuentes, a white nationalist and Holocaust denier, has claimed that TPUSA, Dan Crenshaw, Ben Shapiro and other right-wing individuals and organizations are fake conservatives because they aren't fascist enough for his taste (maybe not, but damn, they're trying).

Turning Point Action, an affiliate of TPUSA, has been directing teenagers (including minors) to spread disinformation about COVID and mail-in ballots on Twitter and Facebook in an attempt to disrupt the 2020 election in favor of Trump. The campaign has been likened to a 'troll farm'.[84]