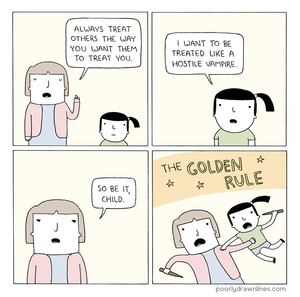 The Golden Rule is a moral idea that governs the basis of many codes of conduct throughout history. Put simply, it states that the most correct way to behave is to treat all others as one would want to be treated oneself.[note 1]

For example, you don't like to be stolen from, so you shouldn't steal from others. You wouldn't like to be murdered, so don't murder, and so on. It essentially rules out hypocrisy. Barring a few problems with certain types of individuals taking it too literally,[1] the Golden Rule is a quite effective and very simple formulation of a moral philosophy. It is cited by both religious and secular philosophies as a good principle by which to act.

The principle is found throughout history over a broad range of cultures as a guiding principle in the treatment of others.

There seems to be a tendency of Christians to suggest that the Golden Rule was first originated in the Bible, in the intention of tying the importance of Judeo-Christian morality as integral to Western civilization.[4] Unfortunately, reality doesn't work that way — it can be traced to (as early as) Babylon and Ancient Egypt,[5][6] and Confucius (as noted above) made mention of it several centuries BCE, though no Abrahamic faith is attested in China prior to the seventh[7] or eighth[8] century CE. The typical response to this is then an attempt to differentiate between "positive" and "negative" versions of the Golden Rule.[note 2]

One of the problems with the Golden Rule is that what an individual wants for themselves may not be what others want done to them.[9] An extreme masochist, for example, should be discouraged quite vehemently from ever following the Golden Rule too literally, as they would invariably end up torturing others in the population at large in the hope that it would give them as much pleasure. While an extreme example that is really just an abuse of the Golden Rule in letter rather than spirit, it's illustrative of the basic point.[note 3]

The idea is more subtly illustrated by the fable of a king who, in an act of kindness, travels to a poor serf's house with a large banquet. The king wishes to show his kindness and generosity towards the serf (who is, of course, baffled and annoyed by the intrusion) and sets out on the table the finest food in the kingdom. The serf stares at the finery, and is unimpressed. He tries some of the food, but dislikes its taste. The king grows increasingly angry, demanding to know why the serf is rejecting the greatest food in the land, but he can't quite get an answer. Finally, the king leaves in frustration and the serf returns to his thick and cheap broth. The moral of the fable is that the king doesn't understand the needs and desires of a man with a considerably different life to his own. The king projects his own desires — caviar, foie gras, and truffles — onto a man who has no desire for such things and hasn't been brought up to think that such things are valuable. Without such social conditioning, he views caviar and foie gras as things that taste disgusting[note 4] and truffles as just overpriced mushrooms.

The Golden Rule's main assumption, therefore, is that we not only know what is best for ourselves but happily project that view onto others. Only through understanding the generalities of the rule on a more meta-level, rather than applying specifics, can we truly use it as a moral guide.

In general, many agreements are difficult to reach on what should be universal. Two main contentious positions today pit against each other those who see process as the essence of universality and those who see ends as the ultimate determining factor: deontology vs. consequentialism.

The problems of hypocrisy and assumption — that evoking The Golden Rule might lead to it being all about you instead of taking the other guy into account — led to the idea of The Platinum Rule, which takes The Golden Rule one step further. Instead of treating others as you would like to be treated, The Platinum Rule says to treat others the way they want to be treated. Instead of making assumptions (such as the other guy liking truffles), you'd ask questions to find out what he likes.[10] After all, just because you like random strangers performing lewd acts on you in public places doesn't that you should do unto others as you would have them do unto you; instead, by asking questions, you learn what the other guy prefers. (Although it's probably not a good idea to approach a stranger on the street and ask if he'd like random lewd acts spontaneously performed on him... even if you ask nicely.)