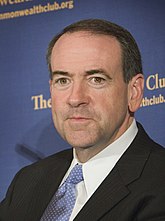 "Sir, the Nixonbot appears to be going critical!"

Michael Dale "Mike" "Bubba" "Hucksterbee"[2] Huckabee (1955–) is a former governor of the State of Arkansas, was a candidate for the 2008 United States presidential election, and jumped aboard the Clown Car once again in 2015.[3] He surprised everyone by winning the Iowa Republican caucus in 2008. He is a Baptist minister, and as a young earth creationist, rejects evolution, among other elements of modern science like gravity and math. One of Huckabee's greatest victories was losing over one hundred pounds, and then turning that energy towards making the kids of Arkansas healthier as well (Huckabee has since gained quite a bit of that weight back). In 2008, Huckabee polled first in the Iowa Caucuses, and third in the New Hampshire Primary. He stayed in the race even after the party coalesced around John McCain, claiming that he "majored in miracles, not in math" - which is probably not the best background for someone who's supposed to deal with a budget deficit or reality. He was also rumored to be a potential contender in 2012, but eventually decided that he liked his Fox News gig better after all. He did run again in 2016 but dropped out after an also-ran showing in the Iowa caucuses. He currently hosts a revival of his old Fox News show, Huckabee, on Trinity Broadcasting Network.

While Huckabee was Governor of Arkansas he was convinced by Rick Mercer, a Canadian comedian, to congratulate Canada on "preserving your national igloo". This was aired on the Canadian Broadcasting Channel's series Talking to Americans.[4]

Despite some reservations amongst the old guard of the religious right - who question Huckabee's economic populism - Huckabee became the favorite of the younger evangelical movement, who admire him for his open commitment to "Christian values" and their place in government.[5]

Given Huckabee's 2008 electoral success (he won in Iowa, and continued to get up to double-digit vote counts against the presumptive nominee McCain through the last of the primaries), though, it is necessary to reflect upon just what the success of this kind of candidate would mean for the rest of the United States of America. Namely, how much would Huckabee's religious vitality have affected a Huckabee presidency, and would it have affected it negatively?

The answers are "greatly" and "yes".[6] Huckabee has said openly that, in his mind, America must be under the rule of God: his God.[7]

In short, Huckabee advocates nothing short of theocracy.

He is not a man who uses religion to guide logical actions, or to inform a logical inquiry; he uses religion as the beginning and end of his political reasoning. For example, during his tenure as Arkansas Governor, Huckabee refused to sign disaster-relief legislation, for the mere reason that the legal boilerplate in the bill seemed to constitute a rhetorical slight to God. The machinery of Government ground to a halt, to stall a trifling offense to the Almighty.[8] Conduct on the campaign trail suggests that Huckabee's tendency to subordinate logic and governmental responsibilities to petty religious squabbles is undiminished - in August, Huckabee (then trailing in the polls) engaged in a very public and very personal religious squabble with the Religious Right's other darling, Sam Brownback.[9] Insofar as the cult of leadership requires one to rise above themselves to guide the nation, Mike Huckabee is no leader. He's also willing to threaten Christians with eternal damnation if they don't vote the way he wants them to, so he's no paragon of logic or reasoned debate with his (supposed) fellow-believers either.[10] Simply put, in terms of manners he's a complete dick.

After the 2012 election. Huckabee convinced himself that Mitt Romney's defeat was due to the fact that Not Enough (True) Christians came out to vote despite the fact that 78% of the electorate identified themselves as "Christian". If you're currently hearing bagpipes, there may be a reason for it.[11]

Evangelism as an influence on Huckabee's candidacy[edit]

Huckabee is a theocrat.[12]

He is, in some ways, a really creepy guy. He worked hard to bring "covenant marriage" to Arkansas. Covenant marriage is a formal status in which the couple is not eligible for "no-fault divorce" - people who sign up for this form of "super marriage" must show a reason for divorce such as abuse or neglect. This is as opposed to the usual situation where "irreconcilable differences" are sufficient cause for divorce and is similar to how divorce laws worked before 1970. Obviously, this was designed to bring the definition of "marriage" more into line with his Christian fundamentalist viewpoint. After the passage of the law Huckabee converted his own marriage to a "covenant marriage" - though he is the only high profile Arkansan to have done so.

Actions such as this should be a warning to those non-evangelicals who would support Huckabee for President, and a reminder that for the evangelical politician, there is no division between church and state.

He is, in other ways, still a really creepy guy. In the wake of fucknut Missouri Senate candidate Todd Akin's gaffe "misstatement" concerning the subject of "legitimate rape" and whether or not strangely anonymous doctors actually told him that the female body could prevent pregnancy in the wake of such an event,[13] he used his radio show to suggest that rapes - although "horrible tragedies" - could produce admirable human beings.[14][15] This seems rather beside the point, since using the supposed positive outcome of a vicious sexual assault to provide political cover for a candidate's verbal blunder seems - to be accurate - really creepy.

He also paroled rapists and murderers vouched for by fundie pastors, arguing these criminals see the divine light while in prison. Wayne DuMont is one of these, a violent criminal who committed several murders and rapes and murdered again after being freed.[16]

Mike Huckabee blamed the Sandy Hook massacre on the separation of church and state saying "We ask why there is violence in our schools, but we have systematically removed God from our schools."[18] Does this really have to be debunked?

He has used the infamous bumblebee argument to try to show that science doesn't know everything. Speaking about the bumblebee he said:[19]

Logic and modern aeronautical science notwithstanding, Huckabee clings to the notion that science is to be ignored.

He also has reservations about evolution. Apart from the famous "hand raising" at the first Republican debate (where he, Tom Tancredo, and Sam Brownback raised their hands to the question, "who doesn't believe in evolution?"), he said recently:[20] "If you want to believe that you and your family came from apes, that's fine. I'll accept that. I just don't happen to think that I did."

On a recent episode of the Colbert Report, Huckabee reiterated his belief that, regarding evolution, "it's all a farce."[21]

Optimists among us may hope that, while Huckabee's private views on religion are surely radical, they would not seep into his political life. His record as governor, however, conveys the exact opposite conclusion: under Huckabee's tenure, science education languished, as if the modern scientific apparatus were the target of a renewed witch hunt.[22]

Mr. Huckabee has been careful to avoid actually saying that he believes the Earth is six thousand years old. When he was asked by Wolf Blitzer if the creation of the Earth occurred six thousand years ago and only took six days, as stated in the Old Testament, Huckabee said, "I don't know. I wasn't there."[23]

He has claimed that angels guide his bullets when he hunts. Seriously.[24]

See our Ten Commandments article for reasons why they would make a very bad basis for any country's law.

In a statement that harked back to the days of Orval Faubus' school segregation in Arkansas, Huckabee stated that individual states can ignore Supreme Court rulings on gay marriage.[26] (Hint: they can't)

The art of the publicity stunt - a.k.a., The 'Huck and Chuck' Show[edit]

When Huckabee was lagging in the polls, he resorted to a number of publicity stunts to raise awareness of, well, his existence — including several appearances on the TV show The Colbert Report. When Huckabee's poll numbers lagged below 5% in November, for example, he even promised host Stephen Colbert the vice presidential spot on his eventual (and, then, impossible) Republican presidential ticket. Later, Huckabee reaffirmed his commitment to Colbert.[27] Despite his front-runner status, fostering the image of the "involved" and "hip" candidate was clearly his goal.

Huckabee also gathered the support of prominent creationist, actor, and butt-of-jokes Chuck Norris. For example, when Huckabee appeared with him in a TV ad, the candidate proclaimed: "My plan to secure the border? Two words: Chuck Norris."[28] So far, Huck has remarkably coasted on style more than substance, leading to wild support among evangelicals (who merely demand to see a creationist before they give their support), and wild opposition amongst the Republican Old Guard.[29]

As the election cycle unwound, and we were treated to Governor Huckabee being on the Colbert Report for the nth time, Governor Huckabee making fun of his math skills and lack of awareness of the primary delegate structures on Saturday Night Live, and Governor Huckabee playing bass in random pickup bands at hoot nights…[30] the question had to be asked: "Governor Huckabee… parodist?… or the real thing?" We may never know how this stalwart of strangeness would have run the United States, since he won't (at least, we hope not[31]).

Further proof of the previous sentence[edit]

Huckabee ran into a controversy concerning his continued support of the Duggar family when it was revealed that Josh Duggar had contacts with the police in the past concerning child molestation allegations dating back to when he was a teenager.[32] Huckabee went into attack dog mode on Facebook in the wake of the charges[33] and actually seems to have lost a significant amount of his supporters there as a result.[34]

In addition, he considers the boycott against Chick-Fil-A for its donations to anti-gay groups "economic terrorism" but is perfectly fine with calling for the exact same policy against Frito-Lay for selling colorful tortilla chips, because, well, the "homosexual agenda". Or something.[35]

See the main article on this topic: Gold standard (economics)

"Owning gold is like having natural financial immunity against the plague of socialism." — Hucksterbee

Following in the footsteps of another failed presidential candidate, the Huckster has started promoting gold investment.[36]