Child sexual abuse is a form of child abuse typically defined as any sexual activity performed by an adult on a child or any unwanted or inappropriate sexual behavior by another child.[1] The term "child" varies between jurisdictions but is generally considered to be someone who has not reached or not completed puberty. Child sexual abuse is usually distinct from statutory rape, which involves an adult and a minor under the age of consent (generally around 14-21, depending on the laws of different states and nations), with apparent (though, by definition, not legally valid) consent being a major distinguishing factor.

Child sexual abuse poses extreme and irreversible developmental risks to children. It was formerly widely believed by the public that such abuse was rather rare, but in the 1980s, large numbers of victims began coming forward with their stories, greatly raising the profile of the problem. It is now believed that at least one in 10 people have been sexually abused as a child.[1] Approximately one-third of victims are boys, while two-thirds are girls.[3]

It is not to be confused with pedophilia.[4] Many pedophiles choose the route of Christian homosexuals and refrain from acting on their urges for moral or practical reasons. Some pedophiles, convicted and otherwise, have undergone physical or chemical castration to limit the risk they present to others.

It has been estimated that there are over 50,000 child brides worldwide at any given time. UNICEF defines child marriage as: "a formal marriage or informal union before age 18",[5] and many child brides are very young, not having yet reached puberty. In some places, children are married as young as 9 or 10 years old. India is often claimed to have the highest rate of child brides; however, the practice is also found in Guatemala, Niger, Pakistan, and Afghanistan; in all cases, rural, uneducated, and impoverished areas have the highest incidents of child marriage. In early 2014, the practice came briefly into the news when Iraq announced it was drafting a law that would legalize marriage as early as 9.[6] These countries have long cultural and religious traditions of marrying young girls—marriages which today are likely to be consummated at the time of marriage and not after the child has begun menstruating.[7][8] In 2016 child marriages became illegal in Gambia and Tanzania, which it is hoped will reduce the problem in those nations.[9] This is even a problem in the United States, with it being effectively legal in 44 states and 20 states not even having a minimum age.[10] At least 300,000 children have been married in the U.S. since 2000, most of them being young girls married to much older men.[11]

In the early 2000s, multiple hundreds, if not thousands, of charges that priests in the Roman Catholic Church had committed sexual assault on children came to light. With each new story, more adults who had been abused as children stepped forward to add their voices despite pressure on them to keep silent. The vast majority of these incidents had been covered up by the Church itself. The priest was moved to a new parish, often without punishment or counseling. And often, the priest re-offended in the new parish without parents knowing he was a danger to children.

Several stories in recent years have demonstrated that there has been long-running abuse of young boys within the Yeshivas and the bathhouses. It is highly alarming that the local Orthodox authority will try to pay off the families to keep them quiet. Failing that, the local Orthodox community shuns anyone speaking out about such abuse.[12]

Similarly, in a closed, tight group like Jehovah's Witnesses, which can use threats of disfellowshipping and shunning (see Jehovah's Witnesses glossary), it may be harder to report instances of abuse. There is evidence of systematic abuse within the movement in both the United States and Australia.[13] 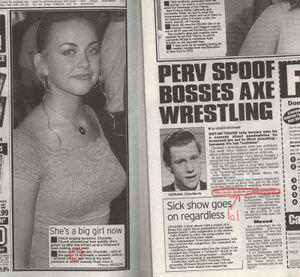 In the mid-1980s, some people involved in the daycare industry (caring for other people's children while they were at work) in the U.S. were accused of various levels and amounts of sexual abuse of children in their care, often in connection with Satanic ritual abuse. Of prime note is the Amirault family daycare scandal, which put several adults in jail. Although the evidence against them has been debunked, the Massachusetts Supreme Court upheld all of their convictions on the grounds of "finality" (i.e., that reopening it would be "unfair" for the alleged victims — no concern for whether it's "unfair" to have been wrongly convicted, of course). All those convicted are free on probation or parole but still considered legally guilty and subject to being registered as sex offenders, forbidden contact with children, etc.[14]

, which resulted in two hung juries and an eventual dismissal with prejudice.

These daycare incidents helped set off the "memory war" and scientific drama hurricane surrounding the research of Elizabeth Loftus.

Many individuals and organizations (namely Paul Cameron,[15] the Family Research Council,[16] and Focus On The Family[17]) opposed to societal acceptance of homosexuality claim that homosexuals routinely abuse children sexually as a means of "recruiting" them into the lifestyle and claim that part of the "homosexual agenda" is the reduction or abolition of the age of consent. These claims are usually justified by pointing to NAMBLA, Catholic sexual abuse cases, or other scandals involving male victims of adult male abusers (Jerry Sandusky, Mark Foley, etc.). There are several problems with this assertion:

Even unrelated to any sort of "gay agenda", various conspiracies that imply that homosexuals are pedophiles have been made. Another relatively popular assertion by individuals such as Mark Peeters and Laurent Louis is to claim that Belgian prime minister Elio Di Rupo, the first openly gay man to serve office anywhere in the world, is a pedophile.

No matter how clear the harm is, research on the issue has been clouded by the simple fact that the best available research methods are unusable in studies of sexual abuse. For example, it is unethical and despicable to randomly allocate children to experience sexual abuse. Not surprisingly, research on the subject is challenging. Pope & Hudson, 1995, argued that many studies "are so severely vulnerable to selection bias, information bias, and lack of consideration of confounding variables that they are rendered almost valueless."[25] Assessing the specific harm of child sexual abuse can be obscured by the effects of a non-supportive family environment, even more so when researchers rely on small sample sizes.[26] To counter that, large national-level samples must rely on self-reports of more broadly defined sexual abuse that, combined via meta-analysis, are further watered down.[27]

Despite the complexity of sexual abuse research, twin studies convincingly show that actual specific harm can be tied to various levels of sexual abuse.[28][29]

The research itself is too easily discounted by casual reading and methodological challenges. When, for example, a researcher shows that labeling a person as an abuse victim causes harm, a quick reader might miss that the actual findings are that the labeling harm occurs "[i]n addition to any direct, negative effects of CSA."[25] However, as one study shows, the label a victim applies to describe the experience has very little to do with the actually experienced harm.[30]

However, even researchers who cast doubt on the sequelae of child sexual abuse remain convinced that such sexual contact with children is wrong since "children are incapable of consent"[31] and that "[i]t would be ludicrous to suggest that CSA, in and of itself, does not have damaging influences on the adjustment of the child".[25]