Not to be confused with the Battle of the Buffet

Pizzagate is the (admittedly rather silly and unoriginal) name of an actual conspiracy theory claiming that Hillary Clinton is secretly involved in a pedophile ring centered around a pizza restaurant in Washington, D.C.[1] This outlandish theory was spawned from a highly peculiar pattern-analytical reading of the hacked emails leaked by Wikileaks belonging to John Podesta,

then-manager of Clinton's 2016 presidential campaign, as the highly suspect code phrase "cheese pizza" figured among said correspondence.[2][3] The fact that the mention of cheese pizza was much more interesting to some people than the actual emails of any possible importance whatsoever

says something about the conspiracy crowd.[note 1]

The Pizzagate theory was initially promoted and popularized on the notorious Poe-nest 4chan and on Reddit. It spread quickly over various fake news websites, as well as social media platforms such as Facebook and Twitter, and culminated in an armed man, arguably acting on the suggestion of one Alex Jones,[4] entering the lion's den pizza parlor in question, rifle in hand, to "self-investigate" the claims in December 2016.

The foundations of Pizzagate were laid by 4chan trolls scouring Clinton-related emails released by Wikileaks, looking for dirt.[note 2] They found a series of emails which mentioned the pizza parlor Comet Ping Pong

in Washington, D.C.,[note 3] having seen occasional use as a venue for DNC fundraising events.[5] Because life is random, the phrase "cheese pizza" happened to be an inside joke referring to child pornography on 4chan.[note 4][6][7] Thus, users started to fabricate a conspiracy theory around the mention of this generic food item in the Podesta emails, soon speculating up a storm. Based on this diligent research, they quickly concluded that Podesta, Clinton and others were all part of a clandestine pedophile ring operating out of the innocent-looking pizza parlor.[8] The conspira-trollery eventually flooded Reddit, where, on /r/The_Donald/, redditor "DumbScribblyUnctious" collected all the dubious conspiracy theories into one giant screed titled "Comet Ping Pong — Pizzagate Summary".[9]

For the simple reason that this inherently borders on actual absurdist comedy, the popularity of the Pizzagate manufactroversy increased exponentially, with theories about the supposed conspiracy quickly growing ridiculously complex and lengthy.[8] Professional insanity dispenser Alex Jones fanned the flames by adding his own conspiratorial twist, posting an InfoWars bulletin titled Pizzagate Is Real: Something Is Going On, But What?,[10] where he told viewers that "you have to go investigate it for yourself",[4] neglecting to factor in that his viewers might actually be impressionable enough to take his suggestions to heart.

As Pizzagate blew up on the internet, the hashtag #pizzagate began trending on Twitter.[11] Comet Ping Pong suddenly gained a massive amount of followers on Instagram, along with numerous death threats.[note 5] The conspiracy theory was actively spread on Twitter by a number of Trump supporters, a mob apparently still consumed by Trump's (later completely abandoned) "crooked Hillary" narrative, desperate for any scraps of manufactroversy that could realize their wet dream — to "lock her up".[8][note 6]

Turkish media outlets loyal to sultan president Recep Tayyip Erdoğan responsibly decided to publish articles promoting the Pizzagate conspiracy theory.[12] Aside from the goal of generally stirring anti-American sentiment in Turkey, the stories were likely meant to deflect from a sexual abuse scandal implicating a charitable foundation with ties to Erdoğan's ruling party, and to distract from crackdowns on dissent after the attempted coup of July 2016. 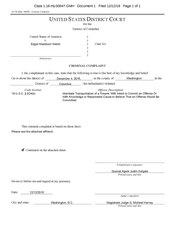 As Pizzagate propagated across social media through various fake news outlets, with strategic command in charge of Hillary-bashing operations taking the hysteria to a new level, many people, lacking the apparent ability to tell fact from fiction, took the whole production for a real news story. One such misguided individual — 28-year-old Edgar Maddison Welch from Salisbury, North Carolina — decided to respond to Alex Jones' impassioned pleas for General Kenobi someone to take matters into their own hands and "personally investigate".[4]

Welch ominously stepped inside Comet Ping Pong on December 4, 2016 at around 3 p.m., when the parlor was packed with customers.[13] And Welch hadn't come alone, either (making his entrance brandishing a loaded rifle), supposedly on a mission to "self-investigate" the Pizzagate conspiracy.[note 7] Understandably, employees and diners alike made like a tree and left the scene. In a sense, Welch had successfully managed to drain that particular NWO swamp. According to his own post-arrest words, Welch "fired off some rounds". Thankfully (though oddly, perhaps battling some kind of Pizzergeist?), he only fired his gun once he was alone in the parlor.[13] Soon after, he was promptly arrested after surrendering to police.[14][15][16][17] Welch later stated that:[18]

While Welch first heard of the Pizzagate conspiracy through word of mouth, he confirmed it was the barrage of nonsense on the internet that led him to believe his actions were warranted.[18][note 8]

I want our viewers and listeners to know that we regret any negative impact our commentaries may have had on Mr. Alefantis, Comet Ping Pong, or its employees. We apologize to the extent our commentaries could be construed as negative statements about Mr. Alefantis or Comet Ping Pong, and we hope that anyone else involved in commenting on Pizzagate will do the same thing.

At some point, the InfoWars apology was deleted from the web site.[note 9] Taking and bearing responsibility is too much effort.

In May 2019, an FBI memo from the Phoenix Field Office designated several political conspiracy theories (QAnon, Pizzagate, HAARP, New World Order, Sandy Hook massacre) as domestic threats with the potential to incite violence.[21][22] As evidence, the FBI cited arrests for criminal activities associated with the theories.[22]

His comments attracted national attention and even resulted in him being fired from Trump's transition team. Even after his sacking, Flynn shared several tweets by Gamergater and lawyer Mike Cernovich, showing continued support for the conspiracy theory and tacitly implying that he believed the gunman incident might have been a false flag operation.

THE MATH CHECKS OUT!!
See the main article on this topic: Fake news

When the unified neo-Nazi/tinfoil/clickbait front is on your side, you know you're doing it right.

Several images circulating on twitter claim to reveal the "truth" about Pizzagate. These collages are indistinguishable from displays of batshit insanity, commonly known as "crazy walls" or "serial killer walls".[34] Haig's Law may be useful here. 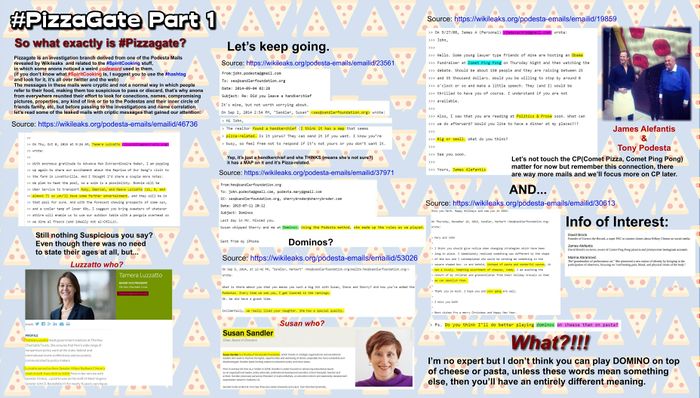 The first infographic we look at eases us into the crazy world of a nutjob. It delves into several emails from the Clinton email leak:[35][36] 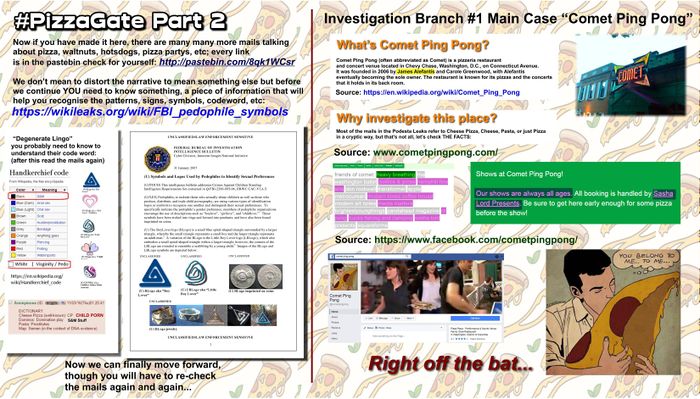 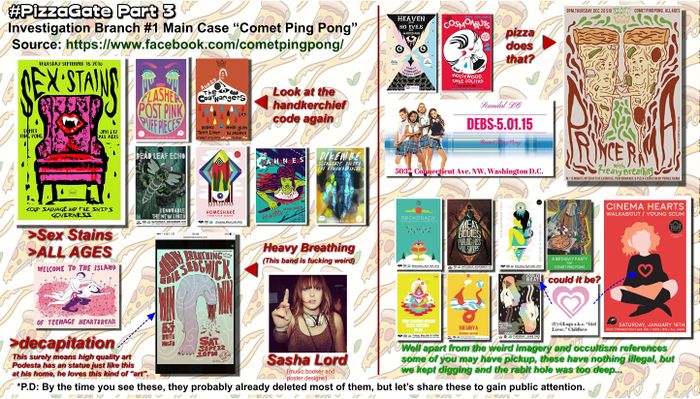 This infographic takes images off of Comet Ping Pong's FaceBook — which are band posters — and points things out with little analysis. 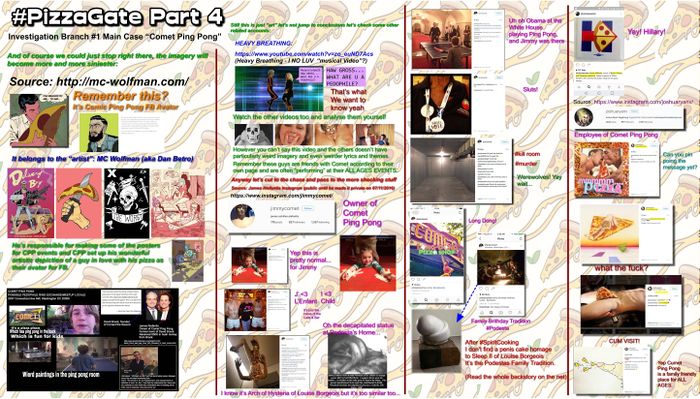 Cranks speculated that words and phrases used in leaked Clinton-related emails were pedophile codewords. (Of course, these words could also be used normally in normal conversations, but apparently cranks feel the pedophile meanings are somehow more "believable".)[46]

One (mis)infographic features an explanatory paragraph that speculates on the extent of the conspiracy and who's involved in it:[47]

It is becoming increasingly clear that many of "the elite" including high ranking politicians, celebrities and very wealthy people are operating a global sex trafficking ring. They are doing it under the guise of helping children in need (fostering, rehoming, mentoring etc). Big money is changing hands. Big players are heavily involved. Satanic rituals are involved. Freemasons are involved. The people who control everything you see, read and hear are involved.

Of course, every politician is part of the conspiracy — with the exception of Donald Trump, because he "isn't really a true politician, even as president". 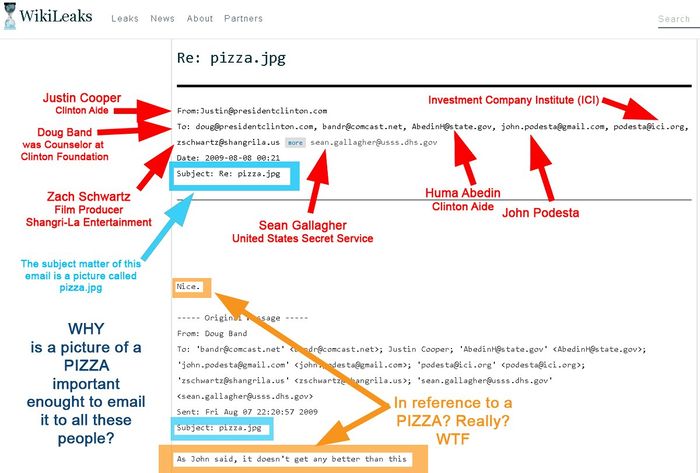 Cranks dissect the email; their arrows are colorful "enought" 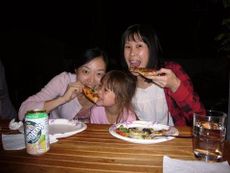 The alleged cornerstone of Pizzagate is an attachment found in a forwarded email from Bill Clinton advisor Doug Band in 2009 called "pizza.jpg". The attachment contains a photo of two adults enjoying pizza with a kid, which is supposedly evidence of child molestation; however, the email and its attachment were completely misinterpreted.[51] What "Pizza.jpg" actually shows is American journalists Euna Lee and Laura Ling along with a young girl, possibly Lee's daughter Hana. The three are eating pizza after Clinton secured their release from captivity in North Korea in August 2009. "As John said, it doesn't get any better than this," Band comments to Clinton aide Huma Abedin, Podesta, and others. "Nice", Podesta responds.[52]

No child abuse. No pedophile ring. Yet cranks continued to cook up nutty conspiracies based on the photo.[53][54]

Pizzagate was confirmed in Senate intelligence committee hearings by Clint Watts to be part of a Russian "Active Measures" online operation pushing fake news, ludicrous conspiracies, and a general pro-Russian agenda.[57][58] These findings lent support to what Glen Caplin, spokesman for the Clinton campaign, had argued previously:[59]

By dribbling these out every day, WikiLeaks is proving they are nothing but a propaganda arm of the Kremlin with a political agenda doing Putin's dirty work to help elect Donald Trump.

This is why we can't have nice things[edit] 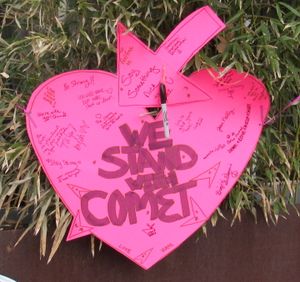 Despite the mass hysteria, the community created thoughtful art to support the Comet Ping Pong workers through the tough times.

Thanks to Pizzagate, something called "cybersteria" (i.e. public hysteria caused by internet trolls) is now a thing.[60] That means BS (like Pizzagate) brainstormed by assholes on 4chan or 8chan, picked up by the Alex Jones Infowars crazy train, amplified and spread by fake news sites, and then kept alive by Twitter trolls is something we're all going to have to live with.

Facebook is now taking the problem of fake news (and its own role in perpetuating it) much more seriously, looking into ways to identify it and stop treating it like any other trending topic in the future.[8] Thanks, Facebook — too little, too late!

A large fault with the story surrounding the Pizzagate situation is the nature of the allegations. In short, all of the "evidence" is circumstantial,

and it's not even good circumstantial evidence, either. Even if Comet Pizza does have a pedophile ring, self-investigators are doing an extremely poor job pushing their case. To date, no evidence or victims have come forward to confirm the existence of a crime of any sorts at Comet Ping Pong.[61]

John Podesta made a tweet which pissed off conspiracy theorists:[62]

Anti-Clinton conspiracy theorists and online trolls congregating on Reddit and 4chan decided that the words “pizza” and “cheese” in these emails were code for pedophilia.

They ultimately pushed the lie that my pizza restaurant was being used to abduct children and commit heinous crimes.

These lies ricocheted from shadowy chat rooms to various social-media platforms, encouraged by fake news articles and deliberately amplified by provocateurs such as Alex Jones, who broadcast these smears to his audience of millions.

After the main course it is customary to follow with dessert. In Pizzagate's case, this means the equally horrible Donutgate, with bizarre pedo ring theories centered on the quirky beloved Portland staple Voodoo Doughnut

As the Pizzagate conspiracy faded away, most of the energy in the movement got absorbed into the QAnon conspiracy theory. However, as of 2019, the ashes of Pizzagate continue to smolder on within, with some still engaged in the quest of busting up elite pedo sex rings they perceive to be running in Comet Ping Pong's basement. (Comet Ping Pong, incidentally, does not have a basement.)

On January 23, 2019, in what was possibly propelled by conspiracy theories (based on his parents earlier posting conspiracy videos pushed by "JoeM"[note 13]), Ryan Jaselskis attempted to set a black curtain at Comet Ping Pong on fire, bizarrely (but perhaps related to the conspiracy theory) leaving behind a diaper and baby food in the process.[67][68]