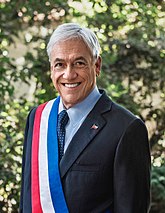 When you bring me out, can you introduce me as "the President"?

Sebastián Piñera Echenique (1949–) is a corrupt Chilean businessman and conservative politician who served as President of Chile between 2010 to 2014 and 2018 to 2022.

Piñera was born into one of the oldest and wealthiest Chilean families. His uncle, Archbishop of La Serena Bernardino Piñera, was an alleged child sex abuser; he died in 2020 at age 104 from COVID-19 (thanks to his nephew's terrible handling of the pandemic). On September 11, 1973, while attending a graduate economics course at Harvard that was taught by a Chicago school disciple of Milton Friedman, Piñera was informed about the military coup d'état in Chile that had just killed the democratically-elected socialist President Salvador Allende, and he reportedly celebrated it, shouting "We won!"[2] In the late 1970s, he received millions for introducing credit cards to Chile with the blessing of murderous dictator General Augusto Pinochet. Later, in 1982 Piñera became involved in a fraud scheme while serving as general manager of the Banco de Talca; an arrest warrant was issued against him by a judge, but Piñera went in hiding for 24 days, until the Pinochet-controlled Supreme Court got him off the hook.

His brother José, who infamously compared Salvador Allende to Hitler,[3] was Minister of Labor under the Pinochet military dictatorship and the mastermind behind the highly unpopular Chilean private pension system. Despite all of this, Piñera has tried to present himself as a moderate centrist. He even falsely claimed to have voted against Pinochet in the 1988 referendum that ended 17 years of dictatorship,[4] when in fact he was the campaign manager of Hernán Büchi (the pro-Pinochet candidate who ran against Patricio Aylwin in the 1989 presidential election); he described Aylwin as "a terrorist" and "a Marxist",[note 1] and condemned the arrest of Pinochet in London in 1998.

Piñera has amassed a huge personal fortune thanks to his shady businesses (surprising as it may seem, he's mentioned in the Panama Papers).[5] He once owned sizable chunks of TV channel Chilevisión, LAN Chile Airlines (now LATAM Airlines), and Colo-Colo, the country's most popular football team (even though Piñera is a fan of rival team Universidad Católica).

In 2005, he first ran for president but lost to the socialist candidate Michelle Bachelet. He ran again in 2009, this time against Eduardo Frei Ruiz-Tagle, who had been president from 1994 to 2000.[note 2] Similarly to what happened in the 2016 US election, almost nobody wanted a boring, uncharismatic, pro-establishment relic from the 1990s to win, so they voted for the fascist, incompetent, lying and corrupt billionaire clown instead.

The "moderate centrist" Piñera quickly filled his cabinet with vocal Pinochet apologists, such as his cousin, Andrés Chadwick.[note 3] His first term was marked by the effects of the 2010 earthquake, and by large-scale student protests and worker strikes, but specially by the international media circus around the Copiapó mining accident,

in which 33 miners were rescued after being trapped underground for 69 days. This "miracle" helped boost his popularity, but his constant blunders and Bush-level malapropisms (known in Chile as Piñericosas) made him a laughing stock and cemented his reputation as a gaffe-prone klutz. He also has a penchant for telling very inappropriate sexist "jokes".[7][8][9]

His government strengthened the already repressive Anti-Terrorism Law first enacted, fittingly enough, in 1984, during the Pinochet dictatorship (what a shocker), which effectively criminalized the indigenous Mapuche struggle for autonomy in southern Chile.[10][11]

Piñera was succeeded by Michelle Bachelet in 2014 and the Chilean people quickly forgot about him. Until… In 2017 he decided to run for president again, because why the hell not. His main rival and seemingly the favorite to win the election, milquetoast left-of-center liberal populist Alejandro Guillier, was red-baited to death by Piñera and by the even more fashy candidate José Antonio Kast, who constantly made negative and ridiculous comparisons between Guillier and Venezuelan President Nicolás Maduro, and invoked "Chilezuela", "soshulism no food" and many Cold War-era red scare tropes. They even paid a Colombian "psychic", Deseret Tavares, to warn the Chilean people about how Guillier would bring "communism" and "violence" to the country.

This campaign of terror worked, somehow, and Piñera defeated Guillier, although the voter turnout was low (48.5%).[12]

On April 2018, Piñera became the first (and hopefully the last) Chilean President to pardon an unrepentant Pinochet-era death squad leader convicted of crimes against humanity.[13] Colonel (ret.) René Cardemil, who was serving a 10-year sentence in Punta Peuco

(Chile's own Spandau Prison) for the massacre of 6 civilians in 1973, including an IMF official and a pregnant woman, was granted the pardon on "humanitarian" grounds; he died of cancer shortly after the pardon was issued.

Piñera's second term as president was relatively uneventful (well, except for the government-sponsored assassination of 24-year-old Mapuche activist Camilo Catrillanca,

[14] carried out by the Comando Jungla[note 4] in 2018) until October 2019, when his decision to raise the Santiago subway's fare was met with massive backlash,[note 5] and student-led mass fare-dodging soon turned into citywide and nationwide protests, riots, and strikes against Piñera's neoliberal policies, which, according to the protesters, have resulted in extreme poverty, increased economic inequality, low wages, meager pensions, and a high cost of living.[15][16] Oddly enough however, since 1990 Chile saw a strong growth of its income per capita,[17] with a sharp drop on income inequality[18] and has one of the best pension systems in the world.[19]

Even people that were initially supportive of him turned against his regime.[20] Channeling his mentor, Piñera blamed a crisis caused by his own government's political and socio-economic model on the Jews the Soviets globalism a "powerful enemy",[21] declared "war" on said "enemy",[22] announced a state of emergency, imposed curfew in 14 major cities, and ordered the deployment of the military for the first time since the Pinochet dictatorship to put an end to the unrest.

As a result, over 7,000 people have been arrested (Amnesty International and other human rights organizations have received several reports of abuses at the hands of the authorities, including torture and sexual abuse,[23][24] and even "suicides" by hanging while in custody),[25][26][27] at least 36 have been killed (including a 4-year-old child and 6 foreign nationals), around 6 remain missing, and nearly 11,500 have been injured, with soldiers and coked-up police[28] gunning down[29][30] or intentionally running over unarmed civilians,[31][32] setting fire to public buildings,[33][34] shooting people in the eyes with rubber bullets,[35][36][37] and piling up and then "disappearing" the dead bodies of protesters.[38][39] On October 26, after a huge demonstration which gathered 1.2 million people in Santiago and almost one million more in every major Chilean city, Piñera sacked his entire cabinet.[40] Peaceful rallies continued to be held after that, and Plaza Baquedano (commonly known as Plaza Italia), Santiago's focal point of demonstrations and drunken sports celebrations, was renamed Plaza de la Dignidad ("Dignity Plaza" or "Square of Dignity") by protesters[41] and by Google Maps.[42] On November 6, Piñera's approval rating dropped from 14% (the lowest for a president since the military dictatorship era)[43] to 9%.[44] (But hey, at least "Chilezuela" was averted… right?)

In 2020, despite coming to halt due to the COVID-19 pandemic and subsequent lockdowns, the protests intensified as a result of miserable government response to the pandemic. In April Piñera went for a photo-op in an empty square formerly occupied by protesters as a means of taunting them, only to back down like a coward and claim that he was "misinterpreted".[45] Also in October, a police officer almost killed a 16-year-old protester by throwing him off a bridge, causing renewed protests leading to the arrest of the officer involved and growing calls for defunding the police.[46] Later that month, a national plebiscite

was held and Chilean voters overwhelmingly called for a new constitution to be drafted, replacing the one that was drafted under the Pinochet dictatorship and giving a middle finger to Piñera.

Some anti-Maduro cranks, such as Julio Borges[47] ("Commissioner for Foreign Affairs" of the self-proclaimed "interim president of Venezuela", Juan Guaidó) and Luis Almagro[48] (current secretary general of the OAS) have accused Venezuela and Cuba of having a "destabilization plan" in order to foment civil unrest in Colombia, Haiti, Ecuador, Peru, and Chile.[49]

Journalists of the (otherwise reliable) center-right leaning newspaper La Tercera were pressed by editors to publish fake news about Venezuelan and Cuban nationals being involved in the Santiago subway protests, "according to Chilean intelligence sources".[50] La Tercera later retracted the story.[51]

While it conveniently fits into Piñera's narrative of a "powerful enemy" plotting to undermine his regime, this conspiracy theory is, of course, complete bullshit.[52]

During an interview with BBC on November 4, 2019, Piñera insisted that he won't resign[53] and cited grossly exaggerated numbers to portray the popular movement against his regime as a bunch of criminals and vandals. For example, he claimed that "hundreds" of buses have been burned,[54] but in reality Piñera's own Ministry of Transport has cited 25 reported incidents.[55] He also "forgot" to mention the dozens of people killed by repressive forces (claiming almost half of the injured were police officers, and that police were acting in self defense),[56] and lied once again about his role during the Chilean restoration to democracy.[57]

On November 10, 2019, John Macarewich Cobin,[58] a US-born neoliberal economist, author,[59] college professor,[60] neo-Confederate,[61] fundie, gun nut, Pinochet apologist,[62] and co-founder of Galt's Gulch Chile[note 6] who had been living in Chile since 1996, opened fire against a group of unarmed protesters in Reñaca, a popular tourist area of beaches and resorts in Viña del Mar. The mass shooting left one person seriously injured.[63] Cobin, a friend of Cristián Larroulet (former Minister Secretary-General of the Presidency under Piñera and author of a "book" in defense of Pinochet), was wearing a neon yellow vest, which signaled him as member of the chalecos amarillos, a short-lived neo-fascist counter-protest "movement".[64] On October 25, 2020, Cobin was sentenced to 11 years in prison.[65]

In the movie The 33, he was portrayed by the same actor who played the ruthless, money-laundering prison warden from The Shawshank Redemption and the villainous medical school dean from Patch Adams. Typecast much?