Christian Newswire, self-described as "The nation's leading distributor of religious press releases" is a news agency (or news wire) that focuses on the dissemination of religious (i.e. Christian) news.

News agencies traditionally feed news snippets and fully written news stories to the media. This content is normally written by journalists employed or affiliated with the agency in question. In the case of Christian Newswire it appears that journalists are eschewed in favor of charging people $75 dollars to share their news and views with the readership of Christian Newswire's news feed. This statement is partly true. They also censor by refusal any news releases which offend their particular biases, to wit, two releases supplied by www.longlifeproject.com 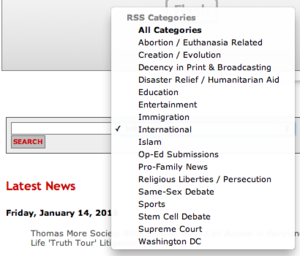 Their list of "news" categories which also doubles as a list of red-flag issues for the downtrodden right-wing Christian majority.

The only other requirement is that people with news to share have their money ready.[1]

Christian Newswire, for just $75, will publish press-releases to their list of news outlets, media organizations, and various unnamed contacts that are known only to the most Christian of news wires. As is to be expected, this includes such well regarded outlets and figures as WorldNetDaily, Sean Hannity, Bill O'Reilly, and a raft of obscure blogs and small-town radio-station with a thing for Jesus.

Quality is variable, and some releases are obviously the newswire equivalent of self-publishing. In one example, obscure author Ed Rogers is reported to have written a blog post criticizing a secret pact between Iran and Turkey.[2] In this case Christian Newswire is not so much acting as a news agency - more a paid advertising service for people who have a pro-Christian opinion or tidbit they'd like to share with the world.

In another example, Christian Newswire reported a campaign against hate crime laws that led to 11 Christians (including a "grandma") being arrested for the crime of sharing the gospel.[3] The story gives the impression of a poor grandma being arrested for simply wanting to share her love of Jesus with random passers-by. The release references the incredibly reliable and unbiased WorldNutDaily as its primary source.[4] Oddly enough though the story doesn't appear that straight-forward. The people in question are alleged to belong to the fundamentalist and rabidly anti-homosexuality group Repent America.[5] In this case the Christians are claimed to have been preaching damnation through a bullhorn, and were arrested for being obstructive and refusing directions from police officers.[6] Accounts vary, so it's difficult to fully understand the events of that day. It may have been a peaceful protest taken out of context by the police, or it could have been the equivalent of a guy exercising his right to obstruct a black-oriented parade and yell "niggers" and refuse to clear the way when asked to do so by police. Free speech issues aside, there is certainly more to this story than a simple grandma being arrested for sharing the good news.

Technically yes, but the same could be said of public relations companies, blogs, or any form of paid advertising. There is a risk of creating a misleading impression of authority when the term "news" is applied to material that anyone can submit with no apparent editorial oversight. There is no suggestion of dishonesty on the part of Christian Newswire - indeed they are very clear in describing how they function. It may be more accurate to view Christian Newswire as being something akin to an aggregator for news and opinion pieces. There is a category for op ed pieces, which in theory implies restriction of opinion and editorializing in other categories, yet a lack of editorial oversight undermines this categorization.

This is difficult to gauge. It's reasonable to assume that the bulk of their readership is found in the more conservative wing of Christianity, but it's unclear as to which major news outlets consider Christian Newswire to be anything more than a bullhorn for any nut job with $75 and an intense fear of homosexual abortionists seeking to destroy the family by marrying horses and banning God. Christian Newswire may serve a useful purpose as an aggregator of cross-denominational Christian news - with a specific focus on the "red flag" issues that bother a certain type of believer.

Many mainstream outlets are listed on their site - such as MSNBC and BBC. Whether or not Christian Newswire releases are commonly read or acted-upon is unclear. Their client list features an oddly large number of organizations with "family" in their names, including the hilariously named Catholic Family and Human Rights Institute.[7] They provide a list of "exclusive media contacts" where they have mysteriously unnamed journalists interested in conservative news, including the BBC and the popular British purveyor of despair and middle-class moral outrage, The Daily Mail.