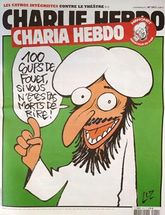 Charlie Hebdo is a satirical politically incorrect French newspaper founded in 1970. The paper generally takes a left–anarchist political position (it was even farther-left in the past) and strongly criticises religion.[2][3] From the 2000s onward, its criticism of Islam in particular has drawn significant attention: in 2006, the magazine was unsuccessfully sued by Muslim organizations for publishing the Jyllands-Posten Muhammad cartoons.[4][5]. In 2011, the magazine's offices were destroyed by a molotov cocktail.[6] In 2015, ten Charlie Hebdo employees, including its director and several major cartoonists, were killed in a terrorist attack carried out by Muslim terrorists.

"Charlie" is a diminutive for French president Charles de Gaulle (in office 1959 to 1969 - the name references a joke at de Gaulle's expense which caused the banning of the journal's predecessor), while the word Hebdo is a vernacular contraction of hebdomadaire, meaning "weekly".

Charlie Hebdo has published cartoons some consider racist,[7] though the staff and a left-wing readership have always claimed the magazine satirizes racists through mocking and exaggerating right-wing talking points and depicting mock party logos (such as Front National);[8][9]. A 2014 cover showed pregnant Nigerian schoolgirls kidnapped and raped by Boko Haram demanding welfare, which, of course, is when right-wing French people would care a lot less about their plight.[10] Commenters, however, explained that this is a double-take against Boko Haram and right-wing fearmongering (particularly about immigration and healthcare benefits), which is a typical method Charlie Hebdo employs as its satire. In another incident, after 800 peaceful Egyptian protesters, some of them from the Muslim Brotherhood, were shot dead protesting an Egyptian coup against the democratically elected Muslim Brotherhood, the magazine published a cartoon of a protester shielding himself with a Qur'an; the point of this aggressively secularist magazine is that religion won't save you.

Amidst the European refugee crisis, Charlie Hebdo published several cartoons depicting Alan Kurdi, a three-year-old Syrian boy who drowned trying to immigrate to Europe. One published after sexual attacks in Germany "said" that Alan Kurdi would become a rapist (depicted as a pig-like person) if he had survived. Given the high unlikelihood that a left-wing magazine with a leftist audience thinks it is good that the little boy drowned, as opposed to embracing a vulgar satire of anti-refugee hysteria raging in Europe that the magazine is against, many reasonable people assume the intent of the rather distasteful cartoon was the latter. Other writers have pointed out that using drowned Syrian children and raped Nigerian schoolgirls is still using marginalized people as ambiguous props which only emboldens racists and might belie the unconscious racism at worst and indifference at best held by the cartoonists themselves.[11]

Controversy arose when a cartoonist working for the magazine named Siné wrote an article about the possible marriage of Jean Sarkozy (son of President Nicolas Sarkozy), that could be interpreted as antisemitic.[12] Publisher Philippe Val fired Siné (then aged 80), who soon retaliated by creating his own newspaper, Siné Hebdo (now discontinued).

The paper strongly opposes Islamism, classifying it as a totalitarian threat alongside fascism, Nazism and Stalinism.[13] They reprinted the Jyllands-Posten Muhammad cartoons, leading to criticism.[14] In November 2011 the paper responded to the victory of an Islamist party in Tunisia by jokingly announcing that its next issue would be edited by Muhammad; the cover for this issue featured a caricature of Muhammad and the usual title defaced with a banner reading Charia Hebdo. The day after the announcement the offices of the newspaper were destroyed in a petrol bomb attack.[15]

In September 2012 the magazine decided to feature several satirical drawings of Muhammad highlighting the Islamic overreaction to Innocence of Muslims.[16] The French government immediately closed several embassies and schools worldwide, concerned about retaliation.[17] Through Foreign Minister Laurent Fabius, the French government reinforced the right of the French media to free speech, but seemed largely frustrated that this particular publication was simply "throwing oil on the fire" in an attempt to gain publicity. Echoing Fabius, the White House questioned the judgment behind releasing these cartoons.[18]

Reaction from other French media has been mixed:-

This publication has reignited the discussion of limits to freedom of expression, and responsibility of the press.[19][20]

On 7 January 2015 Charlie Hebdo's headquarters in Paris[21] was assaulted by two heavily-armed cowards. The attack caused the death of twelve people, including the magazine's editor, Stephane Charbonnier — widely known by his pen name Charb — plus his police bodyguard Franck Brinsolaro, assigned after the 2011 death threats. Also among the victims were well-known cartoonists Cabu, Honoré, Tignous and Wolinski, and one other police officer, Ahmed Merabet.[22] A further 7 were wounded.

Two brothers aged 34 and 32, Saïd and Chérif Kouachi, were the prime suspects. They came from the 10th arrondissement of Paris and had recently returned from Syria.[23] The identification was made from an ID card left in the getaway car.

On 9 January, after hostage-taking in the small town of Dammartin-en-Goële, both the Kouachi brothers were killed in the course of a police assault.

The last editorial cartoon was headed Still no terrorist attacks in France, above a sketch of a bearded man with a rifle slung over his shoulder. The character is saying "Wait. Season's greetings are good up till the end of January."[24] The last tweet had a cartoon of the Islamic State terrorist group leader, Abu Bakr al-Baghdadi,[25] with a caption, "Best wishes. To you too, Al-Baghdadi." Baghdadi replies, "And especially good health."[26]

Many world leaders and media outlets condemned the shootings as an attack on freedom of speech and freedom of the press. For example, Irish Prime Minister Enda Kenny described it as "a direct attack on the basic values of freedom of speech and of tolerance". French President François Hollande used the No True Scotsman fallacy by stating that the terrorists were "fanatics who have nothing to do with the Islamic religion", although this may have been said in order to prevent reprisal attacks.[27]

Although some papers did reprint the cover images, such as the cover of German tabloid B.Z. and every major Danish newspaper except Jyllands-Posten, in reality, much of the world's media self-censored and refused to show or print the controversial cartoons. BBC News showed several covers of Charlie Hebdo on air, but specifically mentioned that they would not be showing the ones depicting Muhammad. The New York Daily News even went as far as pixelating the cover image that led to the 2011 firebombing in their online article.[28]

Despite signs in Paris proclaiming "Not Afraid", it seems maybe that many of us are afraid. By contrast historian Tom Holland and some others tweeted Charlie Hebdo's cartoon of the Prophet Muhammad. Holland wrote:

The editor of Private Eye, a UK satirical twice-monthly which is in some ways an analogue of Charlie Hebdo, printed the following tribute in the next edition:

On the other hand Pope Francis argued that anyone who cursed his mother could expect a punch and suggested that violent reactions are similarly normal if faith is ridiculed. Polly Toynbee, writing in The Guardian, called it "the wife-beater’s defence".[30]

The issue following the shooting again featured a cartoon of Muhammad, this time weeping and proclaiming "All is forgiven." An initial print run of five million sold out before most people were out of bed.[31] Other media including the Italian Corriere della Sera, German Frankfurter Allgemeine, The Guardian and the Washington Post also published it.[32][33]

In response, a number of anti-Charlie Hebdo protests erupted in Islamic countries around the world. They ranged from peaceful marches to violent riots, including one in Niger that resulted in a number of churches and the French Cultural Centre in Zinder being set ablaze, and 10 people killed.[34] A terrorist attack in Copenhagen on February 14 against a gathering of people supporting Mohammed cartoons and a synagogue, which left 2 innocents dead, is believed to have been inspired by the shootings in Paris the previous month.

A 2nd Tehran city-sponsored[35] Holocaust-denial cartoon contest was announced in 2015—this one in response to the Hebdo attacks.[36]

Something called the Institute for Political Economy produced a very poorly reasoned internet essay suggesting that the true purpose of the attack was to "cow France and place France back under Washington’s thumb." The article was dated January 13, two days after 1.3 million very un-cowed French people had marched through Paris expressing defiance. Washington's official interest in the event was minimal — the highest ranking dignitary from the USA was the Ambassador, and she was positioned well back from the front row of heads of state.[37] As of 2016 Charlie Hebdo is still defiantly mocking Islam and a great deal else while threats continue.[38]

Kerry Cassidy commented on 11 January "Anyone who had any doubts about this being a False Flag should now be fully aware that this incident has been faked. Among the questions that remain are who was actually killed within the offices of the paper if anyone and if they weren't killed, where are they?"[39] Later the same day Cassidy was fretting about the shoe that one of the terrorists picked up and put back in the getaway car. She wrote "Uh, really? Where did the random SHOE come from and why would he pick it up? He is apparently wearing 2 shoes so it isn't his!!"[40][note 1]

Two weeks after the massacre, the French weekly current affairs magazine L'Obs (formerly Le Nouvel Observateur) published a guide to the main theories dominating what it called "the conspirasphere," citing eight websites or blogs as typifying the rumours that were current at the time.[41] Kevin Barret, a former Islamic Studies professor from UW Madison compiled a collection of essays called We Are Not Charlie Hebdo[42] by conspiracy theorist, antisemites and even an anti- Zionist Jew. Barrett claimed that the Mossad has staged the attack to vilify Muslims. Globalresearch also claimed that attack was a false flag.[43]

In May of 2015 the French daily Libération accused French intellectual and sociologist Emmanuel Todd of committing "blasphemy against January 11"[44] (the date of French street rallies in support of Charlie Hebdo) with the release of his enormously controversial book, Who is Charlie?[45] On August 28, 2015, the Guardian reported Todd's book "is now being published across the world with a preface warning that in all western societies 'a Charlie lies slumbering' – a horrific event that cleaves society apart and sees the highly educated and well-off stick their heads in the sand."[46]

Todd's thesis is that the largest French demonstrations happened in "historically Catholic and reactionary regions," and constituted "an affirmation of the middle class’s moral superiority and domination, and their Islamophobic quest for a scapegoat," which gave "a sudden glimpse of totalitarianism."[47] A similar point of view is seen in interviews of various French citizens, leftists, and officials in the documentary, Je Ne Suis Pas Charlie.[48]

When the cover article's target stops being Muslims...[edit]

Back in 2015, when Muslims were being mocked, one, with no background knowledge of Charlie Hebdo, could not only defend Charlie's right to publish offensive cartoons, they also had to defend their content, i.e. it couldn't be criticized for being "crass" or anything.[49]

But later, in 2017, when the target changed to Texans who had been killed in the floods (and who, because Texans largely voted for Donald Trump, were conflated with neo-nazis), many former defenders, who have no background knowledge of Charlie Hebdo, shifted to being against Charlie because the cartoon was "crass", some sticking to that and others reaffirming its right to free speech.[49]

One can conclude two things (both Glenn Greenwald quotes):